Ramadan Around the Globe Series:

As someone who has never experienced a Ramadan outside of the US and Canada, my emotions were all over the place this year when I realized I would be spending my first Ramadan in a Muslim country.

I wasn’t sure what to expect but there were many things I was looking forward to. Whenever a fellow foreign student would find out that I would be spending Ramadan in Egypt, they would immediately respond by saying that Ramadan in Egypt is an amazing experience. Alhamdulillah, I’m glad to say that it has exceeded my expectations and Ramadans in the West will now be bleak in comparison.

Every year, the Egyptian government puts a time change in place for the country. Clocks are set back one hour the night before every Ramadan so that workers can still be productive during their day, and for other reasons such as being able to break their fasts at home and not at their workplace. I thought this was strange at first, but the time change did help us when taraweeh and tahajjud prayers would end late with work/school the next morning. The clocks are then changed again to their ‘normal time’ the night before Eid prayer.

A lot of people may feel that these decorations are imitating the disbelievers, and I’ve even heard that they are an innovation. I cannot speak on this matter but I can definitely say that coming from a non-Muslim country and always seeing decorations for their holidays, it made me happy to see decorations for our special month. 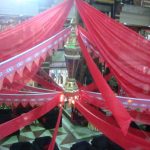 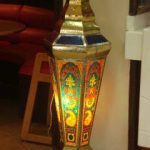 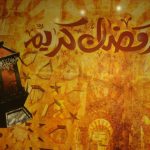 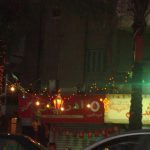 Decorations outside of a building 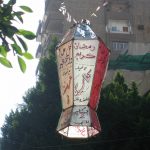 Fanoos/Lamp hanging in the street

The Masajid and Taraweeh Prayers

For Muslims in the West, we are deprived of hearing the adhan outside of a masjid but in Egypt, there are multiple adhans every prayer echoing through the streets. For those of us coming from the West, I find hearing the adhan to be a surreal experience that we can never get bored of or used to.

When Ramadan was announced after maghrib prayer on Wednesday, we immediately started getting ready for taraweeh prayers. The first dilemma came when we tried to figure out which masjid to attend. Alhamdulillah, one of the best things about being in a Muslim country is that there are masajid everywhere. Literally. There are more than five masajid within a five minute walking distance from my apartment! We finally decided on Masjid Bilal, a masjid right around the corner from us, which is a favorite among the foreign students and native Egyptians alike. The Imam, Shaykh Reda AbdulMuhsin, is known for his distinct voice, his not-too-long and not-too-short prayers and his beautiful qunoot supplications. The masjid is also famous for its beautiful and huge garden, where men and women pray for taraweeh because of the huge number of worshipers. [Their garden is also famous for having some interesting creatures come for prayer; like frogs, snakes and the famous egyptian ants :) ]

Praying in Masjid Bilal reminded me of praying in Makkah. I would feel that I was in the haram with Shaykh Reda’s beautiful voice, praying outside under the stars, praying with hundreds of Muslims and the breeze that would come every so often.

Although I prayed in other masajid like Masjid Salam (with Shaykh Ahmed Rajab), Masjid Bilal was my favorite. 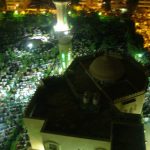 Masjid Bilal on the 27th Night 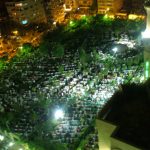 Masjid Bilal on the 27th Night

One thing that really struck me about taraweeh was the sheer number of worshipers. Seeing hundreds of Muslims praying together was an emaan boost for someone coming from a masjid on the east coast that would have maybe five rows of sisters on a good night. During the odd nights of the last ten nights, I’m positive that nearly if not more than a 1000 people were praying at the masjid! It was amazing just to think that this was only ONE masjid in the city, and there were hundreds of more masajid with just as many Muslims coming together to worship Allah.

I thought the suhoor drums were just a legend, until I heard and saw the man with my own eyes. I don’t know what this man’s name is in Arabic, but he goes through the streets at a certain time every night beating a huge drum to wake people up for suhoor, or the pre-dawn meal.

In some parts of the city, he will come right under your window or building and yell out your name with a “time for suhoor! time to wake up! worship Allah!” poem or some sort of variation.

I really loved this and thought it was beautiful to see someone going through the streets in the middle of the night to wake up others. Allah subhanahu wa ta’ala says, “and help one another in righteousness and piety.”

Dates through a Window

If you ever happen to be on the road during iftar time in Egypt, you will be given dates, fruits, juice and other things through your car window. The men will stand on the side of the streets with bags of dates, water, bananas, dried apricots and tamarind juice to give out to the Muslims to break their fast.

It is an emotional experience the first time you see this, because these men do this on their own – they bought the food, packaged it, and wait on the side of the road, seeking the reward of Allah subhanahu wa ta’ala. May Allah reward them for every person that broke their fast with their food.

Eid celebrations and prayers were wonderful. There is only one Eid prayer here, so if you miss that one then there is no way for you make it to another one. The Eid prayer took place at 7AM, about two hours after Fajr prayer. Having Eid prayer so early meant that families had the rest of the day to spend time with each other and celebrate. We started hearing the Eid takbeerat from outside shortly after Fajr prayers, and the closer it got to Eid prayer, the more we could hear the different masajid’s takbeerat in our apartment and throughout the streets.

Having Eid in a Muslim country makes it very easy to practice the sunnan of the Prophet (sal Allahu alayhi wa sallam) such as taking two different routes to prayer, walking to prayer, and praying in a large open space.

During Eid, the streets of Cairo are unusually quiet, except for the kids who love playing with these loud firecrackers. :)

Alhamdulillah, overall my Egyptian Ramadan and Eid experience was amazing and I hope that all of us can spend Ramadan in a Muslim country one day, inshaAllah.

Eid Mubarak to you and your families! May Allah accept our fasting, our prayers and our supplications, and may He grant us the opportunity to worship Him in many more Ramadans to come. Ameen.