UPDATE: Came across this interesting State Department’s daily press briefing. Scroll towards middle-bottom half. Apparently, the Imam may be under clear instructions not to talk about Park51, likely to avoid conflict of interest. He is on state business and can’t use a taxpayer supported trip to “fund-raise”. However, still can’t see why he shouldn’t talk about the controversy (not equal to promoting the project).

Let me preface the post by mentioning that the injection of “radical” into the title was purely tongue-in-cheek!

True radicals would be offended by the use of radical for Imam Faisal Rauf, whose message today was as soft as his voice. As part of a State Department sponsored visit, the Imam visited Fanar Islamic Cultural Center and gave the Friday khutbah (sermon). Afterward, I was able to sneak in a couple of questions, though I wish he would have answered more. A press black-out was in effect, though loosely enforced. After the khutbah, I also had a chance to have a chat with the cultural attaché of the US Embassy in Qatar.

In the khutbah (audio below), Imam Faisal talked about the meaning of shahadah and its true implications. He reminded Muslims that we have to move beyond Islam to Iman and Ihsan. He asked if we think our prayer is equal to the prayer of the Prophet (S), and if it is not (which he agreed was not), then how do we close the gap between the acceptance and the essence of the Prophet (S)’s prayer vs. ours.

He reminded everyone about the Prophet (S) being a mercy to mankind and that means that we as followers have to also be part of that mercy. The khutbah can be heard below.

Unfortunately, the Imam did not talk about the “Ground Zero Mosque”, which was the big elephant in the room. An AP photographer was in the crowd and kept taking pictures with his giant professional camera, much to the chagrin of the musaleen. I also snapped a few pictures in the beginning but with my small, silent Canon camera  : -)

After the khutbah, I made my way into the front, shook hands with Imam Faisal, introduced myself as an American Muslim and a blogger for MM. I told him that we have been following the issue of the Cordoba House/Park 51. I attempted to audiotape the session, but unfortunately the tape’s too grainy to play here, so I’ll try to transcribe, and make up for the gaps:

MM: Imam, we have been obviously following the matter very closely
Imam: I’m sure you have

MM: We are wondering how it [the controversy] has affected your trip here?
Imam: Alhamdulillah, it hasn’t. But, except that I have been getting less sleep [kind of half-serious]. Everyday, [I spend] 2-3 hours following the issues of the day.

MM: A lot of people are asking. Do you feel that you are needed more there. Do you feel that it would have been prudent more to be there [in America] than here?
Imam [the voice was fuzzy here so this may be less than perfectly accurate transcription]: That’s a difficult question but the decision was made/justified to stay on course with the program. [And I think he said he was content with that]

I tried to grab him again after he prayed his sunnah, but he had to go, and frankly, he seemed a bit annoyed at this point. I can imagine the stress he is under, and that he is probably constantly bombarded with this issue. However, I do feel that at this time, he needs to be even more open to questions and answers and be front and center discussing the issues, and making himself available at every opportunity.

Afterwords, I engaged in a discussion with the cultural attaché (a friendly guy named Kevin) and another American friend about the visit. I asked him about the purpose of the Imam’s visit. He said the purpose was to improve inter-faith understanding and religious tolerance (I assume he meant highlighting American values of tolerance).

My friend and I asked him about the big elephant in the room, the issue of Park51 and why it was ignored in the khutbah? We mentioned that everyone knows of the issue, so its not like it can be swept under the rug, rather it needs to be brought up by the Imam to highlight that the bigotry against it is not an American value. If the purpose is really to convince Muslims that America is good to its Muslim minority, then the Imam’s closeness to the issue necessitates that he discuss the fiasco and refute the bigotry. Kevin seemed to agree, and our hope is that he would pass that message to Imam Faisal.

As others have mentioned and I alluded to, it just seems Imam Faisal is not taking the bull by its horns, and rather perhaps feels/hopes that the issue would just disappear. Perhaps he is the shy/quiet kind, definitely very soft-spoken and finds these situations uncomfortable. But no Muslim is comfortable these days because how the issue has pitched Muslims against non-Muslim Americans, as a result of a successful campaign by the worst bigots that America has to offer, Robert Spencer and Pamela Geller (who by the way are also in bed with white supremacist groups).

So, my message to the Imam, if you ever read this: Pls stand up and be heard. 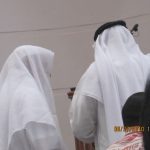 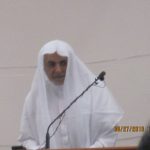 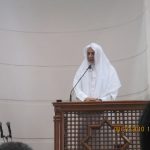 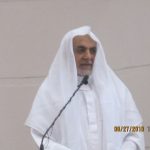 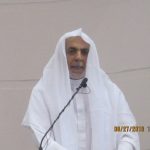 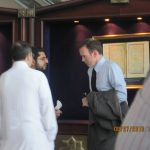 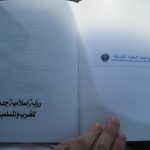 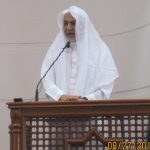 One of the photos is a book, What’s Right with Islam: a New Vision for Muslims and the West” translated into Arabic from English by Imam Faisal, given free of charge by the US Embassy.

P.S. I have a grainy video of the khutbah, not sure if it has any benefit?