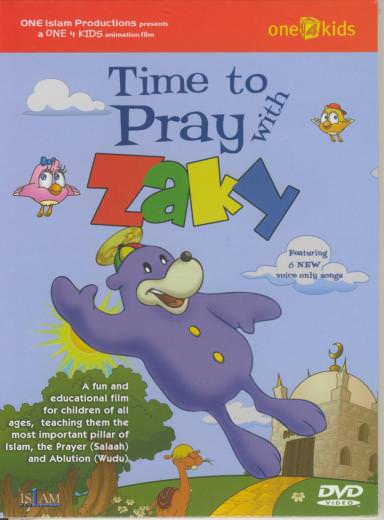 I have two little boys (and a third one on the way) and I am always worried about what they watch on television. I do not stop my children from watching television completely as I feel that has negative results, but I have provided a controlled environment in which they only watch DVDs and programs which I have approved. Although, I let them watch a few animated movies, especially those by Pixar, I am always on the look out for quality Islamic shows for my children to watch and enjoy.

When I was a child, there was barely any Islamic media available for kids. I grew up listening to Zain Bhikha and Dawud Wharnsby’s nasheeds but that was all I had. Alhamdulillah, all that has changed as more Muslims have realized the importance of Islamic media and in the past few years, many products for children have been produced.

Thus I have compiled a list of my favorite Islamic entertainment products for children to share with other parents who have similar concerns. People may differ over the permissibility of these products (music, animation, etc) but this is not the forum for that. Please click here for a fatwa on this issue on music in television shows, and here for a fatwa about animation for children.

This is a one hour animated movie about the early wars between the Muslims and the Mongols. It focuses on the story of Saifudeen Khutuz (pronounced Khotos in the movie) from childhood until he leads the Muslims to their first victory over the Mongols. The problem with this movie is that the animation is a bit outdated and the voices are not in sync with the lips of the characters. However, what I really enjoy about this movie is that it gives you a chance to teach and discuss many important aspects of Islamic history with your children. One of the scenes in this movie is the sacking of Baghdad which is a very important event in the history of Islamic scholarship. This movie opens the doors to discuss such historical events with your children.

Children love animals and nature (at least my kids do), and as such I feel much more at ease letting them watch Harun Yahya’s nature documentaries rather than those of Non-Muslims. Now the Non-Muslim produced animal documentaries are good but the advantage of the Harun Yahya DVDs is that he always links everything back to Allah and Islam. It is a beautiful way for children to learn about Islam and nature at the same time.

This is a controversial area as there are so many different opinions regarding what is permissible or not in terms of nasheeds. Going with the majority view that wind and string instruments are prohibited, as is acting like you are in a rock video, there are still many Islamic nasheed videos you can let your children watch. I have a collection of nasheed videos by various artists like Zain Bhikha, Ahmed Bukhatir and Native Deen which I let my children watch as well a collection of nasheed performances on stage (call it a concert or whatever you like) without instruments (except a drum sometimes) or screaming girls in the crowd (I don’t approve of that).

My children’s first word was Allah which they repeated after hearing it in almost every nasheed, one of their first sentences was Laa Ilaaha Illallah which they learned from the song “Al-Khaliq” and the list of good things they have learned from these songs can go on and on. Thus far, I have seen only good results from raising my children with nasheeds, but that is a decision for parents to make based on the opinion they follow about nasheeds and music.

7. Stories of the Prophets – Yusuf Estes

PEACE TV has produced some of the best Islamic shows for children. The first one to make this list is Stories of the Prophets. Yusuf Estes is perfect as an Islamic teacher for children, looking like a jolly grandfather and with a very good sense of humor, he keeps the children entertained while teaching them the stories of the prophets (peace be upon them) and many valuable lessons from each story. This is a very important show to let your children watch and one of many reasons why I recommend PEACE TV for every Muslim home.

Other entertaining shows on PEACE TV are Whiz Kids and Wonder Kids, both feature performances by the children of the IIS (International Islamic School) in which the children deliver lectures, sing nasheeds, act out plays and overall provide good entertainment and lessons for children. I really like these shows because they provide positive role models for Muslim children, as your children can grow up watching practicing Muslim children on television.

Young people and teenagers are entertained and learn a lot through Baba Ali’s Reminder series, but for the little ones, there is Hooray for Baba Ali. A series of short videos in which Baba Ali entertains the kiddies by behaving like a child (more like a Muslim version of Mr. Bean) while teaching them many important lessons including obedience to parents, cleanliness, kindness to animals and so much more. The DVD of this series released by Milo Productions Inc. has some bonus nasheed videos which the children really love.

One of my favorite stories of all time, narrated in Saheeh Muslim and the Tafseer of Surah Buruj, the story of the boy and the king is full of great moral lessons. That is why this is one of my favorite Islamic movies ever. At a full feature length of one and a half hours, this movie tells the story of the boy who stood up against the king and his sorcerer and all the adventures that ensued. The movie’s animation is a bit outdated but it does not matter much because that is made up for with quality voice acting, a well written script and many morals and lessons for the entire family. This movie I recommend the entire family to watch together, not just for the kids.

It is hard to choose between the Message, the Final Legacy (series on Islam Channel) or the animated movie Muhammad: The Final Prophet. All three tell the Seerah beautifully, but since this is a list for children, I will go with the animated movie as the best way to teach your children the basic Seerah. The movie is well-animated, has good voice acting, an excellent script and tells all the major events of the Seerah with many moral lessons in just one and a half hours. I find this movie perfect as an introduction to the Seerah for children, Non-Muslims and new converts.

1Islam Productions child division One4Kids have hired quality animators to put together a series of DVDs with an Islamic ethos about a purple bear named Zaky. There is so much to praise about this series. The animation is of the highest quality, the knowledge passed on is approved by scholars and authentic, there are no musical instruments and it is very well scripted. The best DVD in this series thus far is Time to Pray with Zaky which teaches children how to perform Wudhu, Tayyamum and Salah as well as many other lessons along the way. This DVD taught my children how to pray before they were two years old and at the moment they are learning their duas and surahs from this movie. If you don’t have this DVD in your collection, get it now. At the moment, we are eagerly awaiting the DVD release of the next Zaky movie in which he deals with protecting the environment.

1. Enjoying Islam with Zain and Dawud

Another PEACE TV production, this is a very high quality TV show, which I love watching with my children. This show stars Zain Bhikha, Dawud Wharnsby and five wonderful Muslim children in a library in which they discussed many important Islamic topics using many creative means and of course many nasheeds (with no instruments except the duff). The show has a catchy theme song which gets my children excited and glued to the TV, it has a brightly colored set, brilliant actors and in every episode your children will learn many valuable Islamic lessons. Yet another reason to have PEACE TV in your home.

The Challenge of Anger among Young Muslims in America