“And abide quietly in your homes, and do not flaunt your charms as they used to flaunt them in the old days of pagan ignorance; and be constant in prayer, and render the purifying dues, and pay heed unto Allah and His Messenger: for Allah only wants to remove from you all that might be loathsome, O you members of the [Prophet’s] household, and to purify you to utmost purity.” [33:33]

The word قَرْنَ stems from the root letters وق ر or, according to other scholars, the root letters ق ر ر, both implying more or less the same implicit meaning. According to Lane’s online Arabic-to-English lexicon, the root of the word قَرْنَ means –> to settle; be firm, steady, fixed, settled or established; be motionless, quiet, still, standing, stationary; to rest, remain, continue or reside in a place. Synonyms are ثَبَتَ and سَكَنَ which, when used for a man, also imply to reside or rest somewhere ‘with authority or power’.

According to Tafsir ibn Kathir, “And stay in your houses” means “stay in your houses and do not come out except for a purpose. One of the purposes mentioned in Shari`ah is prayer in the Masjid, so long as the conditions are fulfilled, as the Messenger of Allah [صَلى اللهُ عَليهِ وَ سَلم] said:

– “Do not prevent the female servants of Allah from the masjids of Allah, but have them go out without wearing fragrance“.  According to another report:

“…even though their houses are better for them” [Abu Dawood: 567]” [End quote tafsir.com]

Tafsir Maududi expounds, “The word قَرْنَ in the original is derived from قرار according to some lexicographers and from وقار according to others. In the first sense, it will mean: “Settle down, stick firmly;” and in the second sense: “Live peacefully, sit with dignity”. In both the cases the verse means to impress that the woman’s real sphere of activity is her home; she should carry out her functions within that sphere peacefully, and she should come out of the house only in case of a genuine need.

This explanation makes it abundantly clear that what Allah forbids for women is to move out of their houses showing off their physical charms and beauty. He instructs them to stay in their houses because their real sphere of activity is their home and not the world outside. However, if they have to move out of the house for an outdoor duty, they should not move out as the women used to do in the pre-Islamic days of ignorance. For it does not behoove the women of a Muslim society to walk out fully embellished; to make their face and figure conspicuous by adornments and tight-fitting or transparent dresses, and to walk coquettishly.”

We need to keep in mind the context of the revelation of these verses of the Quran. The wives of the Prophet [صَلى اللهُ عَليهِ وَ سَلم] were being specifically addressed. Just before this verse, they were commanded not to soften their speech when conversing with non-mahrum men due to necessity. After being told to stay in their homes, they were commanded not to do تَبَرُّج (wanton display of charms and beauty). 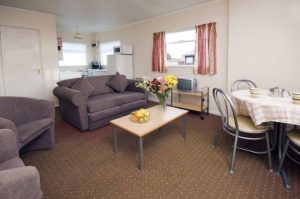 Muslim women emulate the wives of the Prophet [صَلى اللهُ عَليهِ وَ سَلم], considering them role models. Any Quranic command addressed towards the latter, particularly one that aims to establish lofty moral character and conduct, automatically becomes a praiseworthy goal for the average Muslim woman, for all time to come. Therefore, the necessary traits of moral behavior of exemplary Muslim women, whom other women of the ummah would always look up to, viz. the Prophet’s wives, are being outlined here.

The question arises as to why the wives of the Prophet [صَلى اللهُ عَليهِ وَ سَلم], as the epitomes for all Muslim women, were commanded to mostly stay in their homes? Also, what falls under “genuine need” that allows a woman to emerge from her home in full hijab?

The purpose of this command is not the confinement of women to their homes out of a disdain for their intelligence or productivity as individuals. Neither does Islam consider a woman solely responsible for the moral vices that emerge in a society. If that were the case, men would not have been commanded to lower their gaze and guard their chastity [Reference: Quran, 24:30].

As the word meaning of قَرْنَ implies, a Muslim woman should keep her home as the focus of her attention and activities, and make it the base of her affairs. A cursory glance at women all over the world shows that, no matter how hard they work outside the home (whether in plantation fields, picking up the children from school, or for other pursuits), eventually they always return home. When they do, they have to run its affairs too, such as the sometimes mundane tasks of cooking and cleaning. Even if they choose to delegate these internal home affairs to employees or paid helpers, the task of supervision, planning and follow-up still remains their primary responsibility. Whether it is a rural lass in the valley of Chitral or a housewife in suburban California, matters such as what the family will eat for the day and when the clothes will be washed, are up to the women of the house to decide and execute.

Here are a list of necessities that allow Muslim women to leave their homes:

It becomes clear, then, that far from being confined to their homes twiddling their thumbs, Muslim women will need to emerge very often in order to fulfill the obligations of Islam – such as seeking and imparting knowledge – and to perform social and moral duties in their society. It is for this purpose that hijab has been ordained and they have been warned in the same verse not to do tabarruj as in the days of the first ignorance/jahiliyyah (implying that the same jahiliyyah would re-emerge in the future, which has unfortunately happened).

No matter what their religion, culture or ethnicity, women today who choose to pursue full-time, demanding careers almost always face a crossroads in their professional lives when they hear their biological clock ticking loudly during their thirties, especially if they have consciously chosen career over marriage and motherhood. Even after having babies, those women who choose to work, admit to living with a constant guilt; a nagging feeling of having let down their family, or not being there for their children when they need them (which is several times a day). And even those women who have achieved accolades and won awards for their accomplishments in their professional lives, admit to feeling a sense of desolation when, at the end of the day, they come home to a lavish but empty apartment/villa and have dinner alone.

In contrast, those women who keep their home their priority, or shall we say, their “primary occupation”, but continue to dabble in their professions and hobbies on a part-time or freelance basis – viz. at a level that doesn’t obstruct fulfillment of their responsibilities at home – lead a more satisfied life, entering into a win-win bargain. Their homes and families are taken care of, fulfilling their maternal and nurturing instincts, whereas their mental and intellectual faculties also remain stimulated because their spare time is used constructively for the benefit of others in society.

Spending on Family: Charity or Expense? Depends on your Intention!

Memorizing the Book of Allah: Interview with Ustadhah Kareema Czerepinski