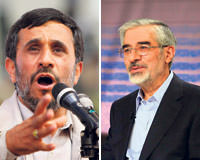 Being the only Iranian on the staff, I am somehow automatically qualified to write about my essentially non-existent knowledge of Iranian politics, wa Allahu al-Musta’an. Those of us who have been following the world news a bit might know that today, Iran is holding its presidential elections. Insha’Allah, I will just briefly share a few of my thoughts on the elections, and what they mean for the Ummah.

It seems there are four candidates running for election. Besides the incumbent, Mahmoud Ahmadinejad, also running, there is the reformist, Mir-Hossein Mousavi, the “hard-line” former commander of the Iranian Revolutionary Guard, Mohsen Rezaei, and another reformist (and cleric) Mehdi Karroubi.

From what I have been reading, it seems that the only two relevant candidates are Ahmadinejad and Mousavi (i.e. the others supposedly don’t stand a chance). As such, this will, alhamdulillah, allow me to write a very simplistic, black-and-white, fourth-grade-level analysis of the state of affairs, as I am now able to simply divide the sides into conservative versus reformist.

Ahmadinejad, the conservative, will most likely follow the same policies he held pre-election. Many Muslims here in the West seem to be quite fond of him, because, as we have seen, he is the only leader who has really had the guts to stand up to Israel and the West and speak frankly about issues concerning the Muslim world. However, I must remind everyone that with his belligerent behavior towards the Western powers also comes his belligerent behavior towards our Sunni brethren in Iraq via the funding of Shi’ah death squads. So please, brothers and sisters, do not view Mr. Ahmadinejad as the knight of the Muslim world. He has his own ideology, which is very different from our own, though it may intersect in some areas, and he is doing what he can to push it forward.

As for the “reformist” side, represented by Mousavi, we must understand what is usually meant by reform, when used in the context of Iranian politics. Usually it refers to reforming the laws that are used to enforce their version of the shari’ah. While there are stark differences between the meaning of shari’ah between Ahl usSunnah and the Shi’ah, by and large, the laws applying to society are very similar, if not the same in some cases. So, while we do not agree with their version of the shari’ah, we certainly do not want to find ourselves supporting the secularization of Iran. Reform, also implies a softer, more cooperative foreign policy. In other words, by this ideology, Iran would no longer be viewed as the only ‘Muslim’ nation with some manhood. At the same time, however, this might (or might not) mean less support for Shi’ah militias in Iraq.

As for the Iranian Sunnis, it seems that their oppression was increased under Ahmadinejad’s rule (from his predecessor, Khatami). In general, it seems that the perception is that the Sunnis (or any religious minority) will be less oppressed under a reformist president. As it stands, the Sunni adhan is banned in Iran, in much of Iran, Sunni Friday prayers are only available at the embassies of Sunni countries, and anyone who outspokenly calls to Ahl usSunnah is usually arrested and/or killed. I honestly don’t expect any of this to change no matter who is elected. According to a much more rigorous analysis of the situation on IslamOnline.net, it seems that, by-and-large, Iranian Sunnis prefer a reform candidate (as it would hopefully mean somewhat less oppression for them).

However, and Allah ta’ala knows best, it seems that neither side will benefit the Ummah much by their policies. Perhaps the most important issue to note is that the final decision making power in Iran doesn’t lie with the president, nor in any of the branches of elected government, but with the Supreme Leader (currently Ali Khamenei), who, much like the pope, occupies his position until death. Pardon my skepticism, but due to this, I really don’t expect that Iranian elections can really have much of an effect on anything at all.

Of course, as Muslims, we don’t pin our hopes on any individual or group, but only on Allah subhanahu wa ta’ala, who is over all things powerful. May Allah alleviate the oppression of our brothers and sisters in Iran and everywhere, and may He recompense the oppressors with what they deserve. Truly He is al-Hasib (the Reckoner), al-Muntaqim (the Avenger), and Ahkam al-Hakimin (the Most Just of Judges)!