[by abu abdAllah at TDC.  For the next few months, I am taking a break from writing here at MM.  I have to focus on preparing for the Texas Bar Exam.  Jazak Allah khayr for your time and your duas.]

You know, a lot of times a blog entry starts with what seems like a good intention.  The Muslim blogger, alhamdolillah, is armed by Allah with a powerful mechanism to prevent his seemingly-good-intentions from ramming his foot in his mouth while throwing his elbows in a hard foul.

I’m talking about the benefits of seeking refuge with Alllah not only against shaytan, but against the evil that might be ready to erupt from the least-kind part of a person’s heart, and against the sinfulness of words and actions WHILE they can still be taken back.

One of the benefits: you are not reading the post I intended to write after attending a TDC debate on how Muslims should educate their children.

I actually feel physically different now than I did when I started typing, and so again, innalhamdolillah.  I feel better!  As I sought refuge from Allah, I found myself wondering how much evil my words could do.  And I was remorseful.  Not just of what I had been about to write, but of my earlier enthusiasm during the debate, enthusiasm which may have in, however small or terrible a fashion, have contributed to reducing decorum, civility, and mutual respect in that room.

I pray that that decorum was restored after I left. I am grateful to Allah that my Ansaar duties required me to leave early.  And I ask forgiveness from Allah, the speakers, and the other people in the room, if anything I said spurred any rancor.

Alhamdolillah alaa kulli haal.  There is one thing that the debate taught me.

Shaykh Waleed, mashaAllah, asked us last night to take on a great challenge: take the lead in the evolution of this convention or lose it altogether.  (quick aside: No, TDC is not dead, but either it will submit to metamorphosis, or it may pass from the earth as assuredly as if we had witnessed the death of a great scholar from the lack of willing blood donors.) 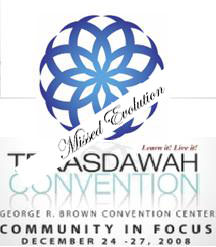 Ya jam’aa!  TDC, indeed it must evolve.  Or, put differently, TDC itself must climb the mountain pass.  TDC began with striving to do good in a way that was a challenge to all Muslims everywhere, and mashaAllah, it is beloved for the good it has done.

Here is the next evolutionary step that i suggest after witnessing the debate on education: as much as humanly possible, all the top non-shuyukh TDC leadership positions must be filled by women, qualified women whose voices have been, for whatever reason, relegated to the audiences.  But also, women whose perspective on what constitutes a worthwhile program and who should be on the podium
appears all but ignored.

How to take that step? Blindly? Foolishly? no.

Here’s just one way to proceed:
1) Because every TDC begins in January, with the work of the program committee, have the current committee begin the work so that the new evolution can still keep its December calendar position.
2) Simultaneously begins the work of a search committee for the most qualified women.  Academic, professional, social service, theological, and other backgrounds could all be relevant.
3) By March, inshaAlllah, have the newly constituted committee take the reins, with the old committee members as mentors/institutional-knowledge-base.
4) The shuyukh base and its (chiefly Shaykh Waleed’s, mashaAllah) role will not be changed — veto of anything that attempts to undermine the Qur’an and Sunnah.  But also providing guidance, enthusiasm, and much more, mashaAllah.
5) Since the bulk of non-program committee work might easily begin after March, have those committees and job functions begin with women governance, again, with mentoring available from previous personnel.

I’m not talking about two TDCs, one for men, one for women.  Nor a TDC with no male volunteers.  I am talking about something no major Muslim convention has yet offered the whole ummah.  The wisdom and vision of our women.

What are some ways in which such a change could have changed the TDC which has just ended?

First, only Allah Knows for certain.  Second, asking a man what women would do if given the chance might be counterproductive, eh?  But giving your question the benefit of the doubt, maybe, wAllaho’Alim, this TDC about community would have had at least one full session about domestic violence, children swept up in the foster care system, or the need to address an increasing number of aging Muslims who lack a family support structure and need at least assistance and companionship as they wait for the promise of Allah.

All three of those are addressed eloquently and cogently by the Qur’an and Sunnah.  And Muslims need reminders and solutions to address these matters.

And all three of them happen to be, alhamdolillah, the concerns of Niswa, a Southern California social service organization, founded by women, and whose board members have all been women.  MashaAllah, that’s a group of women who could even teach TDC about community service.

And women like them should get exactly that chance.