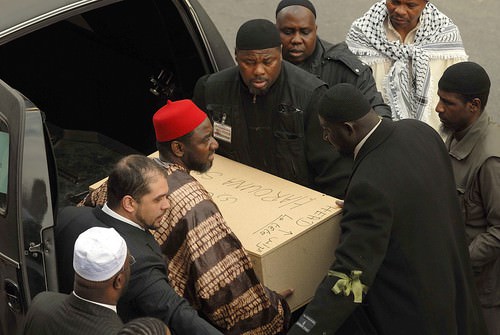 Further to the previous post on this subject, Sister ‘Medina’ forwarded us an emotional eye-witness account and pictures, jazakumAllahkhair…

It is amazing how tragic events can become a source of coming together for Muslims… not only with Muslims, but also with non-Muslims. Someone mentioned that there has not been one negative angle to this tragic Muslim story in any of the papers. Perhaps it will reaffirm to the common American that Muslims are only human, as human as anyone else.

UPDATE: Seems we spoke too soon. The arrogant bigot, Bill O’Reilly, and his equally slimy side-kick Malkin, did have to add their inhumane 2-cents about illegal immigration and overcrowding (here and here). Leave it to Bill to make hay out of the death of babies! Here’s a tribute to King Bill, nicely done by Abu Ameerah.

The account and a forward are being posted unedited.

One of my very mature teenage friends wrote this. She and I went today. After reading whats below…….

For the first time today, I cried behind this………….I got lost in those photos, the beat of my heart increased and tears began to run from my misty eyes…………….Subhann’Allah ta’ala.

I am sitting here in AWE. I haven’t been able to escape the view of a scene that will forever be…………………..MY UNFORGETTABLE.

I make du’aa and if only we can come together in unity like today, EVERYDAY and not in times of pain and tragedy, Insha’Allah, we would be a reflection of the Messenger of Allah Tabaraka wa ta’ala and his companions (May Allah be pleased with all of them). To see the warmth of Muslim faces and Islam superseding the pride of every nation, this is truly a beautiful thing, Allah Musta’an, Allah Musta’an, Ameen.

May the peace and blessings of Allah be upon the Rasul(saw) and his family.

Alhamdulilah, today I was able to attend the Janaza of the 10 that died in the bronx fire. Sr. Meccka and I were attempting to get there at 12:30 because we heard the women’s section of the masjid was small. I dunno what we were thinking but we anticipated about 50 people would be there, maybe. We got off the train and starting walking to 166th st. We dodged through small mobs of brothers and sisters, we were walking fast. We turned the corner, that was 166th.

“SubhanAllah!” is what I heard Sr. Meccka say, as she froze, she was in front of me. I turned the corner and said “Allahu Akbar”, and shoke my head saying it over and over repeatedly…the whole street was flooded with Muslims, 2 blocks long! Honestly, I’ve never seen anyting like that in my life. There were so many people that no more brothers could fit in the front, and so about 200+ brothers has to pray behind the sisters…. This was THE JANAZA!

unanimous reply 10! Response motionless expression of shock, sympathy and grief coupled with pale facial expressions… This was THE JANAZA!

The Magassa’s five children Bilaly, 1, Diaba, 3, Aboubacar, 6, Mahamadou, 9, and Bandiougu, 11. Sadibe Soumare, 42, and four children — Hassimy, 7, Djibril, 4, and twin daughters Sisi and Harouma, 7 months all laid in woden caskets. Caskets so small that at least 4 of them could fit in the same funeral car. Baby twin girls in the same casket… This was THE JANAZA!

One of the scariest parts about it: THE JANAZA was NOT open to the public! We, the hundreds and hundres of strangers invited ourselves. Stood behind the police blockades, layed down sheets, tarps and our jackets, faced the qibla and prayed the janaza salah… This was THE JANAZA

InshaAllah I plan to write a poem about this moving event, and experience.

PLEASE MAKE DUA FOR THE FAMILIES!

All In The Family