Al Jazeera English correspondent Jamal Elshayyal reports from this year’s Hajj on a group of Rohingya Muslims making the pilgrimage. 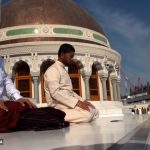 “The problem in Rakhine began in 1962 but it’s only now that the world has begun to take notice. There are plenty of stor
The pilgrim says he is praying for help at hajj:ies of suffering in Rakhine. Unfortunately, the suffering is due to the single fact that we are Muslims, and that’s why we are oppressed. There are someBuddhists who refuse to accept our differences or allow us to practice our religion.”“I pray that the Muslim countries and leaders will do more for the people of Rakhine, and they are able to pressure the president of Myanmar to put an end to the suffering of my people.”See full interview here:[youtube=http://www.youtube.com/watch?v=rf17W2L-HiE&feature=plcp]