Shaykh Yaser Birjas will be running a special series explaining each day of Hajj, so those of us who are not in Makkah can sync up with Hajj! 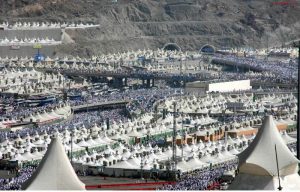 The official day of Hajj is the 8th day, known in Arabic as Yawm at-Tarwiyah or “the day of fetching water and quenching the thirst.”

Arafah is the main day of Hajj, in which the pilgrims spend a whole day from forenoon until sunset and then spend the night, between Arafah and Mina, on the plain of Muzdalifah. Back in the days before the establishment of the modern facilities in Arafah and Muzdalifah there was no source of water available on the actual plains of Arafah and Muzdalifah. As matter of fact, the plains there are until this day wide open valleys, dry and barren except for few shrubs and desert trees.

Because of the scarcity of water in the area, the pilgrims were instructed to get ready for this long day and night by feeding their animals and making sure their camels had enough water for the long journey ahead. The pilgrims would also fetch water for themselves and fill their containers and waterskin bags. It is for this reason the day was given the name Yawm at-Tarwiyah or “the day of fetching water and quenching thirst.”

Yawm at-Tarwiyah is the official day of commencing the actual rituals of Hajj. Those who have already arrived to Makkah prior to this day most likely had performed the Tamattu’ form of Hajj in which they offer Umrah upon their arrival to the Holy Sites and come out of the state of Ihram back to the civilian clothes. They would live in their hotels in Makkah or wherever their camps might be until the official start of Hajj. Now that Yawm at-Tarwiyah has arrived the pilgrims are now required to get back into the state of Ihram and start their sacred journey.

What do the pilgrims do on the 8th day of Hajj?

1. Regardless of their location, whether they are in a hotel, already in Mina or at home in Makkah, the Hujjaj or pilgrims prepare themselves to enter the state of Ihram.

2. The pilgrims will prepare themselves with the proper hygiene, such as clipping their fingernails, trimming their mustaches, shaving the underarms and pubic areas and take a thorough shower. They then wear perfume and put on their two white garments, in the case of men, and their regular clothes for women.

3. Once they are ready to start their move to Mina, they pronounce their words of Ihram “Lab-bayka Allahuma Hajj” which symbolizes the purpose of this journey “in Your service, O my Lord.”

4. Now that the pilgrims have entered their sacred journey, they will not be able to get out of it, except in emergency cases, until they return back from Arafah. That means they stay in Ihram for almost two days, and in some cases, even a bit more.

5. The pilgrims then move in bus convoys, cabs and even on foot to the tent city camp of Mina.

6. Some pilgrims take advantage of the return back into the state of Ihram and go to the Haram or the Sacred Masjid first, do tawaf around the Ka’ba and then head to Mina.

7. In Mina, the pilgrims remain there for the entire day and night until after Fajr (dawn prayer) the next day.

8. During their stay, which is not obligatory to begin with, the Hujjaj pray Dhuhr, Asr, Maghrib, Isha and Fajr prayers in their respective times in the form of Qasr (shortening the four units into two) but without combining any prayer with another.

9. There are no specific rituals to complete during this day except for the general requirement to engage in a constant state of worship and praise, particularly the words of Talbiya “Lab-bayka Allahuma Lab-bayk…” or” In Your service, O my Lord.” Remember, this day was initially for taking the proper preparation for the following day.

10. Even though water and other food supplies can easily be found today and already exist in the modern facilities in Arafah and Mina, the Hujjaj are still required to spend the day and night in Mina.

11. Although acts of worship are definitely recommended on that day, qiyamul-layl or night prayers might not be the best thing to do the night before Arafah. The pilgrims need to preserve their full energy for the most important day of Hajj, Arafah.