We’ve seen far too many sad days recently. Just yesterday, a synagogue and free-speech event in Denmark was attacked, claiming one life and leaving several wounded. Last week, three Muslim college students were killed execution style in Chapel Hill. A smiling picture of Yusor Abu-Salha, Deah Shaddy Barakat, and Razan Abu-Salha tears at my heart as I read about their murder. Their families are heartbroken, their communities are angry, and trying to cope with the tragic loss of life. [Inna lilahi wa inna ilay hi rajioon]

A few days earlier, another shocking incident hit the papers. Humanitarian worker, Kayla Mueller was killed after ISIS took her hostage in Syria. I cried on that day for Kayla, staring at her smiling picture positioned above a heartbreaking letter she wrote while in captivity. Her death was a loss for humanity. She was a peaceful servant, doing her civic duty in her own generous way. But was her sacrifice in vain? I think not. 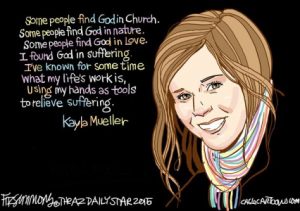 Last year, I watched a panel discussion from the Heritage Foundation about the attacks on the US Embassy in Benghazi. Author Bridgett Gabriel sat on the stage. I knew of her as an anti-Muslim author, and had seen her in segments defaming Islam and Muslims on Fox News. During the panel discussion, a young Muslim law student stood up, and called the panel’s attention to how Muslims are portrayed badly in the media. She then asked the panel, “How can we fight an ideological war with weapons?” attempting to reiterate her statement by claiming that the fight against extremism is ideological.

Gabriel pounced on the opportunity immediately, claiming that the “peaceful majority” of Muslims who were not radicalized were irrelevant compared to the violent minority of Muslims. She went on to refer to Nazi Germany and Russia as examples of nations whose peaceful majorities could not stop extremism.

I sat and listened to Gabriel’s voice. Her anger and rage reverberated into the audience, rousing up a round of applause of support for her comment. The Muslim student who asked the question stood timidly listening to Gabriel’s statements. I shook my head, amazed at the crowd, and disagreeing with Gabriel’s opinion.

The peaceful majority is emphatically not irrelevant. The three Muslims students of Chapel Hill, NC are a testimony to that fact. They were known to be active in their community, serving the poor at food drives and offering free dental services to low income citizens in their neighborhood. Barakat had raised money to buy dental products for Syrian refugees in Turkey. Their reputation for being outstanding citizens was well known. 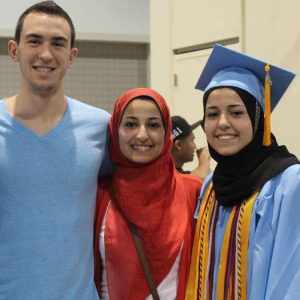 Kayla Mueller, the humanitarian worker who was killed by ISIS, was not irrelevant. Her tireless and selfless service to humanity benefited so many refugees before she died. She was determined to make a difference in the world, and her generosity will not be forgotten. 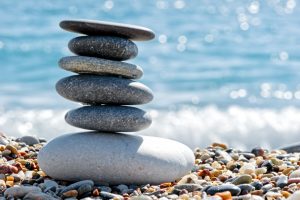 In our own American backyard, the “peaceful majority” has proven triumphant in overcoming women’s suffrage and racial discrimination among countless other human rights battles. Where would we be without the efforts of Frederick Douglass, Susan B. Anthony and Rev. Martin Luther King? Imagine the state of the word without Mother Teresa, Gandhi, and Dietrich Bonhoeffer, whose persistent lifelong efforts toward peace eventually helped to break through the walls of oppression.

The peaceful majority is the most relevant factor in this fight against terrorism. Pundits, who incite bigotry like Gabriel, don’t help the situation. Gabriel’s angry rhetoric only adds to the problem we are facing, and contributes to making people hate each other even more.

In a review of her 2010 book, Why They Hate Us, Publisher’s Weekly describes it as such: ““Gabriel’s strict dichotomy between “evil versus goodness” is too extreme to be informative. Readers will be forced to decide whether or not to accept her heart-felt bias.”” While the world waits to see if the Chapel Hill murderer Craig Stephen Hicks was motivated by anti-Muslim hate, I’m worried that others who read books like Gabriel’s will be violently radicalized. I’m sure you’ll remember Anders Behring Breivik, the Norway terrorist who slaughtered 77 people in 2011. In his manifesto, he quoted the writings of Bridget Gabriel’s peers, Pamela Geller and Robert Spencer, as he detailed his evil motivations. Recently, a well-documented rise in anti-Muslim sentiment has been blamed on the new movie American Sniper, which sparked a barrage of threatening tweets about the idea of killing Muslims.

The peace process doesn’t happen overnight, but I believe and history shows that the peaceful majority will eventually be triumph over the violent few. Those who belong to the peaceful majority are already working for this cause, and I with them, will continue on despite the hardships and opposition we face.  I am not irrelevant, nor will I allow myself to believe that my civic service is in vain. I know I’m making a difference, and though the immediate outcome is small, the overall impact of each individual is what really moves the needle.

Alana Raybon, a Tennessee educator, is an author with her mother of “Undivided: A Muslim Daughter, Her Christian Mother, Their Path to Peace.”

If you’re in the Peaceful Majority, what are you doing to move the needle for peace? Is it working?