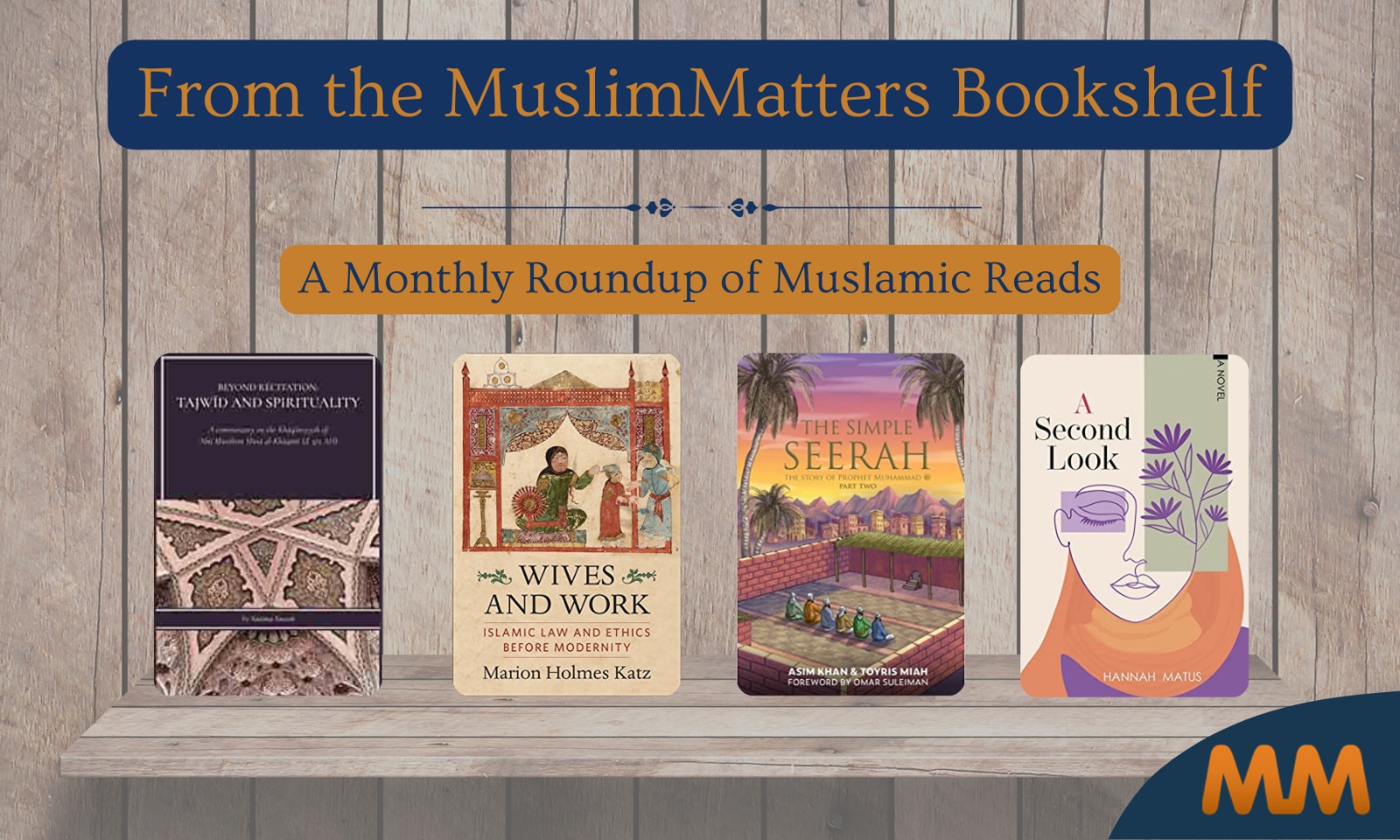 From the MuslimMatters Bookshelf is a monthly column from MM staff members on their latest reads – the good, the bad, the intriguing, and the Islamic.

This month, Zainab bint Younus shares her reviews of four different books. Our December picks are: Beyond Recitation: Tajweed and Spirituality by Shaykha Saaima Yacoob; Wives and Work: Islamic Law and Ethics Before Modernity by Marion Katz; The Simple Seerah: Volume 2 by Ustadh Asim Khan and Toyris Miah; and A Second Look: A Pride and Prejudice Retelling by Hannah Matus. 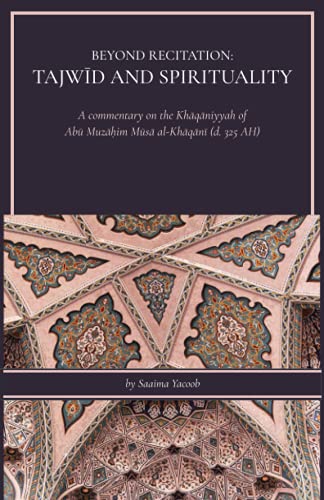 Shaykha Saaima Yacoob is a scholar of tajweed and the founder of “Tajweed with Love”: a website dedicated to inspiring love of tajweed. She is also the author of multiple books of tajweed and Qur’anic sciences in English – and when I spotted this particular title, I knew I had to get it!

“Beyond Recitation: Tajweed and Spirituality – a commentary on the Khaqaniyyah of Abu Muzahim Musa al-Khaqani” is a wonderful, accessible explanation of a classical matn (poetic text) that introduces the audience to the basic fundamental rules of tajweed. More importantly, it begins with a reminder of the deeper spiritual reasons behind studying tajweed – which can often be lost in the thick and thin (get it?! Tajweed pun!) of makhaarij, sifa, and more.

I highly recommend this book to anyone who has begun learning tajweed (and may or may not be having repeated breakdowns and questioning why they are doing this). It is a powerful reminder of the spirituality behind the technical science of tajweed.

“Wives and Work: Islamic Law and Ethics Before Modernity” by Marion Katz is an academic overview of early Islamic scholars and how they conceptualized wives, domestic, labor, and financial remuneration for that labor. 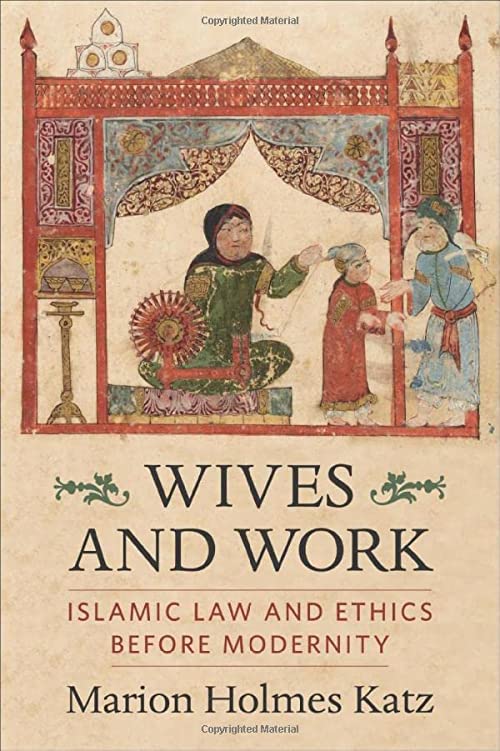 Katz covers a lot during the book: she looks at each madh’hab, their legal conceptions of the marital contract, and the implications regarding women’s rights to financial compensation, and how each school shifted over time (during the pre-modern period. She doesn’t discuss Ottoman era onwards). She also takes the time to look at the dramatic change of legal and ethical thought re. marriage by Ibn Taymiyyah and Ibn Qudaama, which impacts Muslim discourse even today.

I found Katz to be refreshingly objective in her book, thoughtfully considering different angles rather than falling back on shallow claims of “misogyny!” at every little thing (even the things we would find somewhat distasteful in our time/ cultural understanding).

She also analyzes surrounding influences on these discourses, most notably the influence of Greek philosophy on Islamic ideas of marital ethics. Katz brings up interesting observations regarding the issue of wifely domestic labor, such as the fact that there is no such thing as ijmaa’, that women are obligated to do domestic labor. In fact, the madhaahib started off with the opposite opinion before changing (for various reasons) a century or two later.

The Islamic legal discussions on marriage, marriage contracts, and marital ethics are fascinating and complex. It would be interesting to see scholars today discuss these issues in more detail and consider how to reconcile modern factors and understandings alongside the medieval socio-cultural norms and their impact on fiqh.

I would love to read a companion book by Muslim scholars (especially women!) on this same topic, but focused on the modern era and tracing the origins of certain themes in current Muslamic discourse. Overall, I thoroughly enjoyed this book! Keep in mind that it is an academic work by a non-Muslim author, so it would be interesting to see it reviewed by Islamic scholars for accuracy. “The Simple Seerah: Volume 2” is the second book by Ustadh Asim Khan and Toyris Mian that presents the life of RasulAllah

to a middle grade audience in a vivid storytelling style.

The version I got appears to be a potentially unedited print, likely the result of some technical mixup. There were a number of spelling and grammatical issues; and when I reached out to Ustadh Asim, he confirmed that inshaAllah future prints will feature the corrected version!

Volume 2 opens with the Hijrah of RasulAllah

from Makkah to Madinah, and covers the battles of Badr and Uhud. Weaving in other notable anecdotes based on ahadith, such as the story of Zuhair, the marriage of Fatimah

, and the political machinations of Abdullah ibn Ubayy; this book seeks to bring the Seerah to colorful life. This volume also includes a few illustrations throughout, though none of them explicitly identify or feature RasulAllah

Like the first volume, this book is also a valuable resource for home collections as well as Islamic libraries.

Muslim fans of Pride & Prejudice, rejoice! This gem of a novel, published by Tughra Publishers, is a delightful Libyan Muslim retelling of the Jane Austen classic (and is arguably much better than Ayesha At Last, another Muslim P&P retellings). 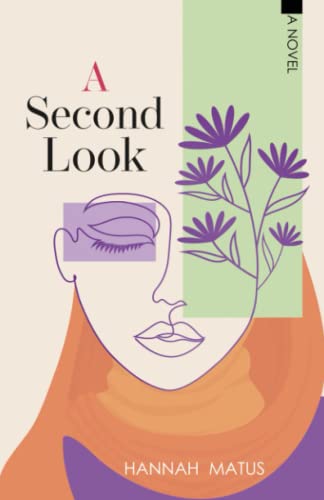 The best thing about this retelling is that it neither tries too hard to copy the original, or stray too far: instead, the author seamlessly weaves together Muslim social commentary, lessons on Islamic spirituality, hilarious witticisms, and a story that reads truly authentic #MuslimRepresentation. The Libyan element to this retelling makes it particularly unique, as few (if any) Muslim stories represent this particular demographic of the Ummah.

The only point of critique for this book is that it needs the tiniest bit of editing and character development – but that aside, the story itself is perfect!

Do you have any book recommendations or suggestions for our staff to pick up and review? Leave your comments below!

– From The MuslimMatters Bookshelf

– Navigating Muslim Representation In Books: The Good, The Flawed, And The Ugly