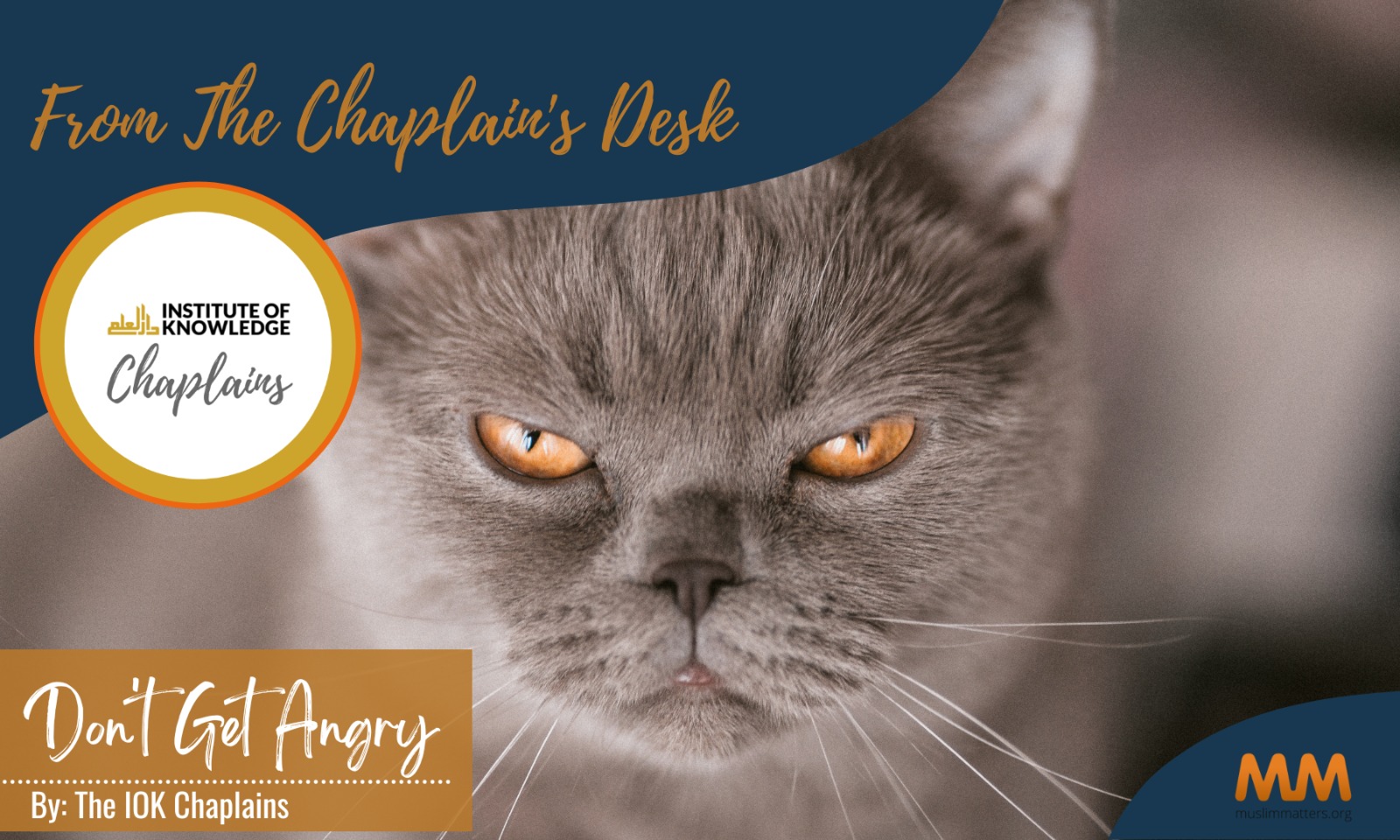 regarding some issues or complaints. Instead of addressing him with honor and respect, he was extremely rude and harsh. He started going off and accusing him saying, “You don’t rule with justice and you’re not giving us our rights!” Upon hearing this ʿUmar

became extremely angry and his face started to turn red. One of his advisors saw this and reminded him that Allah ﷻ says, “Be gracious, enjoin what is right, and turn away from those who act ignorantly.” This person is among the ignorant. (What is meant here is forgiving and excusing people’s failings of character and deeds and being gentle rather than harsh.) As soon as ʿUmar

heard this, his anger disappeared and he remarked, “You’re right. My anger was like a fire that you extinguished.” The narrator commented, “ʿUmar

would adhere strictly to the Quran.” I find it really hard to translate the Arabic expression. It is describing the fact that he would immediately implement whatever he heard of Allah’s

In a separate instance, one day Muʿāwiyyah

gave a sermon, and while he was speaking someone in the audience called him a liar. He descended from the pulpit in anger and entered his room and a short while later came out with water dripping from his beard. He climbed on the pulpit and said, “O people, truly anger is from Satan and Satan was made from fire. So if one of you becomes angry they should extinguish it with water.” Then he resumed his khutbah from where he left off.

Once a man cursed ibn ʿAbbās

and when he was finished he asked, “Does this person have any needs we can take care of?” Upon hearing that the man hung his head in embarrassment.

Once a slave was pouring water for ʿAlī ibn al-Husain

and the jug slipped from her hand causing his clothes to get wet. She saw that he had become extremely angry so she reminded him of Allah’s

loves those who do good.” He said, “Go, for you are free for the sake of Allah

I’m sure all of us here have experienced something similar to these incidents; someone may have said something to us or done something to us that caused our blood to boil. All of us are familiar with that feeling; our hearts start beating faster, blood starts rushing through our veins, our temperature rises, we feel this surge of energy flowing through our bodies and this emotion starts spilling over. Our faces start to turn red, our nostrils flare, that vein in our forehead starts popping out and we clench our fists. Sometimes it results in us raising our voices. Sometimes it results in cursing, or even worse, throwing something or hitting a wall. Anger is a natural human emotion. It’s something that every single one of us as human beings feels and experiences.

This is one of the narrations that is considered to be the foundation of manners, etiquette, and behavior in Islam. It is also one of the concise comprehensive statements of the Prophet ﷺ that may be few in words, but is extremely deep and profound in terms of meaning. The amount of evil and headaches this advice prevents, and the amount of good it brings is unimaginable. Oftentimes anger is the root cause of poor choices, regret, remorse, sorrow, and strained and broken relationships. Think about all the problems anger brings about in a person’s personal and social life; between brothers, siblings, parents and children, husbands and wives. If a person were to truly act upon this advice of the Prophet ﷺ it would lead to a wholesome, healthy, sound, and peaceful life.

In this narration a man comes to the Prophet ﷺ and asks for some advice saying, “Advise me.” This shows that the Companions of the Prophet ﷺ were constantly willing to learn from the Prophet ﷺ and seek advice and counsel from him in all of their affairs. Another version mentions that the man asked the Prophet ﷺ to advise him with something that was light and easy so that he could safeguard it and act upon it.

The Prophet ﷺ responded to his request by advising him to not get angry. He advised him with a few simple words, “Don’t get angry.” Don’t lose your temper and let your emotions get the best of you. Don’t get upset with people and say or do something that will be a source of regret later on. This is extremely succinct advice. However, the questioner did not realize how comprehensive and important this advice was. That is one of the reasons why he kept asking the Prophet ﷺ to advise him. Another narration mentions that later on he said, “I thought about what the Prophet ﷺ said and I came to the conclusion that anger gathers all the evils.”

1) Anger – Anger is a natural human emotion. It is something that every single human being feels and experiences. The Arabic word for anger is “ghaḍab”. Linguistically, anger is the opposite of contentment. It is derived from the root letters غ- ض- ب that indicate towards severity and strength.

Some scholars describe anger as “a flame of fire, lit from Allah’s

fire, that overtakes hearts. Whoever it overcomes has inclined toward the hereditary disposition of the devil, for indeed he was created from fire.”1al-Ghazālī, al-Arabaʿīn fī Uṣūl al-Dīn, p.133 The Prophet ﷺ said, “Truly anger is from Satan and Satan was truly created from fire.”2Abū Dāwūd, k. al-adab, b. Mā yuqāl ʿinda al-ghaḍab, 4784 It is an emotion that enters into one’s heart and can be both positive and negative. Other scholars have described it as a “movement of the soul as a result of revenge, or an internal quality that results in a movement of the soul to seek revenge.” Imām al-Ghazālī writes that it is when the heart’s blood boils out of a desire to seek revenge. Imām Mawlūd describes it as a “swelling ocean”. It is a swelling mass of emotion that is difficult to hold back once it is unleashed.

It is not necessarily a negative emotion in and of itself. Without anger there are many things that would not have been achieved. It can be a positive motivator. At the same time it can possess, consume, and ultimately destroy a person. In a state of anger a person is unable to see clearly; they don’t think of consequences. When a person becomes angry they lose control of their ability to think, speak, and act rationally. Oftentimes they will say or do things that they regret later on. How many people have ruined their lives because of something they said or did while in a fit of anger? How many people don’t have healthy relationships because they are known to be short-tempered? How many relationships has anger ruined and destroyed?

Anger is an emotion that needs to be trained, tamed, and kept in-check; it has to be controlled. It is an emotion that requires balance and moderation; a middle way. It is acceptable only at the right time, in the right place, for the right reasons, and with the right intensity. That is why scholars mention that there are two types of anger. One is for the sake of Allah

, and this is good anger, which can be channeled into positive actions. The other is bad anger, which is for the sake of ego and attributed to the devil. That is why the Sharīʿah encourages controlling one’s anger.

The Prophet ﷺ said, “The strong person is not one who overcomes you. A true strong person is one who is able to control himself when angry.”3Muslim, k. al-birr wa al-ṣilah wa al-ādāb, b. faḍl man yamliku nafsahu ʿinda al-ghaḍab wa bi ayyai shay yadhabu al-ghaḍab, 2609 Similarly, the Prophet ﷺ said, “Whoever swallows their anger while having the ability to act upon it, Allah will fill him with security and faith.”4Bukhārī, al-Tārīkh al-Kabīr, 6:123

2) Ways to Control Anger – The following is a list of some practical ways to control and break one’s anger:

– From The Chaplain’s Desk: Success – A Quranic Paradigm

From The Chaplain’s Desk: Success – A Quranic Paradigm