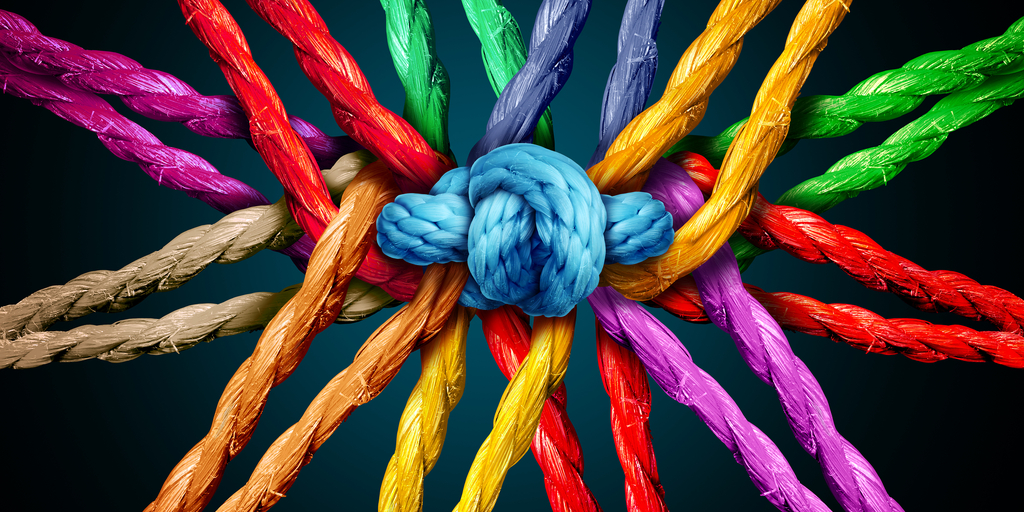 We have a common enemy. It has been our enemy since the creation of Prophet Adam

. The perpetrator of all violence, and deceptions emanates from this evil force. It is the excuse Allah

has granted for struggle and success. It is an arena for human kind wherein Allah

separates the monotheist from the rest; wherein He has offered the reward to those who believe and destruction to disbelief, polytheism, and hypocrisy. By description, Allah

gives context to the relationship of humans and Iblis with multiple ayah from Quran. He says:

O you who believe! Enter perfectly in Islam (by obeying all the rules and regulations of the Islamic religion) and follow not the footsteps of Shaitan (Satan). Verily! He is to you a plain enemy. (2:208).

“And Istafziz [literally means: befool them gradually] those whom you can among them with your voice (i.e. songs, music, and any other call for Allah’s disobedience), make assaults on them with your cavalry and your infantry, mutually share with them wealth and children (by tempting them to earn money by illegal ways usury, etc., or by committing illegal sexual intercourse, etc.), and make promises to them.” But Satan promises them nothing but deceit. (17: 64)

Then I will come to them from before them and behind them, from their right and from their left, and You will not find most of them as thankful ones (i.e. they will not be dutiful to You).” (7:17)

And he (Iblis, Satan) had no authority over them, except that We might test him, who believes in the Hereafter from him who is in doubt about it. And your Lord is a Hafiz over everything. (All­ Knower of everything i.e. He keeps record of each and every person as regards deeds, and then He will reward them accordingly).

The Quran is an eternal miracle, with its text as relevant today as it was 1440 years ago when it was revealed to our Beloved Prophet Muhammad

. It is a “guidance for certain”, which means it is the map to lead us toward success in this world and in the Hereafter. Then why do we separate it from our daily lives – moment to moment? Allah

provides fail-safes against forgetfulness, neglect, and laziness as He prescribes daily spiritual actions: salah, fasting, dhikr, da’wa, charity, instruction, so that we can remember our responsibility and duty to Him, and so we won’t forget our purpose (“Enter perfectly into Islam—submission). And when we remember Him, He remembers us …

Therefore, remember Me (by praying, glorifying, etc.). I will remember you, and be grateful to Me (for My countless favors on you) and never be ungrateful to Me. (2:152)

(The believers) who repent for their sins, worship God, praise Him, travel through the land (for pious purposes), kneel down and prostrate themselves in obedience to God, make others do good and prevent them from sins and abide by the laws of God, will receive a great reward. Let this be glad news for the believer. (9:112)

You [true believers in Islamic Monotheism, and real followers of Prophet Muhammad

and his Sunnah (legal ways, etc.)] are the best of peoples ever raised up for mankind; you enjoin Al-Ma’ruf (i.e. Islamic Monotheism and all that Islam has ordained) and forbid Al-Munkar (polytheism, disbelief and all that Islam has forbidden), and you believe in Allah. And had the people of the Scripture (Jews and Christians) believed, it would have been better for them; among them are some who have faith, but most of them are Al-Fasiqun (disobedient to Allah – and rebellious against Allah’s Command). (3:110)

And reminds us to

Let there arise out of you a group of people inviting to all that is good (Islam), enjoining Al-Ma’ruf (i.e. Islamic Monotheism and all that Islam orders one to do) and forbidding Al-Munkar (polytheism and disbelief and all that Islam has forbidden). And it is they who are the successful.

also enjoins collective responsibility. (Even within the individual actions of Muslims, there is a collective good. Consider the pillars of Islam.) Keeping the two points in mind: (1) the Quran is timeless; (2) Islam is an individual and a collective task. Now, join the two claims with a third: (3) the Prophet

was the final prophet – a universal messenger. The weight of these truths is on the Muslims (Believers), and to neglect this bounty, is to deny the covenant made between Allah

That covenant was sealed by the final Messenger, Prophet Muhammad

when he was given and embodied the Quran by exemplifying his Sunnah – the pillars and principles Islam.

in the ayah from Sura Taubah, listed the tasks of Believers: repent (taubah), pray (salah), praise (dhikr), travel (seek knowledge), thank (shukr); enjoin the good and forbid the evil (establish justice and economy). However, these actions, which depend upon guidance from the Quran and sustenance by the character of the Prophet

require solidarity, unity, and support from the Ummah; meaning, those who Believe and adhere to the commands of Allah

Without bonds followed by harmony, Muslims are unprotected and prey to the machinations and evils of Iblis (a oozu billahi minashaitan ir rajeem).

Islam is lived by jamaat, not by individualism. Allah

follows the ayah of Sura Taubah with the consequences of inaction:

If only there had been among the generations before you, persons having wisdom, prohibiting (others) from Al-Fasad (disbelief, polytheism, and all kinds of crimes and sins) in the earth, except a few of those whom We saved from among them. Those who did wrong pursued the enjoyment of good things of (this worldly) life, and were Mujrimun (criminals, disbelievers in Allah, polytheists, sinners, etc.). (11:116)

bears witness to these truths, when he is reported to have said:

After this, there are some observations that disclose the scattered condition of this ummah and the resulting disunity that impairs our ability to fulfill this dire obligation of “enjoining Ma’ruf and forbidding Munkar.

These conclusions are barriers to enjoining the good and forbidding the evil because the organizational missions become distractions, the conferences become bazaars, the speakers become celebrities, and the oppression becomes entertainment. The costs, the time, the subjects when not spent or aligned to act with a consciousness of the single Islamic mission is distraction. Furthermore, a time spent without redressing dehumanization, is money, hours, and agenda wasted. It is not to deny these separate issues need resolutions, and in the short term, Islamic organizations and nonprofits do fulfill that mission. However, Believers warrant a world view of Islam. The work is to recognize and remove the real cause of the oppression. This is the greater goal and the singular mission, since eradicating it will resolve all the crises that Islamic organizations address. The objective is to create a humane society where Islam is peace: violence, poverty, and oppression is relieved.

The emergence of Islamic organizations and nonprofits in the U.S. was at first to provide a single jamaat wherein all Muslims could converge and unify. Muslims found Islam from the Civil Rights Movement. While Muslims arrived from foreign countries, these newly converted Believers preceded the communities of immigrants, and they became political movements, or legitimate practitioners of Quran and Sunna (according to their understanding, their readings, and sporadic teaching). Others converged on college campuses as students, still other Muslims from foreign lands were invited to America. Certainly, the intent of the MSA and ISNA was to become an umbrella organization for all Muslims. Indeed, most Muslims found commonality with them. At the same time, those Islamic governances within the American grassroots communities, founded by “ex-slave” generations of convert Muslim men and women failed to garner support even though the development of these communities represented the authentic evolution of Islam necessitated for dawah in this country.

(1) Love for Islam, and  (2) a desire for Muslim unity. Although these distinguishing characters are separate by explanation, they are joined for action.

They loved one another because they internalized what Allah

And hold fast, all of you together, to the Rope of Allah (i.e. this Quran), and be not divided among yourselves, and remember Allah’s Favour on you, for you were enemies one to another but He joined your hearts together, so that, by His Grace, you became brethren (in Islamic Faith), and you were on the brink of a pit of Fire, and He saved you from it. Thus, Allah makes His Ayat (proofs, evidences, verses, lessons, signs, revelations, etc.,) clear to you, that you may be guided. (3:103)

The believers, men and women, are Auliya’ (helpers, supporters, friends, protectors) of one another, they enjoin (on the people) Al-Ma’ruf (i.e. Islamic Monotheism and all that Islam orders one to do), and forbid (people) from Al-Munkar (i.e. polytheism and disbelief of all kinds, and all that Islam has forbidden); they perform As-Salat (Iqamat-as-Salat) and give the Zakat, and obey Allah and His Messenger. Allah will have His Mercy on them. Surely Allah is All-Mighty, All-Wise. (9:71)

Hadith of the Prophet conveyed:

An-Nu’man ibn Basheer reported: The Messenger of Allah, peace and blessings be upon him, said:

The parable of the believers in their affection, mercy, and compassion for each other is that of a body. When any limb aches, the whole body reacts with sleeplessness and fever. Source: Sahih al-Bukhari 5665, Grade: Muttafaqun Alayhi

It portends a model of community.

In the U.S., the essence of Islam is rooted in unity. Indigenous brothers and sisters chose Islam as an answer to the fitna in America, especially in the urban areas. Collectively, we believe both the indigenous and the immigrant Muslims are situated in America to respond to the prayers of the oppressed around the globe. Efforts have been made, martyrs have been taken; organizations have been raised, yet neither have furthered a unified body to fulfill that mission.

Zaynab Abdullah is a slave of Allah

. An educator with 40+ years experience, she is currently teaches at Al Huda School. This mother of 10 and a grandmother of even more, is the founder and Director of Islamic Home School and Network, Incorporated (IHSAN Inc.), a satellite and umbrella program, which facilitated instruction for home educated and adult clients in the Detroit, Michigan. A seasoned community activist and program coordinator for community based centers including Youth Against Alcohol Tobacco and Other Drugs summer grant program in Detroit, Highland Park Community Center. She is a Public speaker, a MIST Coach and AP College Board Table Leader. She follows a legacy of generational human and civil rights activists.

Baby It’s Cold Outside: A Dua To Help You Make The Most of The Severely Cold Weather