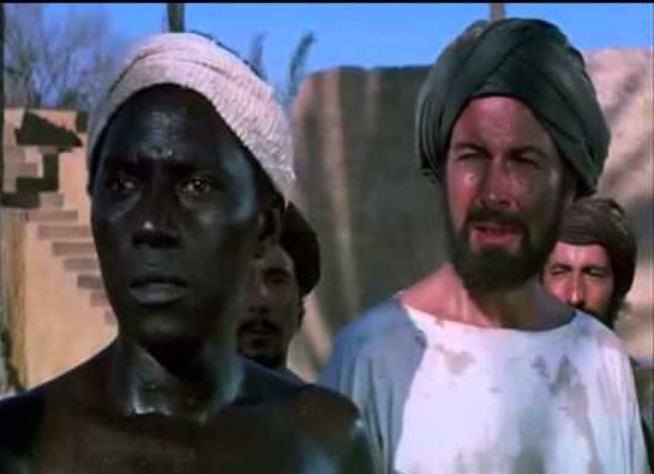 The Bilal Movie is actually a Sucka-Emcee Production: Bilāl ibn-Rabāh (May Allah be pleased with him) actually was Arab via his father Rabah, from Banī-Jumah, one of the families of Quraysh, making Bilal

The mere fact that Rabah is neither casted, mentioned, nor even referenced in the film, truly says a lot as per the agenda of the producers of this film: to do exactly what the Pagan Arabs did to Bilal, which was to deny him his Arabness and replace it with Blackness. I’ll speak more on this—the Reason why Blackness was imposed upon Bilal is because as a slave (prior to his liberation) he had zero-rights, not even the right to lay claim to his own paternal Arab genealogy. This, of course, was due to the fact that the Arabs possessed immense disdain for Abyssinia/Ancient-Ethiopia and its people, resulting from the generational military-conflicts between them, based upon religio-political and socio-economic dominance in the region, which of course was imposed upon Bilal, by virtue of him having an Abyssinian mother.

The political discord between the Arabs and Abyssinians occured as a result of the Abyssinians of Yemen, then a Colony of Abyssinia, wanting to divert commerce from al-Makkah to Yemen via making a church named al-Qullays, a Mock-Kabah, to draw Pilgrims to make al-Hajj/Pilgrimage in Yemen as opposed to al-Makkah. Once the Quraysh learned of this, a Man went to Yemen and desecrated this church, infuriating the People of Yemen, thereby inciting war…this became known as the War of the Elephant. After the War/Year of the Elephant, which an Abyssinian-Army with an Elephant-Cavalry failed to invade/conquer al-Makkah and were defeated (resulting from Allah casting upon them Flocks of Birds dropping Sijjīl/Firery-Stones [Noble-Qur’ān: Chpt.105; at-Tabarī; as-Suyūtī]), in retaliation, the Arabs of al-Makkah: the Quraysh and their many Allies in turn invaded Yemen. When this happened, countless Abyssinians were captured by the Arabs, including the Mother of Bilal, Hammāmah, of Abyssinian royalty, and human trafficked to al-Makkah. These people became slaves.(ibn-Ishāq, at-Tabarī, as-Suyūtī) And, this is actually why Bilal ibn-Rabah was referred to in a disrespectful way, by Abī-Dharr al-Ghifārī (May Allah be pleased with him)…by the way: the narration never states that he called Bilal “Son of a Black-Woman”…that was a translative add-on, as is commonly told concerning this story. Ironically, even Abū-Dharr al-Ghifārī is described as being darkskinned.(ibn-Ishāq, at-Tabarī, as-Suyūtī, Muslim, ibn-Sa`d, adh-Dhahabī, http://www.alajamwalarab.com)

This film also (subliminally) simply is a Muslim-version of 12-Years A Slave: it reinforces Subserviance, Destitution, Acceptance of Slave-Culture, etc. Why is it that Bilal is the only “Black-Companion” highlighted/depicted in film, Narrative, etc. as “the slave/ex-Slave”?! Why is it that none of Bilal’s military and statesmanhood accomplishments are ever highlighted/detailed in film/narrative?!!! For example, did you know that Bilal participated in all the known major-battles during the Lifetime of Muhammad

; did you know that Bilal was the first minister of Bayt-il-Māl/Secretary of the Islamic treasury. He was also the Chief-Administrator responsible for the collection of az-Zakāh/Taxation and distribution of as-Sadaqah/Philanthropy?!!! (Battles Of The Prophet, Lives Of The Companions, at-Tabarī, as-Suyūtī)

The only reason why Bilal is still inaccurately portrayed as being “Black” is because he was once a slave. Had he always been free, no one would’ve ever attributed “Blackness” to Bilal. Let’s actually take a look at what the skin-complexion of Bilal actually was. According to Ahādīth/narrations, recorded in various collections: Bilal really wasn’t any darker than any other Muslim/Non Muslim Arabs of his lifetime. In fact, it was common-place for Arabs to boast and laude their Dark-Complexions and ridicule the complexions of Non-Arabs described as al-Humrah (Reddish-White).(Lisān-ul`Arab: Lexicon of the Arabic-Language, ibn-Manzhūr)

However, ironically, almost every single portrayal of him in Literature, Film, etc. depicts him as “Shaka Zulu Black” and/or the Darkest-Person around. Like, in the Film “The Message” for example…the producers of this film (in both the Hollywood and Arab versions) purposely casted the Darkest/Blackest human being they could find to portray Bilal [ramhu] on screen…the question is why?!!! The answer is simple, to continue the Pseudo-Narrative of equating Blackness to slavery and servitude. Even in the Hollywood version of “The Message”, Bilal is emphatically called “Black-Bilal”…Word4Word…that alone should tell you something.

The Pseudo-Narrative of Bilal is directly paralleled with the Pseudo-Narrative of Sally Hemings: the only Reasons why either of them are ethno-historically falsely-portrayed as being “Black” is because they were both Born-slaves and both their mothers were Black (Hammāmah, Betty Hemings: even Betty Hemings herself had a European-Father but cause she was a alave she was considered “Black”). The Father, Paternal-Grandfather, Paternal Great-Grandfather of Sally Hemings were all White-Men/Slave-Owners. Her Slave-Owner, Thomas Jefferson (who essentially used her as a sex-slave) was actually her brother-in-law (Jefferson’s wife, Martha Wayles and Sally Hemings had the same father: John Wayles).(at-Tabarī; Hayāt-us-Sahābah; Virginia House of Burgesses: British Coastal Colonial Law of Slavery, 1660)

Muslim Matters actually published a review of the movie. [This] film commentary of Bilal not only reinforces my point, as per the continuation of a Pseudo-Narrrative, predicated upon al-`Asabiyyah/aenophobia, but also the major-themes of Islām aren’t even highlighted. Once again, the important narrative of Bilal has been shamefully compromised, at the expense of wanting to capitalize on “Blackness” being at the forefront of World/US Politics via Libya, police-brutality, racial-profiling, human-trafficking, etc.

Why On Earth Are We On Earth?