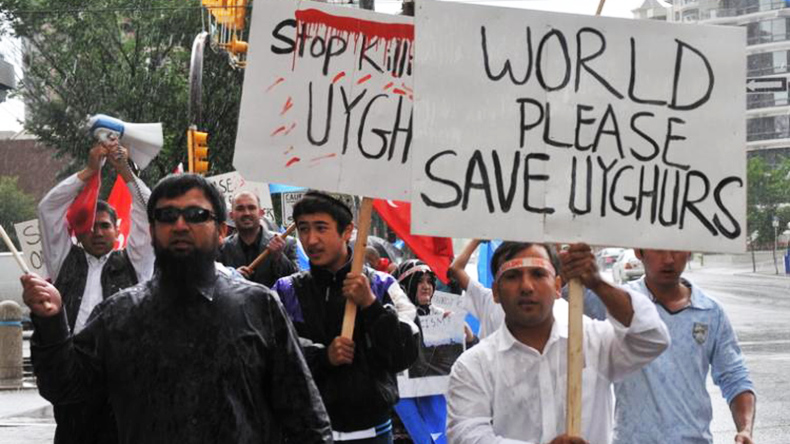 My name is Gulnaz and I am a Uyghur Muslim. My place of birth is East Turkestan but the world knows it as ‘Xinjiang’ because China says so. When I was a child, entering my teenage years as an eleven year old, my family fled Xinjiang and at that time I had seen enough. That eleven year old girl had seen enough to understand that she was not safe in China. Today, at twenty three years old, even after so many years, Xinjiang still haunts me.

Below is my story, though at the same time I have tried to not reveal much about myself. Maybe you will understand my position after reading it. If you feel like it, you may also forward it on to other forms of media.

I remember not being allowed to attend school because I had to work in the fields with my father. Sometimes I would work alone if my father was unwell. My little hands weren’t able to help much but I had no choice. I remember the eyes of Chinese guards looking at us in the market; it made me feel like I belonged to a different planet disliked by them. This was only because we were Uyghurs and Muslims. One night, they stormed our house, searching every nook and corner. My mother hid me in the basement, gave me a little bottle with liquid in it and instructed me to drink from it if an officer tried to touch me. Thankfully nothing of the sort happened and we were told that these were normal search operations. But soon, a horrific incident followed which forced us to flee the country.

One of my aunts in the neighborhood was pregnant with her second child and her family was planning to send her away as Uyghurs weren’t allowed to have a second child. Somehow, the Chinese officials came to know about my aunt and they forced her to have an abortion. In a dingy hospital room one night, she died. Patime was six months pregnant and doctors operated on her while risking her life.

This incident greatly shocked my family, and my father decided to leave China. We fled immediately to Turkey but kept changing places, sometimes countries, every two years or so.

All this time we kept hearing news about China’s crackdown on Uyghurs; the Urumqi Massacre, demolishing mosques, arresting innocents, and about their raids to find Uyghurs living abroad too. My father warned us to never reveal our Uyghur identities and refrained from teaching us about the Uyghur culture too. The terrifying news of Thailand detaining 300 Uyghurs and sending them back to China instilled fear in us again. The fact that no protests or hunger strikes by detained Uyghurs could save them made it clear that if ever China found about our family then we would be punished too.

Despite of all the hardships we faced, my father never compromised on our education ensuring that we received good schooling. He thinks that only a good education can lead us out of this path of slavery or fear. Today, he wants me to become a teacher so that I can contribute towards making our world a better place for everyone. Though I do already feel that I am an activist on the inside, and whenever I hear or come across news of any injustice, my blood boils and I become determined to do something. Our world is perceived as divided between the First World and Third World countries, but Uyghurs aren’t given a place in any of these spheres. We are people living in a fourth country which has been left to suffer by world leaders, but why? Aren’t Uyghurs Human beings too? So, a few years ago, the Uyghur in me took over and I created my account on Twitter (@iamgul8).

Here I try to talk with as many people as I can to convey the struggles of Uyghurs in China. Why should we suffer just because we are Uyghurs or Muslims? What is our crime? Out of the many people I’ve contacted, some of them have always asked about my story, so this is for them. But I can’t reveal anything else because that risks putting my family in trouble.

After this story, my chances of being chased by the Chinese officials are are sure to increase and as a result I may go silent. But our story is important. The world has ignored Uyghurs for long enough, and now they have to stand with us. Like many Uyghurs, another Gulnaz may get abducted, tortured, or killed but her fight, our fight against injustice must be continued by someone – and it has to be you!

Grenfell: 5 Questions About The London Fire That Need To Be Answered