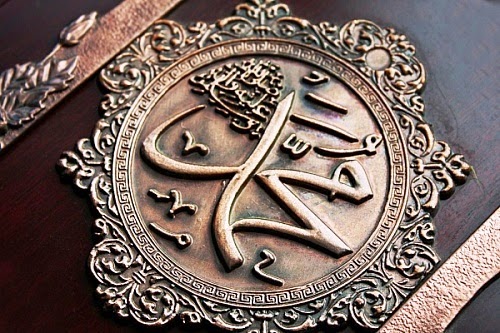 Fourteen hundred years ago, amid a cradle of turmoil, in the scorching barren desert of Makkah, the last Prophet of Islam, Muhammad

was born. His birth marked a momentous era in history. For the one and a half billion Muslims in the world today, he is the last and greatest of the long line of Prophets who brought the message of God to humanity.

spent his life relentlessly campaigning against injustice, selfishness and greed. Despite this, Muhammad

is the most misunderstood of religious leaders in human history. The Orientalist scholar W. Montgomery Watt wrote: ‘Of all the world’s great men, none has been so much maligned as Muhammad.’

For centuries the West has adopted a legacy of reviling and caricaturing him in an crude and belligerent manner.  This long history of Islamophobia roots back to the Crusades, and the events such as September 11 WTC attacks, and the July 7 London bombings have strained relations between Islam and West.

was intolerant of other faiths and that Islam is ‘spread by the sword,’ is contrary to the teachings of the Quran, which insist that there should be no compulsion in religion. Muhammad

detested conceit and aggression that fuelled violence, not only of his time but perhaps that which is inadvertently apparent in some of our contemporary leaders.

legacy is one that is unprecedented, because his life and teachings laid the foundation for the religion of Islam.  He

is praised, exalted, revered, and venerated by over a billion Muslims.  The minutiae of his life are known; after the Quran, the word of God, his teachings shape and guide the lives of Muslims. For Muslims he is a supreme source of inspiration and the ultimate role model and his life and teachings still resonate in the lives of many Muslims today.  Muslims are required to emulate Muhammad’s exemplary manners such as being selfless, tolerant, and concerned for the well-being of others. Despite being an Arab, he was sent by God to all of humanity – his message was one that was universal.

and the early Muslim community endured years of persecution, imprisonment, torture, boycott, killing and abuse.  Following this period, the Muslims eventually prevailed and gained ascendancy over their tormentors and oppressors, returning to Mecca their homeland and birthplace from which they had to flee. One can only imagine what may have prevailed and what the fate of the tormentors would have been, as many waited in trepidation as the Prophet

came with a host of 10,000 to reclaim their rightful home.

demonstrated colossal morality and profound magnanimity, forbidding all forms of aggression and forgiving all the residents of Makkah. Hence, this was a non-violent conquest.  Muhammad

not only avoided mass killings and bloodshed, but also united a previously disparate and war-torn nation under the banner of equality, justice and fraternity. He forgave all his enemies and those individuals who inflicted personal harm on him and his family members.

When life became formidably unendurable for the Prophet

, due to relentless torture and persecution from the Makkan elites, he went to the neighbouring town of Taif in search of support. The leaders of Taif ridiculed him and hurled insults at him. They also steered the children and slaves to pelt him with rocks and stones. Many years later he recalled it as the worst day of his life. Following this dreadful event, it is recorded in Muslim traditions that God sent an angel who was prepared to destroy the town and all its inhabitants, but Muhammad

declined saying: ‘Forgive my people for they know not what they do and, perhaps from them will come a people who worship God.’ Prophet Muhammad

did not seek revenge. He sought reconciliation. He did not preach violence. Again, he advocated peace, and thereby, demonstrated unprecedented mercy and compassion.

was the pioneer of human rights, freedom of religion and freedom of conscience. When he

migrated to Madina in 622CE, Madina was a pluralistic society. Muhammad

established a peace treaty known as the ‘Constitution of Madina.’ This remarkable political-constitutional document was the first ever human rights charter describing a multi-faith society. It is the oldest written national constitution and preceded the English feudal bill of rights, the Magna Carta of 1215, by almost six centuries, and was composed about 1,000 years before the Constitution of the United States. Not only is this treaty important in the sense that it is the first written constitution, it is also contemporary as it conferred equal rights to every citizen.

There is no doubt that the Prophet of Islam

scrupulously applied the principles of honesty and justice to everyone, even those who did not share his faith. He was both a spiritual leader and a statesman. His practical example of forgiveness, social justice and reconciliation exemplifies a living role model for both Muslims and non-Muslims at times of geo-political conflict.

Sadly though, the West has a legacy of reviling and caricaturing the Prophet of Islam

.  For centuries, it has failed to understand the Prophet

and the universal principles he stood for.

.  The truth is that the West can learn a lot from the life of Prophet Muhammad

; his seerah is replete with incidents which show how he denounced the cruel practices of his time, and championed the rights of the weak and vulnerable in society. The medieval rancor and clichés will continue to perpetuate hatred and tension unless he

is understood from the lens of the original sources, rather than the facile distortions.

For Muslims, this is a period that is marked with huge trials and tribulations, and they should use this difficult time to bring to light the compassion and deep spiritual lessons of the seerah to our violent and troubled world.

The compassionate voice of Islam must vibrate louder and should be a dynamic force in our time where we can together build a community through respect and compassion and where all people are treated with absolute respect and equity.

New To The Faith? 10 Pieces Of Advice For Converts To Islam And To Those Discovering Their Faith