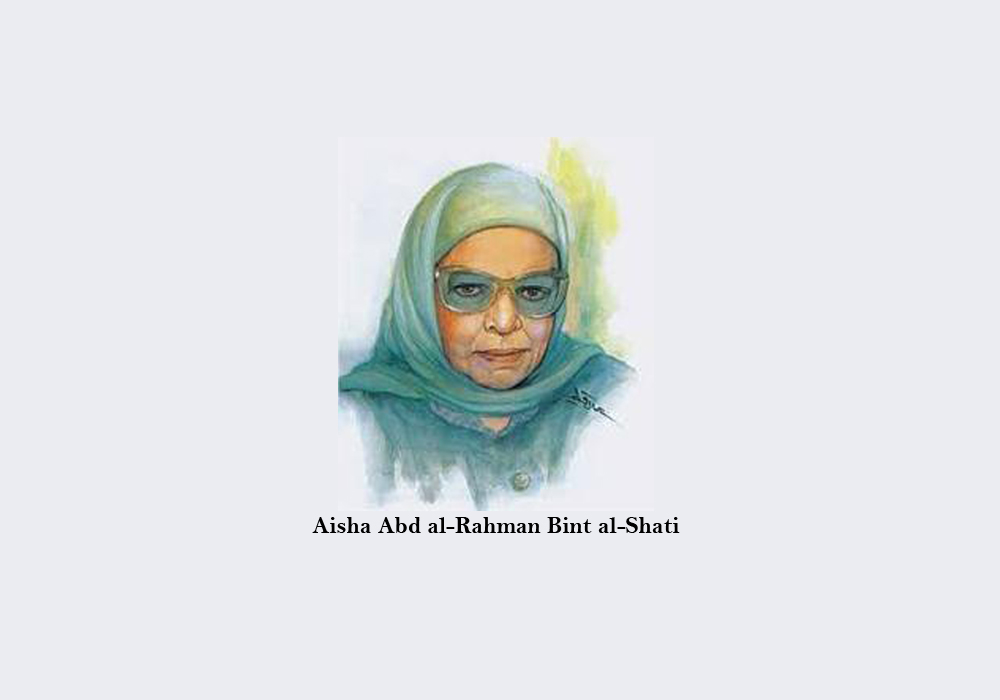 Earlier this month, the Markfield Institute, where I teach undergraduate Islamic studies, was host to a lecture by Dr Shuruq Naguib of Lancaster University. Dr Naguib is a scholar whose teaching and research is mainly concerned with Qur’anic hermeneutics and gender. When I initially shared a flyer for the lecture on my Facebook page, a number of friends and colleagues from far beyond the British Isles expressed their desire to learn what Dr Naguib had to say. This short piece will I hope give a flavor of her fascinating presentation on a singular Qur’anic exegete from modern Egypt. The presentation is based on a scholarly article Dr Naguib is currently writing, although she has written on other aspects of Bint al-Shati’s work in the past, so anyone interested can read more about the exegete in an earlier article of hers.

Dr Naguib’s lecture, entitled “Bint al-Shati’s Critique of the Scientific Interpretation of the Qur’an” was concerned with the ideas of the notable 20th century Egyptian commentator on the Qur’an known by the penname Bint al-Shati’. Islamic history has, over fourteen hundred years, produced many brilliant Qur’anic exegetes. One of the things that makes Bint al-Shati’ more remarkable than most commentators on the Qur’an was the fact that she was a woman.

Born ‘A’isha ‘Abd al-Rahman, Bint al-Shati’s nom de plume, which translates as “daughter of the coast/bank,” was a reflection of her coastal hometown of Damietta, and perhaps also the fact that her maternal grandmother drowned by the bank of the Nile. Dr Naguib characterized Bint al-Shati’ as an independently-minded intellectual with a respectable scholarly pedigree—her great grandfather was a Shaykh al-Azhar, the highest ranking scholar in the Azhar establishment. Her husband, Amin al-Khuli (d. 1385/1966), was a scholar more loosely affiliated with the Azhar, and one whose theory of Qur’anic exegesis was an influence on his wife’s scholarship. Yet, she used a pen name to avoid “scandalizing” her father in an era when, in Egypt, public knowledge of a woman’s name was considered improper.

Critique of the ‘scientific interpretation’ movement

The central focus of Dr Naguib’s lecture was Bint al-Shati’s extremely critical view of the tendency towards reading scientific miracles into the Qur’an, which was all the rage in the Egypt of her time. Dr Naguib spoke of her own experiences growing up in 1980s Egypt witnessing the highly influential “superstar” of this movement: a prominent public intellectual named Mustafa Mahmud (sometimes vocalized Mahmoud) (d. 1430/2009) who expounded his ideas on Egyptian national television through a weekly programme called al-‘Ilm wa-l-iman (Science and Faith) which ran for an impressive twenty years.

Scientific readings of the Qur’an were, in Bint al-Shati’s view, an extraneous and extra-Qur’anic ideological imposition that detracted from both the message of the Qur’an, and a proper appreciation of the central miracle of the Qur’an, namely its rhetorical inimitably. This is closer to the medieval conception of what was considered miraculous about the Qur’an, and is reflected in the writings of figures like ‘Abd al-Qahir al-Jurjani (d. 471/1078) who authored such erudite works on Qur’anic rhetoric and linguistics as Dala’il al-i‘jaz (The Proofs of Inimitably). These were the kinds of scholars that appealed to Bint al-Shati’. She evinces a strong predilection for certain medieval exegetical works and methods, such as those of the medieval masters of balagha, or the science of Arabic rhetoric, like al-Jurjani.

Given her view that scientific interpretations of the Qur’an imposed an ideological layer on our understanding of the Islamic Holy Book, it is unsurprising that Bint al-Shati’ penned critiques of Mustafa Mahmud’s ideas. In the late 20th century, the latter had written a series of articles in the Egyptian weekly magazine, Sabah al-Khayr, that were later published as a book entitled The Qur’an: An Attempt at a Contemporary Understanding (al-Qur’an: muhawala li-fahm ‘asri, 1976). Bint al-Shati’ rebutted these columns through her own set of articles published by the Egyptian state newspaper, al-Ahram, which in turn were subsequently published as a book entitled The Qur’an and Contemporary Exegesis (al-Qur’an wa-l-tafsir al-‘asri, 1970).

The case of the spider

Mahmud argues, on the basis of the modern scientific understanding of the tensile strength of spider silk, that the Qur’anic parable is a reference to the female spider’s household or family, rather than a reference to the spider’s web. Thus it uses the phrase bayt al-‘ankabut, which he understands as: the household of the female spider. Since modern science considers a spider’s web to be formed of an exceptionally strong material, according to Mahmud, this could not have been what the Qur’an was referring to. By contrast, modern scientific knowledge informs us that the spider’s household involves a male and female spider, the latter of whom cannibalizes the male after mating. Thus it is the female’s household that is to be understood from the verse rather than the web. The Qur’anic miracle was thus in the use of the feminine term ‘ankabut which Mahmud claims refers to the female spider.

Bint al-Shati’ objects to the imposition of such a modern scientific lens upon the Qur’anic text on the grounds that this gravely distorts the Qur’anic message. The spider’s web, when mentioned in the Qur’an, is not in her view concerned with the findings of modern science, but rather must be understood in keeping with the linguistic conventions of the Arabic language. On this point, she considers Mahmud’s analysis absurd. The Qur’an, following the conventions of the Arabic language uses the feminine form for individual instances of collective nouns, such as the word for a single tree (shajara), fish (samaka), or bee (nahla). Accordingly, there is no actual gender implied in the Arabic used in the verse in the way Mahmud suggests. Any such interpretation would necessarily be extra-Qur’anic.

Bint al-Shati’ sees a further related risk in tying Qur’anic exegesis to science. This is due to the fact that our knowledge of science, and even the epistemic paradigms on which they are based, shift over time. Rather, she argues that the way to understand the Qur’an is to try and understand the context in which it was revealed and ask ourselves: “what did it mean to its historical recipients?”

Scientifically explaining away the unseen

In Mahmud’s reading, the Qur’anic term “ghayb” or the “unseen” is often recast as the scientific. Premodern Muslim ideas concerning otherworldly non-perceptible concepts like jinn or shaytan, are explained by him in scientific terms. This represents a significant break with the premodern tradition, and one that has tended to be rejected by Muslim scholars.

Bint al-Shati’, then, represents a fascinating confluence of tradition and modernity. She was a Muslim woman who did not consider the hijab to be represented by the headscarf, but was hostile towards the scientism of certain modern Muslim readers of the Qur’an. She was the second wife of an Azhar scholar, was intellectually fiercely independent, but according to Arab feminists, served to reinforce patriarchy in part because she did not, in their view, fundamentally contest the traditional understanding of qiwama. On this point, Dr Naguib notes that Bint al-Shati’s other works suggest that she understood female agency in Islam, especially in relation to seeking and producing knowledge, to be independent of any male guardianship or protection—something attested to by her own life’s work.

The above summary presents a small vista into Bint al-Shati’s prolific scholarly productions, some of which have been explored by Dr Naguib. But Bint al-Shati’ remains unstudied in any comprehensive way, and frequently seems to be ignored outside the Arab world. She undoubtedly deserves to be read and studied far more widely.

We Didn’t Ask For This: American War Thirst Takes Grip