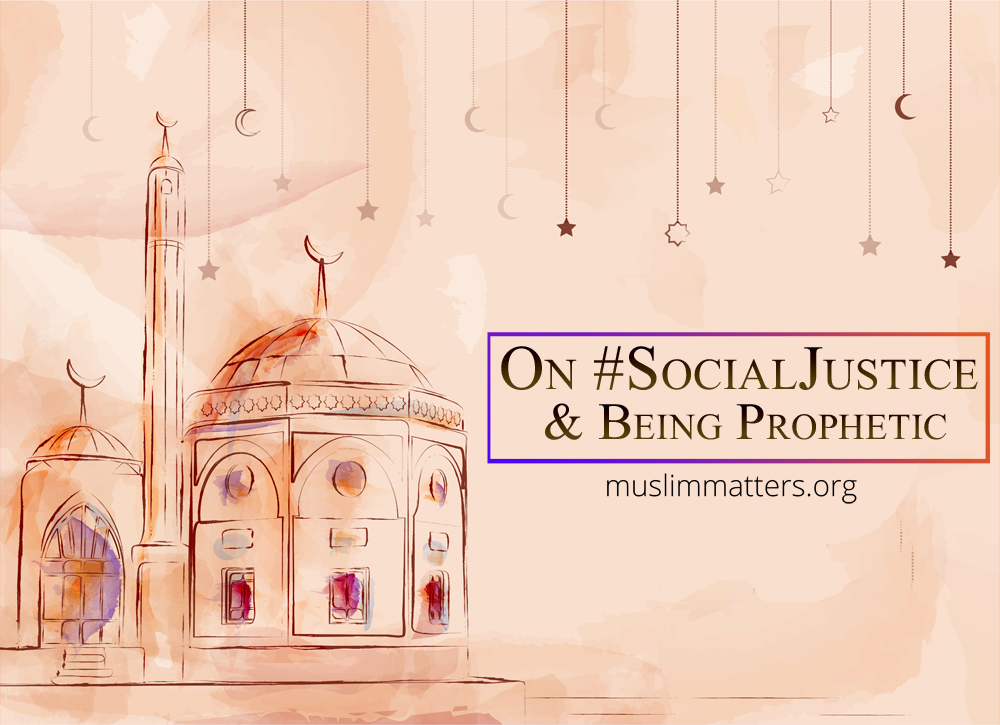 Much ink has been spilt as of late on the topic of social justice. Though injustice is not a new phenomenon (indeed, much of human history has registered rather oppressive conflict), in the modern era it’s extermination has assumed a type of transcendent quality. That is, the elimination of conflict is not merely seen as a proximate cause that leads to God’s pleasure, but instead a type of absolute objective. A material religion, if you will, with androcentric beliefs worshiping at the altar of man. Consequently, the spiritual center that advocates neither for itself nor worldly retribution, but for the Sovereign of the World – the Omnipotent, Omnipresent Lord to Whom we will return, for Whom we live, and by Whose Grace we subsist – has long gone missing.

To what do we attribute this misalignment, and how can we seek to resolve it? Though the underlying pretext that informs this secular discursive is important, for the purpose of this brief article I wish to concentrate more pointedly on the latter question: How we, as a community ensconced in a spiritual crisis, can seek to remedy what ails our inner hearts. Though many paths are provided via divine instruction for improving one’s proximity to God, one of the principle means by which we are taught to seek and demonstrates love for God is by following His Messenger ﷺ. “Say, if you love God, follow me, God will love you…” (3: 31) The love of God’s Messenger is intimately and rather inextricably coupled with the love of God. Obey God and obey His Messenger ﷺ. It is in this divine obedience that one attains the “sweetness of faith” (halawat al-iman), the perfection of faith, and prophetic intercession in the next life.

This is because the Messenger of God ﷺ was not merely the receptacle of divine ordinance and the seal of prophethood (though that alone would have been sufficient to warrant reverence). He represented something far greater. The Prophet Muhammad ﷺ was the supreme creation and the pinnacle of prophethood. His character was superlative. He possessed forbearance (hilm) in the face of insistent hostilities, and courage when confronted by enemies. Despite a life of persistent difficulty and trial, he would remark that “kindness (rifq) is never found in anything except that it beautifies it.”[1] He kept the company of the impoverished, enslaved, and socially disenfranchised. Often visitors would inquire, “which one of you is Muhammad?” unable to distinguish the Prophet’s ﷺ place among his companions in a gathering. But this did not depreciate from his place in God’s sight, nor did it derogate from his honor. Nay, it only increased it. Far from the superficial ostentation that often accompanies monetary affluence, spiritual affluence demands modesty. Anas, a man who served as the Messenger’s servant for over a decade, said that the Prophet ﷺ hated to see people stand upon his entrance, so the Companions would refrain from doing so, wary of making the Messenger of God ﷺ upset.[2] Perhaps this also explains why the Messenger ﷺ would say that one who finds pleasure in people standing for him in a gathering would find for himself a place in the Fire.[3]

But the Messenger ﷺ was not a meek, unassuming man. He ﷺ stood for truth at great personal expense. Driven from his home, God’s Messenger ﷺ did not equivocate when offered spiritual compromise. “If they place the sun in my right and the moon in my left, I will not cease [in spreading the message].” The Prophet ﷺ was a man of intense devotion. It is said that he prayed until his feet cracked,[4] and that the longevity of his prayer at each moment – whilst standing, bowing, and prostrating – was something that could only be marveled at.[5] Though women and perfume were made beloved to him, it was the prayer that he described as the “coolness of his eyes.”[6] This emphasis remained until his last days. In his final (physical) sickness, the Messenger ﷺ mustered up enough energy to attend prayer with his Companions. Upon seeing the prayer in progress, he smiled, exultant at the worship of God.[7] Of his last words were “The prayer! The prayer!” a solemn and everlasting testimony to the centrality of prayer in a believer’s life.

His honorific title was ‘abd, or slave. “Glorified be He Who carried His slave (‘abd) by night from the Inviolable Place of Worship to the Far distant place of worship the neighborhood whereof We have blessed, that We might show him of Our signs!” (17: 1) He was loved beyond compare. His disciples followed in his footsteps (at times, quite literally), hung on to every word of his commands, and relished his company. His presence was angelic, and his smile, contagious. Reproached for having frowned, it was the exceptional nature of the instance that drew this divine correction, for he was not seen “except that he was smiling.”[8] Smiling in the face of one’s brethren was designated an act of “charity (sadaqa).” He ﷺ possessed a truthful countenance. Al-Sadiq (the honest) and al-Amin (the trustworthy) were of his earliest pre-revelatory titles. None heard of him except that they grew enamored by his mention, and none met him except that they loved him. His arrival illuminated Yathrib, transforming it, by his blessed presence, into the enlightened city (al-Madinah al-Munawwarah). And at his death, no day was regarded as darker, more tumultuous, and full of fright. He would instruct the believers to reflect upon his death during times of difficulties as a means of maintaining perspective, for no calamity, no misfortune, no tribulation, no suffering, no pain, and no difficulty compares to the loss this ummah felt upon his earthly demise.[9]

It was this life that we are told to emulate. Living in the service of God, and in doing so, upholding God’s rights. The rights of God intersect the spiritual and mundane, the mosque and the market. These rights were brought to life and are understood functionally by the conduct of our beloved Messenger ﷺ. When wrongs occur, the believer is offended not out of self-assertion or righteous indignation, but prophetic zeal. Transgressions against God inspire action, for even the dichotomous “rights of God” (huquq Allah) and “rights of God’s slaves” (huquq al-‘ibad) operate under the presumptive basis that man’s rights are protected and confirmed by God. In other words, what constitutes oppression does so because God says it does, not because it subscribes to an amorphous contemporary notion of rights and wrongs. God loves not the oppressors, those who fail in their duty to God and in their duties to men. It is for this reason that associationism (shirk) is described as “colossal tyranny” (zulm azim). (31: 13) And of men, the Prophet ﷺ warned against the prayer of the afflicted, irrespective of religious affiliation.[10] It is this normative framework from which our beliefs, ideas about the world, and notions of right, wrong, justice, injustice, spirituality, and prophetic conduct emerge.

It seems these days that in our haste to alleviate the pain of the allegedly aggrieved, how numerous they may be, we are willing to sacrifice the rights of God and stray from the model of His Prophet. This, in turn, becomes another aggression, far weightier than the first.

For believers, spirituality forms our center. It is the fuel that gives us energy, and the nourishment that gives life to our soul. It inspires us in profound and altogether transcendent ways, and causes us to relinquish much that is otherwise desirable. Though our spiritual states ebb and flow, it is through the life of the Messenger ﷺ that we are taught how to recover our better selves. This, for us, is what it means to live “prophetically.” In its absence, we stand to gain little and assume the pathetic purchase of a “constricted life.” (20: 124) A paltry sum in this (lesser) life, and nothing in the (permanent) life to come.

“O you who believe! Shall I show you a commerce that will save you from a torturous punishment? That you believe in God and His messenger, that you strive in the cause of God with your wealth and your lives. That is better for you, if you but knew. He will forgive you your sins and admit you into Gardens beneath which rivers flow, and pleasant dwellings in Gardens of Eden. That is the supreme triumph. And [you will obtain] another [favor] that you love – victory from God and an imminent conquest; and give good tidings to the believers.” (61: 10-13)

“Indeed, God and His angels shower blessings on the Prophet. O you who believe! Ask blessings on him and salute him with a worthy salutation.” (33: 56)

Between Theology And Pragmatism: Traversing a Slippery Path