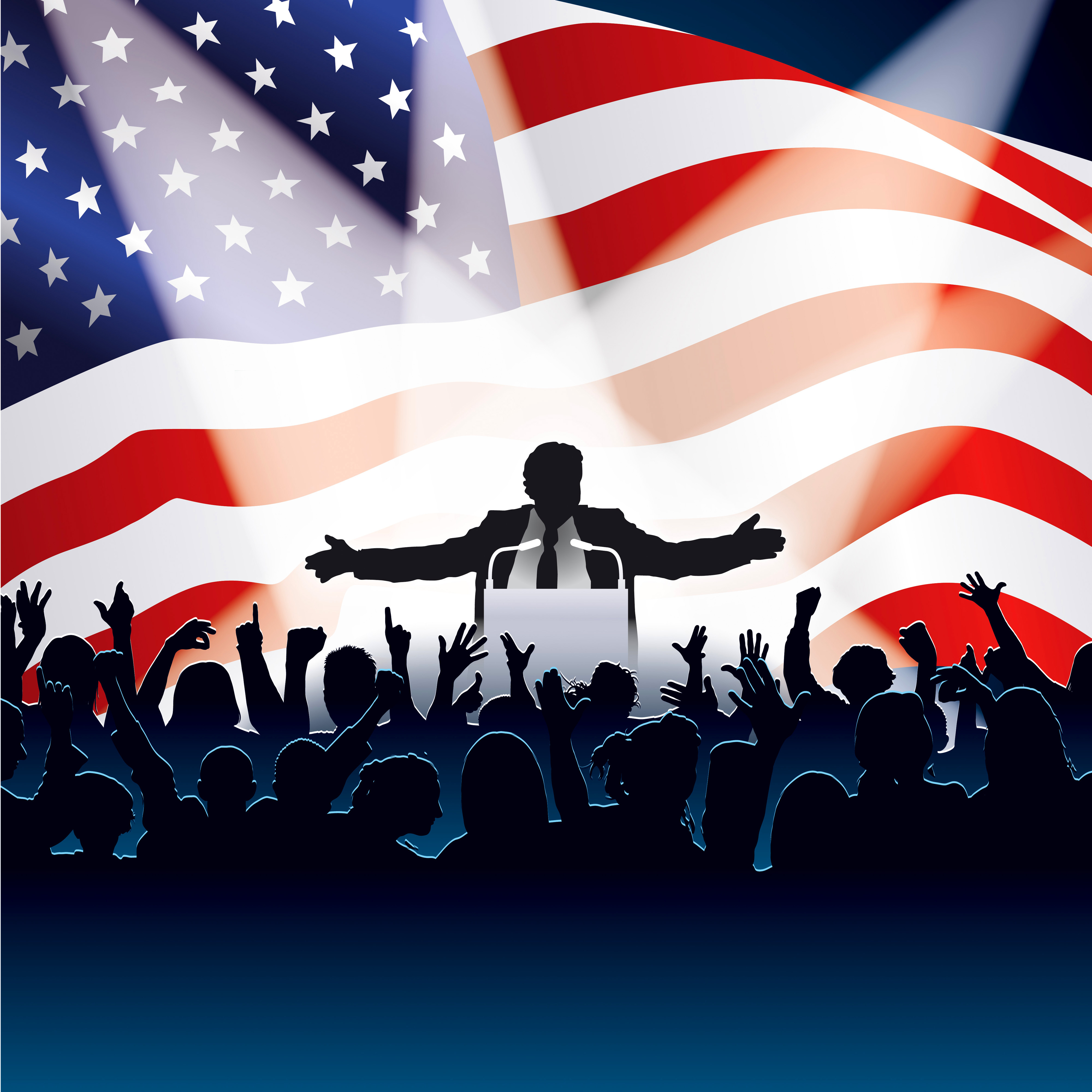 President Donald J. Trump wants to unite the world against what he calls “Radical Islamic Terrorism”, but by his own admission, he has yet to figure out “what the hell is going” when it comes to why such violence is occurring. He doesn’t exactly possess a sophisticated understanding of the political, social, psychological and ideological factors behind contemporary terrorism. Of course, this has not prevented him or other Islamophobic allies from rallying around a common agenda of attributing violence to the faith itself and promoting discrimination of Muslims.  Last month, the Washington Post published an article entitled “Trump’s coming war against Islam”, outlining the central dogma of Stephen Bannon, Michael Flynn, Jeff Sessions, and other Trump’s appointees  – that Islam itself is an enemy to western Judaeo-Christian civilization, and the cause of terrorism.

The notion of countering radicalism and religious violence is frequently used as the pretext for targeting Muslims and directing venomous attacks at their faith identity, Islam. But what seems to be missing is any intellectual discourse which factually examines the causes of violent movements, including modern religious violence, and analyzes how these ideologies develop. In an effort to rectify the contemporary discourse and educate on the subject, the Yaqeen Institute recently published a comprehensive review entitled, “Forever on Trial – Islam and the charge of violence“. This study explores the complex factors underlying ideological violence, the manipulation of religious terms and texts by radical groups, and provides an evidence-based demonstration of Islam’s clear denunciation of violence. The Islamic teachings on the subject are epitomized for example by the following verses in the Quran which Islamophobes and extremists alike ignore:

Fight only those who fight you and do not commit aggression (2:190)

Violent movements will exploit any ideology to serve their agenda

Is Islam itself the cause of religious violence, or do terrorists opportunistically exploit religion to service their own agenda? The first point worth noting is that violence can be and has been perpetrated on the basis of numerous creeds and ideologies. Consider a violent Christian cult like the Lord’s Resistance Army in Uganda, which had kidnapped over 66,000 children by 2005 forcing many to become child soldiers or sex slaves, or the violence perpetrated by the Soviet regime in the name of eradicating religion and replacing it with “militant atheism“, or the ethnic-based violence seen in the Rwandan genocide, or the nationalism that fuelled World War 1, etc.

It is not the religious or secular content of an ideology that spawns violence, but rather it is the infusion of xenophobic ideas which terrorists use to dehumanize the outsider and permit atrocities against their victims. 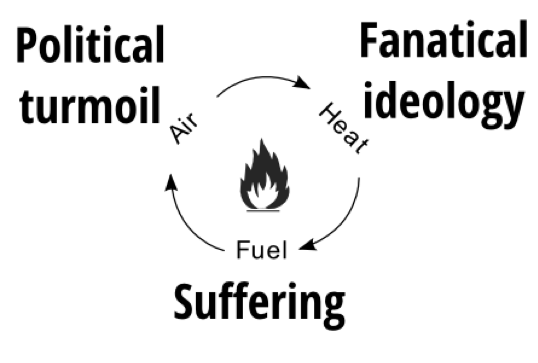 There are many reasons for the emergence and proliferation of violent movements. Sociologists point to the impact of decades of warfare and despotic dictators and the vulnerability of a brutalized population; political scientists point to the influence of leaders and ideologues in mobilizing the population against a system perceived to have failed its people; and psychologists focus on the profile of those recruited, identifying factors like social isolation and alienation. In order to have an intelligent conversation on the subject, all of these factors must be considered rather than a reductionistic approach which attempts to blame everything on religion. Like a combustion triangle which depicts the prerequisites of fire – air, heat, and fuel – the proliferation of extremists movements depends on political turmoil, fanatical ideas, and a population whose suffering can be exploited.

Just because Terrorists call themselves Islamic doesn’t mean they are

Although the same five-letter word ‘Islam’ is used by both the terrorists and the global faith community of 1.6 billion Muslims, that doesn’t mean they are referring to the same thing. By insisting on using the label ‘Islam’ for terrorists, media pundits and politicians insist on lumping criminals together with one fifth of the world’s population.

The fact of the matter is, there is a clearly discernible extremist ideology that permeates radical groups, and it is composed of ideas that are anti-thetical to Islamic teachings, with many ideas that would be regarded as pure mythology from the standpoint of mainstream Islamic theology.  By perseverating on the word ‘Islam’, pundits ignore these critical doctrines which set violent movements apart from mainstream Muslims. So what are the hallmarks of the ideology of modern-day groups like ISIS? Their mythology may be summarized as comprising five key pillars:

Each of these doctrines has been explained in detail in the Yaqeen study, “Forever on Trial – Islam and the Charge of Violence”.

For mainstream Muslims, their understanding of Islam is epitomized by the Qur’anic instructions to respond with peace in the face of hostility (25:63) and to treat with compassion and justice those who do not fight you (60:8). The Prophet Muhammad said to “Show compassion to all those on earth” and to “Donate in charity to people of all faiths” (as recorded in al-Tirmidhi and Ibn Abi Shaybah, respectively).

On the other hand, terrorists reject the aforementioned ethical values of the Islamic faith, of compassion and justice. They have taken the vocabulary of Islam but redefined the words ‘Jihad’, ‘Shari’ah’, etc, in order to construct a totalitarian ideology of xenophobia and dehumanization.

The word ‘Shari’ah’ actually refers to a path towards God which has five aims – the preservation of faith, life, intellect, family and property. Far from the perverse caricature on television, the Shari’ah cannot be interpreted in manners that are cruel, unjust, or bereft of wisdom, as explained by the classical theologian Ibn al-Qayyim. A recent study by Yaqeen Institute has also shed light on the way portions of the Shari’ah, like the Hudood laws, have been misrepresented in western culture.

The word ‘Jihad’ refers to an effort exerted for the sake of coming closer to God and caring for His creation; physical force is only permitted for the sake of repelling oppression or aggression on the part of others (Qur’an 22:39-40). Yaqeen Institute has also published on the concept of Jihad and how it has been misrepresented by extremists and Islamophobes alike.

All of this goes to show why the popular suggestion to interrogate Muslims on their support for terms like ‘Shari’ah’ and ‘Jihad’ makes absolutely no sense – it assumes and legitimizes the definitions assigned to these terms by criminals and terrorists.

Can education and facts correct virulent hatred and ignorance? It may be too much to hope for, particularly in an era of ‘post-truth politics’ and alternative facts where people would much rather be surrounded by myths that reinforce their opinions than truths that challenge their bigotry. Nevertheless, the way forward is to collectively support educational efforts that foster the values of love and respect for all human beings.

Related Topics:Dr Nazir Khanforever on trialIslammuslimsQuranYaqeen Institute of Islamic Research
Up Next

Executive Order on ‘Muslim Ban’ – What Do We Know