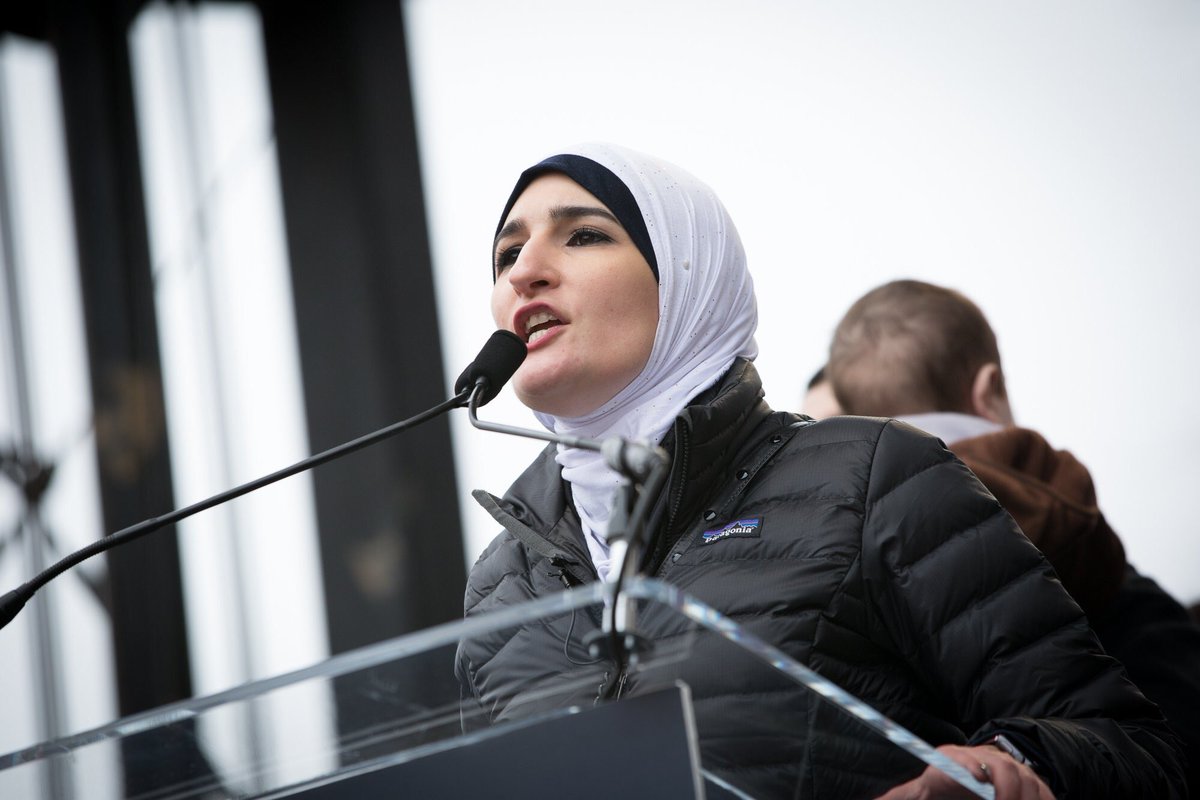 Linda Sarsour is one of four national co-chairs of the Women’s March which drew millions of women around the world. Her efforts were instrumental in the success of the largest protest in American history. Now she is being viciously attacked by right wing trolls and white supremacists because she is unapologetically Muslim, as are so many of us are. She has devoted her life to fighting for every marginalized community in the country and now it is time for us to stand up for her. A petition was set up to support a truly heroic woman. Sign Here
#IMarchWithLinda

After helping coordinate one of the most successful marches in history, Islamophobes are viciously attacking @lsarsour #IMarchWithLinda pic.twitter.com/tNuq67nwru

A world of shuyukh, activists and the people have stood up to defend her

This is not harmless trolling- propaganda like this has helped put innocent people in prison.
If they come after her they are coming for all of us. Bottom line- if you are Muslim you defend one of ours against anti Muslim bigots. If you are not a Muslim- defend Muslims from Islamophobic attacks. If you are white, defend people of color against Neo-nazis.- Hena Zuberi

Thank you @lsarsour for helping to organize the march and build a progressive movement. When we stand together, we win. #IMarchwithLinda

Linda Sarsour @lsarsour is a fearless & eloquent voice for all of us. I am proud to call her an ally and friend. #ImarchwithLinda

#IMarchWithLinda because she is an inspiration for the kind of leadership this country needs. Compassionate, selfless, loving and inclusive. pic.twitter.com/dqTmu8v66Y

There are few people I trust, support, learn from & lean on more in this work than my Sister @lsarsour #IMarchWithLinda pic.twitter.com/diLjYMcJkf

#IMarchWithLinda because I've known her to march with anyone in need. Shouldn't these trolls be busy making America great again? @lsarsour

#IMarchWithLinda because she's a compassionate human being, a loyal friend, and a fierce sister. pic.twitter.com/PW4SAUhZfv

These despicable attacks on @lsarsour simply demonstrate that she's got people shook. #IMarchWithLinda

Islamophobes have been attacking #WomensMarch organizer @lsarsour. We stand with her against this type of hate and bigotry. #IMarchWithLinda

If you see something is not right, not fair, not just, you have a moral obligation to do something about it @repjohnlewis #IMarchWithLinda pic.twitter.com/swWPP0sGq0

Thank you @lsarsour for your service, you leadership, and your fearlessness! #ImarchwithLinda

I have known Linda Sarsour for 10+ years. She is a friend, she is mentor, she is a leader. Proud to call her my sister. #IMarchWithLinda pic.twitter.com/VBPO3bp8HM

If you come for @lsarsour, you gotta come thru me. I'm standing in front. #ImarchwithLinda @PHILLYresist126

#IMarchWithLinda because @lsarsour fights for my Jewish community & all people with fierce love. You come for her you come for us all. pic.twitter.com/xBNbz0XKtJ

I stand unapologetically with @lsarsour because she is what Democracy looks like, and she is what Makes America Great. #IMarchwithLinda

Not this time, trolls. I stand with the incredible and inspiring @lsarsour. In defiance. Indivisible. #IMarchWithLinda

#IMarchWithLinda because she epitomizes the essence of the Palestinian spirit. @lsarsour we got you!

#IMarchWithLinda because she is my sister in Islam and despite all of our individual stories this Islamophobic system is bigger than you and I. Because this is not new. This day has proven what we already know- that even if you are the co chair of the largest march in US history with a million on your side- white supremacists, the right wing & Zionist lobbies will criminalize you and dehumanize you, regardless of who you are, how you look, and what you’ve done. -Aber Kawas

Who Gets to Point Fingers: Media Coverage of the Ft. Lauderdale Shooter