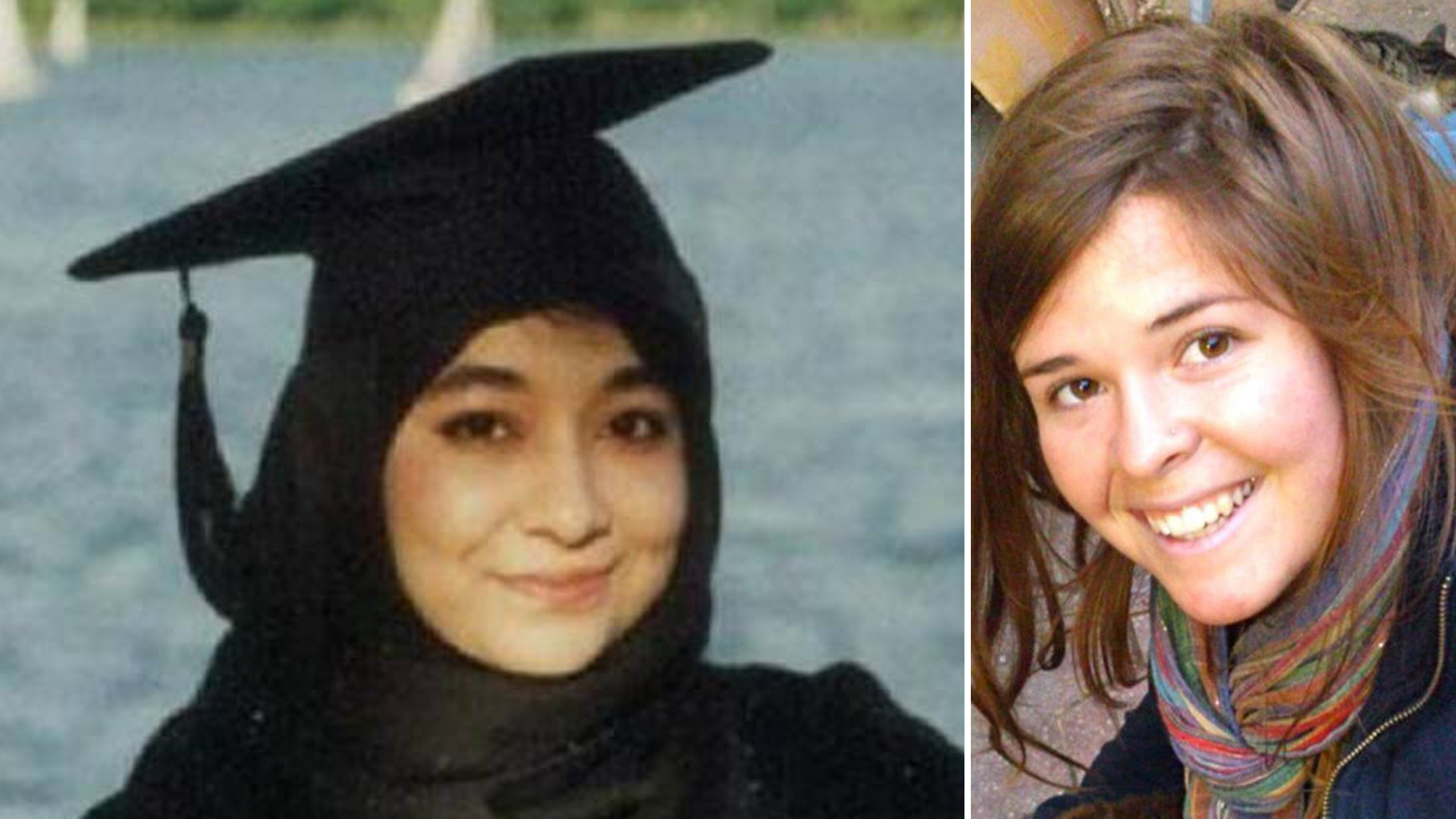 I was the campus minister for Kayla Mueller when she was a student at Northern Arizona University, and maintained close contact with Kayla until she was taken hostage by ISIS in August of 2013.   Kayla was a mentor to my daughter as she became involved in human rights advocacy.  I have worked closely with Kayla’s family since she was taken hostage and have continued to work with the Muellers since Kayla’s death, as they continue to try to learn all that they can about Kayla’s captivity and death. I participated in the Hostage Policy Review, and like you, my heart is heavy with all the suffering we continue to see in Syria and among the Syrian refugees.

I write to you as mother to mother; and also as a mother whose heart and care extends far beyond my circle of family to all God’s children.  As you know, in July of 2014, ISIS issued an ultimatum demanding the payment of a 5 million Euro ransom or the release of Aafia Siddiqui, or Kayla Mueller would be killed in 30 days.  I did not know Aafia’s story at that time, and from my perspective, the Muellers were never told of the allegations of rendition and torture or grievances with respect to Aafia’s human rights, one of many important aspects of Kayla’s kidnapping and captivity that was not shared with the Muellers.  I still wonder how that could be so if we (the USA) were serious about understanding the reasons behind the ISIS kidnapping, torture and eventual murder of our US citizens; in order for the families to respond in a way that would have given them the greatest perspective and clarity in securing their loved ones safe return, sparing the American hostages from the horrific torture and brutal taking of their lives.

Once it was learned that Kayla had been given a life sentence in retaliation for Aafia’s sentence, I thought we should reach out to the Siddiqui family, but we were strongly discouraged by the FBI.  With only 72 hours or less until the timeline to meet the demands was set to expire, I reached out to Mauri Saalakhan, President of Peace thru Justice (now The Aafia Foundation). Mr. Saalakhan’s response was one of unreserved compassion and assurance that Aafia and her family would not want violence done to anyone in Aafia’s name, under any circumstance.

Despite their grievances and grief, Aafia’s mother and sister in Pakistan were unwilling to remain silent in the face of the torture of a young woman they did not know, even though Kayla Mueller was a citizen of a country they felt were doing great harm to their own daughter.  On the eve, which I thought was to be Kayla’s last, we received a letter from Aafia’s family urging Kayla’s captors to release her without condition, ransom or barter, but out of compassion and righteousness.  We also received a letter from Mauri Saalakhan, an American Muslim human rights leader, making a public plea drawing from the Koran’s teaching of righteousness and compassion, that also called for the immediate and unconditional release of Kayla Mueller.

We shared with Mauri and Aafia’s family the letter sent to President Obama pleading that consideration be given to Aafia’s situation, with hopes that both women could be returned to their families and their countries.  The Siddiqui family acted with urgency and care, holding Kayla’s situation in confidence.  To this day, they have spoken little of their efforts to gain Kayla’s freedom, allowing Kayla’s family to always lead with what is shared and what is held, understanding the pain of a mother whose daughter has been taken and tortured.

Mrs. Obama, I think you can imagine the hope those letters brought in that 11th hour, and yet the Muellers were instructed to wait—to not immediately forward them to Kayla’s captors despite her dire situation.  One could only imagine that the reason was because Kayla’s release was imminent through other channels, but as you know, that was not the case.  We were told to request that Peace thru Justice not release this plea publicly despite the influence it could possibly have through the many influential and international Muslim leaders that are part of their 100,000 plus network.

At the time that we were trying to save Kayla’s life, the Siddiqui family was also trying to determine if Aafia was still alive in Carswell Federal prison, as their access to Aafia has too often and for too long been compromised.  There has been far too much secrecy about Aafia’s care in our federal correction system; allegations of rendition, torture, solitary confinement—denial of basic human rights.  All of this fuels a cycle of violence, as Aafia is to Pakistanis what Kayla is to Americans—a symbol of injustice and torture imposed for political reasons.  We as a country are better than this, we should not be afraid of transparency in our corrections system.  We should be eager to either demonstrate beyond a doubt the standard of care and human rights we proclaim, or take the necessary steps to correct a situation as best we can.

There are many steps that could have been taken that would have assured Aafia’s human rights were being protected, but also would have possibly made a way for Kayla Mueller’s safe return.  Why did we not even quietly give the International Red Cross and Aafia’s sister, Dr. Fowzia Siddiqui, immediate access to Aafia to determine her medical condition, asking that the same access be given to Kayla Mueller?  Why not, in light of the Senate Torture Report, look seriously at the circumstances of Dr. Aafia Siddiqui’s disappearance, allegations of being held and tortured in our CIA prison in Afghanistan, and the ongoing secrecy and allegations of mistreatment in Carswell prison?  I came to the devastating conclusion that Kayla was left behind in the hands of ISIS because keeping the truth of Aafia’s situation hidden was more important than the safe return of a bright and committed American aide worker.  We must right our wrongs and we must afford Aafia Siddiqui her human rights under international law.  This is the time when we, as a country, must face these allegations and act with justice, righteousness and compassion, for Aafia and her loved ones’ sake, and as a step to end this horrific cycle of violence that continues to claims victims across this world.

I am writing to you this Christmas night, as I believe that like me, you and President Obama seek the peace and hope of this holy season for people of all faiths and all nations.  I know that what we are asking takes tremendous moral courage in the face of hatred, bigotry, racism and fear, but that is our Christian calling—our response—to the gift of Christmas in our Christian tradition.  I continue to hold Kayla close to my heart, remembering her compassion, moral courage, resiliency, strength and the unwavering compassion that claimed her life.  It has always been my belief that had Kayla been released she would have worked tirelessly for the release of all captives, including Aafia Siddiqui, having been drawn into Aafia’s situation through her own kidnapping, solitary confinement and torture.    I have vivid memories of Kayla protesting the torture at Abu Graib while a student at Northern Arizona University, and can picture her in front of a hand-painted “No to Torture” sign as if it was yesterday.

Mrs. Obama, I feel a great debt to the family and loved ones of Aafia Siddiqui, for the seriousness and urgency in which they responded when they learned of Kayla Mueller’s situation.  I pray and I hope, that in the name of peace and compassion, and in response to a Divine goodness that transcends our knowledge and understanding that you will urge President Obama to do what is just and right by Aafia Siddiqui.