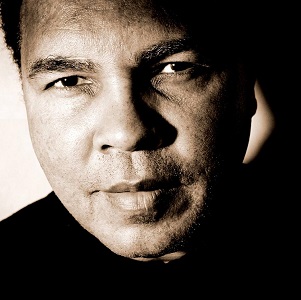 I wasn’t going to write this.

When three-time world heavyweight boxing champion Muhammad Ali passed away on June 3 at the age of 74, surrounded by his family in Scottsdale, Ariz., I was dealing with my own familial loss.

Four days before Ali, my mother-in-law had passed away at the age of 61. She took her final breath in the presence of myself and my wife, who had been serving as her in-home caregivers for two and a half years while she battled a terminal form of cancer.

During the week of Ali’s death, my time was spent planning memorial services, writing obituaries and hosting grieving visitors. My mind and heart were occupied on matters closer to home. I wanted to write something meaningful on Ali, but I just didn’t have it in me.

So while it seemed every sportswriter and sports fan had offered some opinion on Ali’s life and legacy, I had nothing of substance. A week after his passing, when Ali was laid to rest following an Islamic prayer service in his hometown of Louisville, Ky., I still had nothing. And by then, it seemed the window had closed.

But as he has done so often in my life, my father provided the right motivation.

What keeps coming to mind when I think of Ali is his utter uniqueness.

One of the highest forms of praise we can bestow on an athlete is to make him or her a standard by which others are judged and compared.

When the NBA introduces the members of its 2016 rookie class this Thursday during the NBA Draft, for example, pay attention to who the incoming players are being compared to.

Ben Simmons, the presumptive No. 1 pick, is often compared to LeBron James. Potential No. 2 pick Brandon Ingram is often compared to former MVP Kevin Durant. Those comparisons aren’t just compliments to Simmons and Ingram; they are also homages being paid to James and Durant. The incoming prospects are viewed through optimistic eyes as possessing the potential to be like established greats.

Across all sports, we have seen athletes come and go who were called the next Michael Jordan, the next Emmitt Smith, the next Mickey Mantle or Diego Maradona.

And yet in a sport that is built on hyperbole and over-exaggeration by fight promoters who mimic carnival barkers, no one has dared compare any boxer to Muhammad Ali.

In our current sports media climate that thrives on “hot takes” and big, bold opinions, no athlete in any sport has been called the next Muhammad Ali.

And that’s not because his in-ring resume was untouchable. Ali finished his career with a record of 56-5 with 37 knockouts. He won the aforementioned three world titles and defeated an impressive list of Hall of Fame heavyweights.

But he also lost a handful of fights, and not all of those losses were to all-time greats. He also missed three years out of his prime athletic years while fighting the U.S. government over his refusal to serve in the Vietnam War. Ali was amazing, but there have been arguably more talented boxers. There have been fighters who won more championships and posted more impressive records.

So why is Ali the only one known around the globe simply by the moniker “The Greatest”?

In that respect, Ali holds a place on the most exclusive of sports lists: His name sits next to Jackie Robinson as athletes and historical figures whose impact on sports and society leaves them without peer.

From putting America on blast for its racism and hypocrisy when it was still very dangerous for a Black man to do so, to taking a loud and very public stance against the Vietnam War when it was dangerous for any American to do so, to in later years lending his resources to a variety of social and political causes, Ali’s strength and compassion shined even when his body couldn’t always keep up.

A Facebook friend of mine who goes by Rcchard Antony put it best: “Ali was both superhuman and super human.” 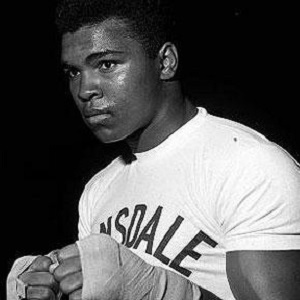 When I tell people that I was interested in the religion of Islam and had been studying it since I was about 10 years old before I converted, Ali is part of the reason why that statement is true.

I was such an avid reader as a kid that I used to steal books from my elementary school library. But one of the first books I remember actually buying at a store was a short biography on Muhammad Ali geared toward young readers.

In that book, I read about how Ali’s boxing odyssey began when a neighborhood bully stole his bike and he wanted to learn how to beat the kid up to get it back. And so for the same reason that I, as a kid who was no stranger to bullies, was able to instantly relate to Mike Tyson, I was an Ali fan from that moment.

Even though I had never actually seen Ali in the ring — even though he had fought his last pro bout exactly two months before I was born — Ali was automatically one of my favorite boxers.

The book then covered Ali’s amateur career — culminating in his gold-medal victory at the 1960 Olympics — and the early stages of his pro career as he built a 19-0 record before earning a shot at heavyweight champion Sonny Liston.

Around the same time Ali defeated Liston to become champion for the first time, he was becoming closer with Malcolm X, Elijah Muhammad and the Nation of Islam. He converted to Islam and announced he was changing his name from Cassius Clay to Muhammad Ali.

While a book written for pre-teens understandably didn’t go too deep into the details of Islam and what it meant to be a Muslim, the story of Ali — along with the stories of Malcolm X and NBA legend Kareem Abdul-Jabbar — helped draw me toward a serious study of Islam.

Three of the earliest adult-level books I remember reading were The Autobiography of Malcolm X, the memoir Giant Steps by Abdul-Jabbar, and Muhammad Ali: His Life and Times by Thomas Hauser. They helped build the foundation on which I would eventually, as an adult, embrace the religion and convert to Islam.

Once upon a time, not long ago, I heard somebody say something that stuck with me at a time when I was still learning the basics of Islam: “Be the Muslim you want to meet.”

I took that to mean that I should model myself after whoever I would consider to be the model Muslim citizen, of the person I would want to be my religious mentor. It is the exact reason why more than one billion Muslims around the world strive to emulate the beloved Prophet Muhammad (peace be upon him).

In terms of conducting myself like a Muslim whose example is ultimately more attainable, who displayed some of the admirable qualities of the Prophet in this modern society, Muhammad Ali is my kind of role model.