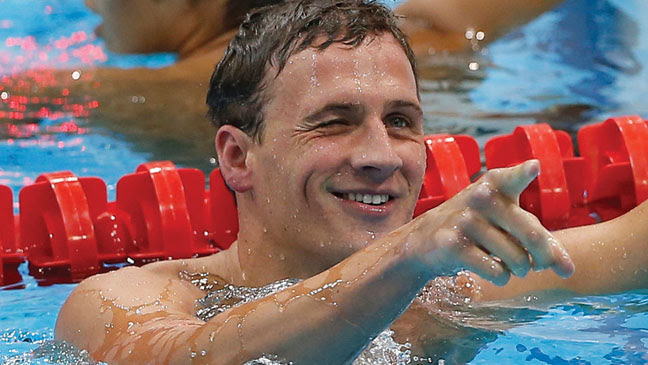 By the year 2010, Tiger Woods was a self-proclaimed collage of ethnicities, four-time golf master’s champion, Forbes List powerhouse, and a publicly convicted adulterer. Woods’ reputation as the rising phoenix of model minorities made him a household name. Where else but America could a person of color undermine the racist yarn the young country is quilted with in such a way? 2010 avalanched upon the Woods’ legacy, fracturing an image the golf world was unfamiliar with seeing. After losing $22Million in endorsements in a matter of months, Woods’ still took to a podium to share his heartfelt regrets for cheating on his wife. Mainstream media looped the dramatic account of Woods’ wife confronting him and his subsequent car crash that occurred while he tried to evade her. By the end of 2010 Woods’ lost more than endorsements, he lost his whiteness, or rather his hallucination of it. It was not some outlying ideology he used when he explained to reporters his racial “percentage”, he was doing what many assimilationists do, making America comfortable with him, by moving as far away from Blackness as possible. He was ambitious, but not white. Mainstream media pointed it’s gattling gun at Woods and during a national press conference viewed by hundreds of thousands he told an ugly truth. Perhaps whiteness could have acted as guardian for Woods. Maybe Woods’ would still be held in pristine honor.

Lately, the lives of sports stars have been under the fog-lights of public scrutiny. They are responsible for being ambassadors of American values, which is why Woods’ mistakes cost him so much. You can’t error while representing an ideal, especially while having mixed racial percentages.

In recent day the events surrounding the lives of white athletes like Ryan Lochte have shown the sinister parts of American values.

Olympic swimmer Ryan Lochte found himself engulfed in a situation that would drown his career this August. Lochte a 32-year-old white male on a privileged trip to represent the United States of America in the Rio Olympics, not only displayed America in it’s rawest form but exemplified the whiteness Tiger was reaching for.

On August 14, 2016 at 4:00AM in the morning Ryan Lochte accompanied by Jinny Feigen, Gunner Bentz and Jack Conger stopped a gas station to use the lavatory. The Olympians had come fresh off gutsy performances celebrated with an eventful evening in a hospitality house entitled “Club France.” After being met with a locked bathroom door, officials say they began to beat at the door, eventually relieving themselves on the walls of the business. Camera footage shows security guards approaching, then apprehending Lochte and friends .They found themselves in no trouble, just responsible for paying $20.00 for damaged property. Before Brazilian officials could make a statement about the incident, Lochte conjured a poetic narrative that placed the audience front row in a robbery of innocent white olympians staged by security guard imposters, in dangerous Rio. His story was believable. It was white. It was welcomed.

Journalist Kenneth Rapoza wrote a mouthy editorial in early January adding ammunition for his alibi, “Brazil just cannot — cannot — get a break. If it’s not their Banana Republic-esque politicians and oligarchs, commodity deflation, inflation and pesky mosquitoes spreading the Zika virus to the world, its violent crime. A new report out this month has Brazilian cities dominating a list of the 50 murder capitals of the world.” Rapoza cited Rio as being safer than Detroit, St. Louis and Compton but the headline screamed, “Brazil is The Murder Capital of the World.” Not to mention a viral video of Rio’s dispossessed youth preying on Olympic tourists for snatch and runs of anything they could get their hands on piercing through timelines. The Western World was ripe for Lochte’s jangled fable.

On August 15, all parties involved in peeing and property damage were accosted by Rio police. A video showing no sort of piracy surfaced refuting every detail of Lochte’s account. Twitter went to work. #LochteGate, a hashtag that put the evidence of cancerous white privilege on a world forced media to candidness. 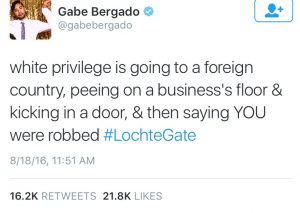 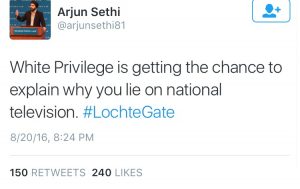 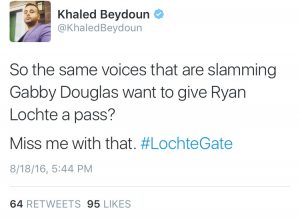 Yet and still anchors and pundits chose to reduce what occurred to ‘kids having too much fun’ during their work vacation in Rio. Lochte, a 32-year-old white male was allowed to be referred to as a child while just days later in Newark, New Jersey, a 10-year-old Black child was met with shotguns to the face after being mistaken for a 20-year-old suspect. 12-year-old Tamir Rice was gunned down by police for playing with BB gun in Ohio, an open carry state.

We can’t reduce what Lochte did to an awful lie. It has to be seen in the context of Whiteness colluding to lynch innocent men, rob the sanctity of young girls, usurp mineral wealth from the dead hands of aborigines and having the audacious thought pattern of telling the free-world what it sees is not real. White lies matter. They matter to white lives. Had it not been for cameras and swift action by the Rio police, Lochte would have re-entered America with a “boys will be boys” story to tell over games of beer pong.

This sort of privilege parade carries a deadly consequence that as of late has come to a head, costing women the sanctity of their bodies. In the past 3 months, three white men have been pardoned from severe sentencing due their fluorescent futures. David Becker, Brock Turner, and Austin Wilkerson will never serve any complete sentence in prison after being found guilty of sexual assaults. Becker’s attorney expressed his heartfelt relief saying that the 18-year-old, “Can now look forward to a productive life without being burdened with the stigma of having to register as a sex offender.”

He continued, “We all made mistakes when we were 17, 18, 19 years old, and we shouldn’t be branded for life with a felony offense and branded a sex offender” and “Putting this kid in jail for two years would have destroyed this kid’s life.”

In order of severity Becker survived the “harshest” punishment of the three. Brock Turner, a former elite swimmer at Stanford was found guilty of not only sexually assault but putting foreign objects into an incapacitated young woman’s vagina outside of a party. Against the instructions of the prosecution the  judge, Aaron Persky, ruled in favor Turner being sentenced to only 6 months in prison. He will be released after serving just three months in jail, for rape.

And in Colorado, Austin Wilkerson, 22, was found guilty of sexually assaulting an intoxicated woman and will have the pleasure of leaving prison day-to-day to attend school and being placed on probation for the next 20 years.

None of the oppressive infrastructures that people around the world have laid verbal indictments to would stand without the presence of this sort of exceptionalism. Crimes against humanity, and even the people of countries already battling through negative perceptions, are passed off as boyish gestures devoid of accountability. Lochte and many others solidified what a great portion of people already know, that the world still acts as a white society’s playground. White men like Lochte, Wilkerson, Becker, and Brock Turner in particular, are left to commit abuse after abuse, only to be hailed for their youth and inherent innocence. In the path of their play, lay places like Rio, people like their victims, scarred.

“Whiteness has nothing to do with culture and everything to do with social position. It is nothing but a reflection of privilege, and exists for no reason other than to defend it. Without the privileges attached to it, the white race would not exist, and the white skin would have no more social significance than big feet.” ~ Noeal Ignatiev

The American Muslim Community Is Inextricably Linked To Kaepernick’s Protest