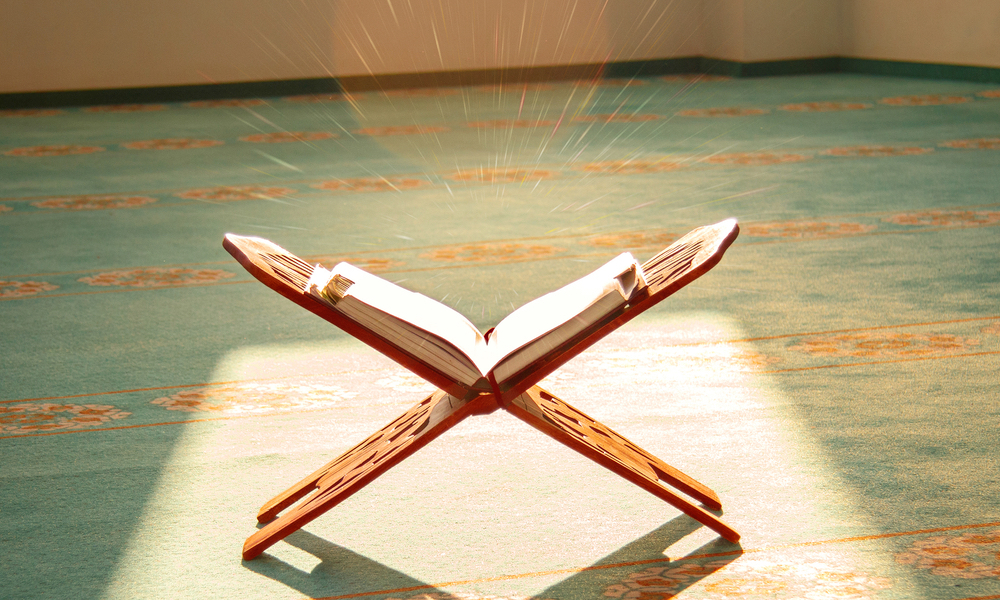 The chapter of Light contains the verse of light; one of the most commented upon verses in the Qur’an. In verse 35, Allah

describes His light as a niche within which is a candle. The candle is encased in glass which twinkles and gleams like a star. The fuel of the candle is the rich and pure oil of the blessed olive tree, from the blessed land of Quds, which itself is so bright that it almost glows even when untouched by fire. It is light upon light and Allah

guides to His light whomsoever He wills.

There are many commentaries for this verse and what Allah

is referring to here. One of the more famous ones is that the verse is a parable of faith. The candle refers to the light of īmān. Īmān is found in the heart or the glass which itself is originally pure and gleaming. The heart in turn, is within the chest or the niche. The blessed oil that in itself shines bright is the Qur’an. When the two lights merge; the light of īmān with the light of the Qur’an it is an unstoppable combination. That is light upon light.

From verse 2 onwards we find the topic of chastity and modesty, whether encouraging it or mentioning those things that go against it. Verse 2 speaks about the punishment of fornication. Verse 4 is about the punishment of those who accuse chaste women of adultery without proof. Verses 6-9 are about accusations of adultery between spouses. Verses 11 to 22 then relate to us the incident of the slander of ‘Ā’ishah and her innocence.

Verse 27 is about the etiquettes of seeking permission before entering the houses of others so as to preserve their modesty. Verses 30 and 31 are the command of Allah

for the believing men and women to lower their gazes and guard their chastity. We then have the verses of light from 35 to 42.

Verse 58 then speaks about the need for those under the age of maturity to seek permission before entering upon their parents in their private rooms during certain times of the day and night. Verse 60 is about the concession for old women when it comes to their dress code. The following verse, 61, also speaks of concessions, but this time for the blind, sick and disabled. The Sūrah then concludes.

As you see from the previous few paragraphs, the Sūrah more or less speaks only about modesty, the main exception to this being the verses of light. Therefore, what is the relationship between these two distinct topics?

The verse of light speaks about the light of īmān, not only in terms of its power and glory when it is shining bright, but also its fragility if we do not protect it. We can never take it for granted. The Prophet

said, “A man will wake up with īmān but sleep as a disbeliever, and a man will be a believer at night and awake a disbeliever.”[1] It is as fragile as a candle that can be extinguished with a simple blow of breath or a slight wind. Therefore, Allah

informs us of the issue which will help preserve that light of īmān for us, and its opposite will extinguish it; and that is modesty.

If a person preserves their modesty and stays away from anything that diminishes this, they preserve the light of Allah

which He places in the hearts of the believers. The Prophet

said, “Īmān is seventy odd branches… and modesty is a branch of īmān.”[2] It is reported that a man was once on his way to see ‘Uthmān

during his caliphate. On the way he passed by a beautiful woman and began to stare at her. He then continued until he reached ‘Uthmān. When ‘Uthmān saw him he said, “How dare one of you commit zinā and then enter upon me.” The man said, “O ‘Uthmān, do you receive revelation? How do you know what I did?” ‘Uthmān replied, “Rather, it is a light which Allah places in the faces of the believers, so when they sin it diminishes.”[3] This is why the scholars would say that knowledge is the light of Allah

does not give His light to those who sin.

combines between light and modesty, as through the preservation of modesty does one’s light shine bright, and with a lack of modesty, that light becomes weaker and dims.

All Judgments Aside – Ramadan and Special Needs

Zakat, Poverty and the Kitchen Sink