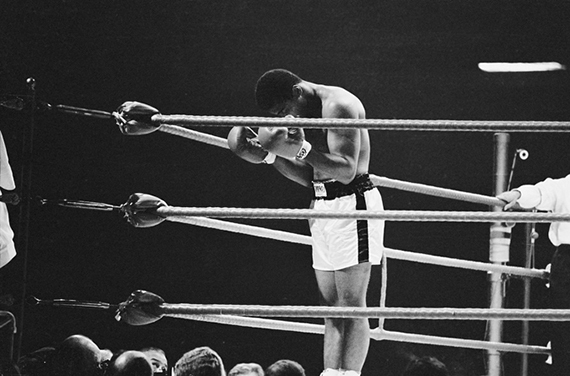 The Muslim ummah and the world at large has lost a beloved hero.

Muhammad Ali touched the lives of so many in the US and around the world. We are saddened by his loss and pray for his complete forgiveness and a beautiful home in the highest of heavens, Jannat al-Firdaus. Inna lillahi wa inna ilayhi rajioon. Surely we belong to Allah and to Him shall we return.

Below are tributes from some notable scholars and contributors. We would love to hear your own reflections on Muhammad Ali. What did he mean to you? How did he inspire you to be a better Muslim? Please comment below.

“This life is not real. I conquered the world and it did not bring me satisfaction. God gave me this illness to remind me that I’m not number one, He is.” – Muhammad Ali

Today a legend passed. A shining example of truth, courage, and justice. You will not be forgotten dear brother. Muhammad Ali isn’t just the greatest athlete of all time, he’s an American hero that won the world over with his commitment to the truth. Allah knows how much I’ve always loved and admired him.

This video is very special as Muhammad Ali

reflects on the meanings of God, life, death, and the hereafter. Take 10 minutes and watch this profound speech.

“I know where I’m going and I know the truth, and I don’t have to be what you want me to be. I’m free to be what I want.” Muhammad Ali

May Allah have mercy on him and elevate his rank, and join him with the greatest in Jannatul firdaws. Ameen

UPDATE: The legend himself has passed away less than half an hour ago – truly to Allah we belong and to Him we shall return. We pray for his forgiveness and ask Allah to bless him with Paradise.

I’m greatly distressed to hear that Muhammad Ali is in critical condition and might be close to the end.

There is no denying that Muhammad Ali is the most famous and influential American Muslim, ever. It is doubtful that anyone will replace that status for the foreseeable future. If the only good that he brought was to bring a positive image of Islam, and to spread the name of our beloved Prophet

in every household and on every tongue in the world, it is a life that is indeed enviable. But in addition to that, he has had a stellar career as the single greatest athlete, of all times. As well, he was an icon of positive political activism, and of preaching truth to power. His court case about refusing the draft for Vietnam was fought all the way to the Supreme Court, which he eventually won.

He converted to what he thought was Islam at a time when Islam was an unknown religion; then he became Sunni after Malcolm X introduced him to mainstream Islam, and he’s been a proud and public Muslim ever since.

If that wasn’t enough, he is one of the most eloquent and poetic star athletes that the world has ever seen. His quotes, like his medals and awards, are legendary (my personal favorite is: “The man who views the world at 50 the same as he did at 20 has wasted 30 years of his life.“)

We must all go eventually, and Muhammad Ali has lived a good life. Yet still, the heart is saddened and the eyes are sad to see a living legend go before our eyes. Whenever it is his time to go, I pray that Allah eases his suffering, grants him a dignified death, accepts the good that he has done, and overlooks his mistakes.

Br. Muhammad Ali! I know you will not read these words. Yet still, I write them because I am at once proud and humbled to consider you my brother, and to know that we are a part of one Ummah. I consider it a personal loss that I never got to meet you. But I sincerely pray that eventually we shall be together in Jannah, and I look forward to the day that you will dazzle me with your fiery eloquence and make me laugh with your humble humor.

May Allah bless you in your remaining time on this earth, and grant you the best in the next life! Ameen…

Born great, died greater- today we mourn the death of a man who, in difficult times, stood firmly upon the path of justice, a man who was often a lone voice for reason and change, a man who has shaped not only the landscape of Muslim America, but also humanity for years to come.

The visceral reaction we have to his loss is a testament to his greatness as not only a fighter, but also as one of the most revolutionary thought leaders of our time.

We all have so much to learn from Muhammad Ali: a beacon of excellence, inspiration, strength, and integrity. I pray he joins his namesake in Firdaws. Please keep him and his family in your prayers this Ramadan.

May Almighty Allah accept the striving, Dawah, good words, and courage of Muhammad Ali. May Allah open up the doors of Paradise for him. He stood for Islam in difficult times, he inspired many of us to resist the War in Vietnam and all immoral conflict, he continued developing in his faith till he reached the true teachings of Islam through the Last Prophet Muhammad (pbuh); He continued speaking out against injustice and evil till his end. Inna Lillahi wa Innaa ilaihi Raji’oon.

I was blessed to spend time with Muhammad Ali a few times, and the fondest memories I have are two: him joining my family to meet his new brother in faith Mike Tyson (as pictured here in Sports Illustrated), and him signing “About Islam” pamphlets and handing them out to fans who wanted his autograph.

The world has lost a champion. May Allah forgive him, have mercy on him, and grant him Jannah without account.

Muhammad Ali meant something special to everyone, but to Muslims he was an incredibly inspirational figure. You have to understand that for a once great civilization, Muslims have precious few public figures that represent the best of what we used to be and not where we are right now.

All across the Muslim world, Ali stood out as an example of someone who was comfortable in his own skin and the world was comfortable with him too. Truly and example that will be missed.

Muhammad Ali told me about his greatest fear. May God forgive his sins and give him a great place in Jannah. ‪#‎RIPMuhammadAli‬.

The last time I met him at his home with Sound Vision team, I asked him what is his greatest fear. This interview was later published by Sound Vision. He remained silent for a moment and then said not being able to enter jannah. In those days he was still able to speak but with difficulty.

It was a very difficult moment. Everyone including his wife sister Lonnie Ali along with Sound Vision team were all teary eyes as Brother Ali remained silent, somber but without tears.

I used my hand and words to comfort him saying that God will give him jannah since he has done so much good.

He stared at me in silence as though questioning if I am sure about myself entering jannah. May Allah give him the Jannah which he desired and may God keep us on the straight path.

A photographer was clicking away and all those moments are recorded.

I have worked with Brother Muhammad Ali on several projects including to stop genocide in Bosnia with Bosnia Task Force. I have great memories of him. One such memory is this photo in which he asked me to pose this way for a photographer. May Allah keep us all serving humanity to please Him.

It is important to keep mentioning that ‪#‎MuhammadAli‬ was a Muslim as today about 30% Muslim children avoid using their Muslim names at school. Not all Americans know that he was a Muslim. I remember marching with Ali in downtown Chicago for the rights of Palestinians during the first intifada when a reporter from CBS asked me why is Muhammad Ali marching. I told her that he feels for the persecution of fellow Muslims in Palestine. She responded saying I did not know that he is a Muslim. May Allah grant him Jannah.

Muhammad Ali (then Cassius Clay), boxing world heavy weight champion in London 1966. Ali always prays to Allah before the first round of a title fight in London. © Thomas Hoepker / MAGNUM