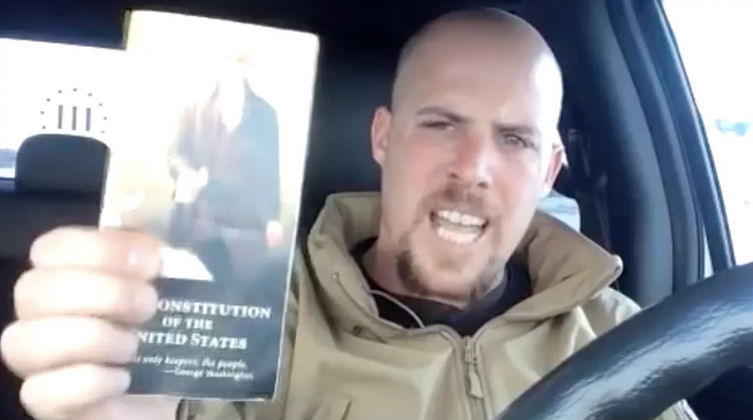 Last week another Muslim convert with a mental illness was arrested in an elaborate, expensive and yet familiar “sting operation” revealing a “New Year’s Eve” ISIS plot.  Also, over the weekend 150-armed white Christian “militia” members occupied a federal building and took over a large swath of federal land without a fight. The typical response is for for Muslim leaders to call for “Countering Violent Extremism” to be expanded to non-Muslims, particularly white Christians and to continue cooperation on the current “Muslim-only” CVE. This is the wrong response.

The FBI’s modus operandi for “stings” is well known and established now. Agents typically select a Muslim convert with a mental illness; someone they will identify (in their own words) as a “retarded fool” without a “pot to piss in.” They may lure the individual, who had no notion of committing any crimes in the first place, the opportunity, motivation and means to break a federal law.

This, combined with discriminatory prosecution (nobody can be arrested for flying to white supremacist meetings or for white supremacist Twitter activity) has the effect of pumping up the FBI’s terrorism arrest record to make a problem look bigger than it actually is. Since the FBI’s victims appear to be selected based on how weak and marginal they are, they can expect little resistance to this tactic. Who wants to defend “material support” of ISIS? Indeed, American Muslims are less likely to condone violence against civilians than Americans as a whole.

Muslim leaders want to be gracious hosts to everyone, especially law enforcement during a time of increased Anti-Muslim hate. Ideally there should be no barrier between citizens and it’s governmental institutions, including Federal Law Enforcement. But at what point does this instinctive kindness, generosity and show of unity become damaging to the Muslim community?

Muslim Leaders have a Duty to their most vulnerable community members

Muslim leaders owe a duty to the people who come to the Masjid, which should be a safe place for families, including, children, teenagers, the poor, the sick, the intellectually disabled and the otherwise vulnerable. Every Muslim should have the right to pray in peace.

For some Muslim leaders, federal law enforcement is known for it’s “partnership,” “friendship” and common interests. These claims do not hold up to scrutiny.

White Supremacist and Right Wing Violence is not Federal priority

We should address the self-interested reason to build a communal relationship with Federal law enforcement first (the FBI and DHS): the alleged commitment to protect the Muslim community from white supremacists or right wing extremists. No such commitment exists. Take the recent spate of hate crimes against Muslims. Recently, in Northern California a man was arrested after he made threats in front of a mosque “I am going to kill you all.” Police found and detonated what they described as a bomb. They arrested the man then released him on bail. The FBI, unsurprisingly, was absent. This was a matter for local police.

When the FBI is involved, such as the threat by American Christian Robert Doggart to murder American Muslims and destroy property in the upstate New York hamlet of Islamberg, no terrorism charges were filed at all. His punishment amounted to a slap on the wrist. As Dean Obeidallah noted this past summer, the FBI did not hold a news conference or even a press release in the case, common even for robbery cases and certainly common for ISIS cases.

Though the FBI routinely issues warnings about potential terrorism by ISIS, it does not issue warnings about plots by right wing extremists, though this is a significantly larger threat not just to Muslims, but to all Americans.

There is good reason for this disinterest in right wing extremism. A report by the Department of Homeland Security produced an intense political backlash, forcing the Secretary of the Department to apologize and close down the office that dealt with right wing extremism.   The FBI knows better than to alienate the politically powerful. So they don’t.  It is far safer to go after mentally ill Muslims.

In the FBI’s budget request for fiscal year 2016, nearly all attention is focused on ISIS and Al-Qaida, it does not make any mention at all of right wing extremism or white supremacists. They are simply not a priority.

It is foolish to assume the FBI and DHS care about something when they seem to go out of their way to prove the opposite.

“Islam is a Threat to our National Security”

This past month A Federal Court Appeals Court in California  heard an appeal on a lawsuit called Fazaga vs. FBI, by Muslims who were subjected to dragnet surveillance based purely on their religious practice.

Craig Monteilh, a convicted felon and con artist who was sent to fake conversion to Islam, pray all prayers at the Islamic Center of Irvine and befriend local Muslims for the purpose of entrapping them or turning them into informants was told “Islam is a threat to our national security.”

In it’s pursuit of Muslims who regularly attend a masjid, the FBI was following the discredited “radicalization theory” model that posits increased Muslim religiosity is an indicator of future terrorism.  Monteilh’s career as an informant, until the Islamic Center of Irvine obtained a restraining order against him, lasted from 2006-2007. The case however still continues. The government is as adamant as ever that it did everything correctly.   There is no reason to believe this program with other informants has stopped. The FBI has recruited more convicted terrorists than Al-Qaida, Al-Shabab and ISIS, combined. According to the Washington Post, the FBI employs as many as 15,000 spies in the United States, much of this activity is focused on the Muslim community.

Indeed, in the Fazaga case itself, where the Obama Administration is arguing the FBI’s discriminatory and unconstitutional investigative techniques cannot be challenged because of the “States Secrets Privilege”, a doctrine normally reserved for international intrigue (remember, we are talking about a people praying at a place of worship). A Federal District Court Judge agreed to the FBI’s claims of “States Secrets” in large part based the “threat” made evident by all of the other terrorist plots by Muslims, many of which were the FBI’s own plots.

It starts with a lie

The Monteilh saga actually started with the FBI lying to the Muslim community in a masjid. Muslim community leaders in Orange County arranged for a town hall meeting at the Islamic Center of Irvine in 2006 because the relationship was obviously bad. Part of the audio from the event was included in a ‘This American Life’ segment, (readers should hear the whole thing). [An FBI speaker had previously told the business club the agency was monitoring Muslim students at the University of California in Irvine (UCI), where there had been a prior assault of a student by an agent, and at the University of Southern California (USC).   The FBI was singling out young people on the basis of their religion, which was offensive to many.]

In that meeting at the Islamic Center of Irvine, an FBI representative stated emphatically that his agency did not send informants to mosques and attempted to walk back his agency’s hostile disposition when they talk to anti-Muslim bigots. He was of course lying, since the case of Monteilh emerged soon afterwards.

In many communities, the FBI is routinely involved with “mosque outreach.” This may be in the form of a town hall or attendance at Jummah or Tarawih. They will typically have a Muslim community member act as a surrogate to arrange such gatherings.

It is important for leaders to understand the FBI is in no way interested in better long-term relations with the Muslim community.  They are not interested in learning about Islam or making friends with Muslims. That is not their job.

Freedom of information act requests found that “Mosque Outreach“ interactions that the FBI had with the Muslim community was for the purpose of spying. While many Muslims may consider this information gathering harmless, this opinion is irrelevant. The FBI may be in a position to identify vulnerable people, such as those easy to manipulate and recruit into a fake terrorist plot or as informants.

So what should Muslim Leaders do?

As Americans it is vital everyone, particularly community leaders, interact with all community institutions, including law enforcement. However, act carefully and in the best interests of the weakest and most vulnerable in the community. No matter what any Muslim leader thinks, the job of federal law enforcement is not to be their ‘friend’.  While some communities may feel the FBI in their area is not as hostile to Muslims as they are in places like Southern California or New York,  these suggestions are relevant to Muslim activists and leaders nationwide:

9 Tips for Muslims Who Want To Make Social Change