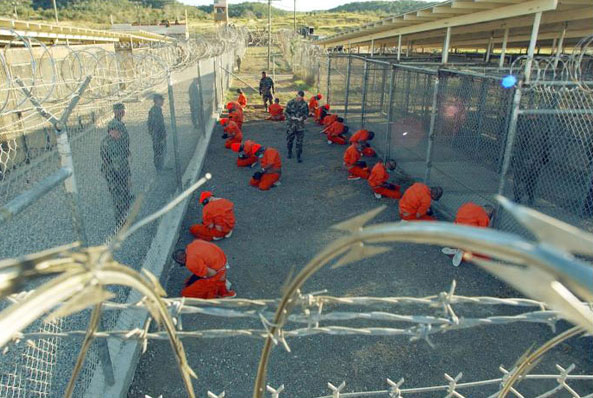 We are in a historic moment. Renewed Islamophobia has emerged in the mainstream. GOP candidates’ anti-Muslim rhetoric and an upsurge of hate crimes against Muslims have gone unabated. The Syrian and Iraqi refugee crisis continues to spiral out of control. San Bernardino, Paris, Ankara, Baghdad and many more – the politicization of Islam is polarizing and forcing many to take sides.

This was the context for my trip to Guantanamo Bay, Cuba with 13 others from Witness Against Torture – a group demanding the United States close the Guantanamo Bay detention center, a “War on Terror” prison that has become synonymous with torture, solitary confinement and indefinite detention. 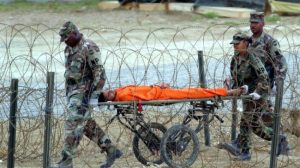 As a Pakistani-American Muslim, I was drawn to participate in this delegation in order to challenge the existence of Guantanamo; a place that exists to scapegoat, silence and hold Muslim communities domestically and abroad, collectively responsible. As a prison that houses an exclusively Muslim population, Guantanamo is not only an example of Islamophobia, but it also reinforces and reproduces the systematic targeting of Muslim bodies.

As Guantanamo approaches its 14th year of existence, more than 100 men remain behind its prison bars. Through hunger strikes and the sharing of their stories, the men in Guantanamo have a fierce resolve in pursuing their freedom. This fact has emboldened my resolve to challenge the face of this injustice too.

But times are daunting for Muslims, especially for those of us who want to make social change. This reality impelled me to compile a list of things that help me work through my own fear, and give me a sense of empowerment while I continue to protest for the closure of Guantanamo.

1. Talk and convene with other Muslims

I was blessed to be in Guantanamo with a Muslim sister who helped validate experiences around our reality as Muslims that we often suppress to be polite. Building community around shared experiences and uniting around our shared identity creates the groundwork for healing and organizing for systemic change and for the challenging of Islamophobia, whether perpetrated by the state or society. My advice to you, therefore, is to embrace your Muslim sisters and brothers, and find an organization or start a community group of your own.

2. The entire Muslim community is not culpable for acts of terror in the name of Islam.

This remains true although we are expected to apologize and draw a clear line of separation between terror and Muslim Orthodoxy. Since the 18th century, politicizing Islam for purposes of colonization has demonized an entire community and set us at odds with European colonizers. We are the newest inheritors of Islamophobia. We are the subject of someone else’s reality that presumes us #innocentuntilprovenmuslim. We sometimes feel compelled to apologize because of a real fear of being targeted. We have real knowledge and actual experience of people in our community being picked out and imprisoned indefinitely – i.e. Guantanamo. Yet, apologies keep the Islamophobic narrative intact and do nothing to address violence at its root causes. We must consider this strategy in all our current and future advocacy efforts.

3. Focus on systemic issues, like ending war and militarism.

Scapegoating of Muslims forces us to choose between a binary: good Muslim or bad Muslim? Both stereotypes disempower us from defining who we are and who we can be. Our right to self-determination is stifled. We can resist that binary and opt out of proving our innocence by focusing on systemic issues.

It’s scary, even alienating, to take action at our disappointment in the status quo. In Guantanamo, I was one of two Muslims in the delegation, and both of us were well aware of the risks; we constantly had to work through our fears of government repression and isolation. Conceived differently, we reflected that our ability to be our full selves was stifled because of our internalization of the subordinate status imposed upon us. Through tears, knowing glances and late night conversations, we began to overcome the discouragement and shame that are a result of internalized oppression, together.

5. Build alliances with other communities – Muslim and non-Muslim. 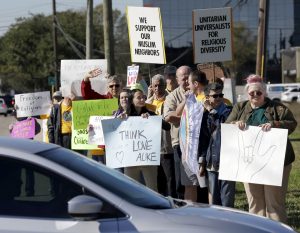 Decades of organizing around mass incarceration, detention and deportation, colonization, forced removal and genocide show us that racial disparities cannot simply be surmised as “racism” but are part of an elaborate system called white supremacy. Islamophobia is one of many pillars propping up systematic racial and ethnic oppression. When we begin to understand injustice as institutionalized rather than the result of a few “bad people,” we make alliances and change possible. Solidarity makes us all stronger.

6. Talk to your family members about their experiences with Islamophobia.

Ask open-ended questions and make space for them to share without judgment. Care and love are stronger than oppression. Before leaving for Cuba, I shared my trip with my terrified mother who recalled her experiences of being targeted by police and neighbors. Inviting her to share experiences she normally suppresses and assuring her that taking action to end Islamophobia in all its forms can bring change, was grounding for us both.

Create channels for support and demand it. Healing processes help stop the cycle of victimization.

8. Know your rights and fight for them, even if you know they will be disregarded.

Civil liberties are a human right, but the law is often sidestepped in favor of a political agenda. Knowing the law and our rights with law enforcement when taking social action is important for keeping ourselves and our community safe.

Don’t be afraid to call yourself an activist and organizer, and don’t be afraid to resist definition. Saying change is possible and taking the powerful step towards inserting yourself into the narrative provides inspiration and a safety net for other Muslims to demand justice too.

Muslims resisting Islamophobia and working in coalition towards peace and justice is nothing new. That is so important to remember. We come from a humanity that speaks truth in the face of oppression. As I continue to organize the shutdown of Guantanamo and end oppression of all people, I hope my Muslim family heeds the call to make transformative change towards a democratic society, too.

Uruj Sheikh is a Muslimah living in Secaucus, NJ. She is a member of Witness Against Torture–a community of activists using nonviolent direct action and cultural organizing to close Guantanamo Bay Detention Center and end torture. She  works at the War Resisters League in New York City and is a member of Organization for a Free Society.