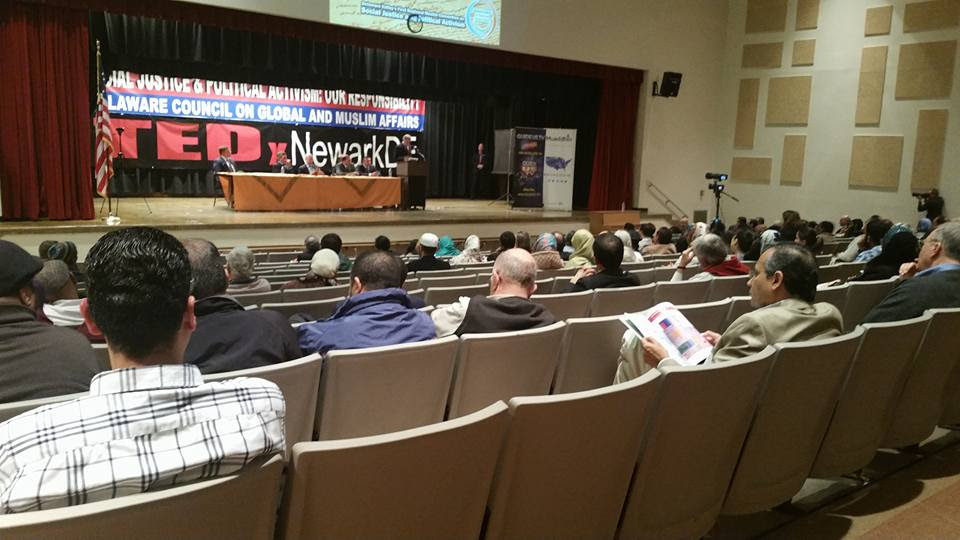 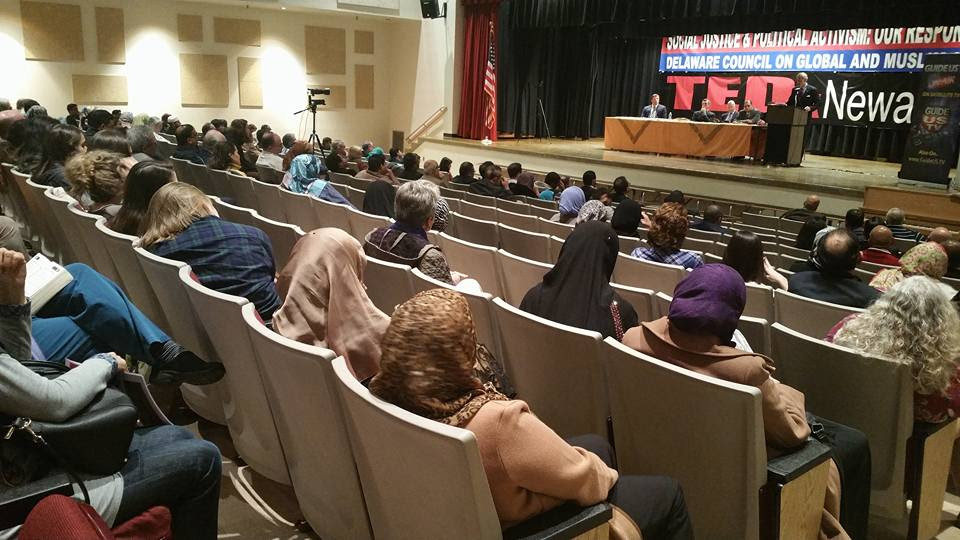 Profoundly hateful comments by Donald Trump, reminiscent of Nazi Fascism, and a number of incidences of violence, vandalism and arson against Muslims and Islamic centers has focused global attention on the outbreak of anti Muslim bigotry in America. No doubt, Republican Presidential candidates have unleashed a mini tsunami of hate against Mexicans, immigrants, refugees and Muslims. But let us not allow this high pitched rhetoric to obscure the fact that not only have Trump and his cohort’s statements been condemned widely, many Americans from all walks of life have gone out of their way to express support for and solidarity with Muslims.

One of the most outstanding expressions of American solidarity with Muslims was witnessed this month in the state of Delaware, where interfaith, community, law enforcement and political leaders rejected intolerance and bigotry and committed themselves to work against racism and anti muslim bigotry.

The event was a regional convention hosted by the Delaware Council on Global and Muslim Affairs on the issue of Social Justice and Political Activism on December 5th. The Delaware Council is a community-based think-tank that seeks to mainstream American Muslims, combat intolerance, prejudice, hatred, and work for social justice in Delaware. It has become the most influential and most mainstream Muslim organization in Delaware. Hundreds of Muslims and non-Muslims from Delaware, Pennsylvania, New Jersey and Maryland came together to discuss how they could engage the political system in order to work for social justice.

The conference focused on three key issues – 3 Ps — under the rubric of social justice – prejudice, poverty and police. Scores of political activists shared their experience in political activism. How to organize and mobilize to defend your rights, to engage political leaders to bring about policy changes and how to develop grass roots institutions was on the agenda.

The conference was held under the shadow of the San Bernardino shooting and there was palpable tension in the air. But the most remarkable element of the conference was the way the leadership in Delaware reached out to Muslims and assured them that at least in Delaware they were welcome, valued and their contribution to society was recognized.

Speaking on the interfaith panel, Rabbi Douglas Krantz, a co-founder of J-Street, set the tone by declaring that a Sabbath can be broken only to save lives, and he had broken his Sabbath that day to “stand up with Muslims against Islamophobia” for he believed that “it was indeed a matter of lives”. This statement of interfaith solidarity resonated very powerfully with all participants at the convention.

Tom Gordon the County Executive for Delaware’s biggest county, New Castle, and Police Chief Col. Elmer Setting assured the crowd that they will not only provide security to places of worship but will also prosecute hate crimes to the fullest extent of the law. They specially encouraged hijab wearing Muslim women to come forward if they feel that they have been targeted by anyone. Harpreet Singh Mocha, the director of community relations for the area representing the Department of Justice, explained the legal issues involved in interpreting and reporting hate crimes and anti Muslim bigotry. This panel has had a very positive impact on Muslims in the area. They feel safer and are convinced that the rhetoric of people like Donald Trump is an aberration rather than the norm in America.

The final plenary session began with a keynote address by Governor Jack Markell. Governor Markell delivered a passionate and eloquent condemnation of prejudice and intolerance. He argued for acceptance of Syrian refugees, and celebration of Muslim contributions in America. He quoted from the Quran to underscore that most Muslims were peaceful and hardworking Americans and most importantly he reminded us “We are not a country that turns people away”. Many Muslims in the audience were deeply moved by this sentiment and many of them told me that he had made them feel proud to be an American.

Senator Thomas Carper made a very emotional address reminding the audience of the tragedy of Japanese internment and insisting that we have learned our lessons and we will not repeat that mistake again. He explained, invoking the Bible, to how it was our “moral obligation to help strangers in our land”. He also made the point that we need to eschew the false dichotomy of security and openness. He insisted that we can do both.

Congressman John Carney touched upon the issue of crime and policing in the most vulnerable communities in Wilmington. Crimes, drugs and violence and how the police deal with it is an area of great concern for us in Delaware, he argued. Clearly he feels that there has to be a fundamental change in the philosophy of policing. He speculated on the possibility of more community involvement and more predictive policing. It was evident that he was touching upon a theme that might be a cornerstone of his gubernatorial campaign. Delaware Council has an important constituency in Wilmington and is eager to further engage with him on this important challenge.

There were many more inspirational presentations, including a moving video message from Senator Chris Coons, but they cannot all be summarized here. Nevertheless they made the convention a historical landmark that showed how Delawarean Muslims care about their country and are making important contributions to make it a better place. It also helped Muslims understand that while there are bigots like Donald Trump and Ted Cruz in America, there are also generous statesmen like Jack Markell, Thomas Carper, Chris Coons, John Carney, Tom Gordon and Bryan Townsend in America. And guess what, the good guys far outnumber the hate mongers.

Dr. Muqtedar Khan is Associate Professor in the Department of Political Science and International Relations at the University of Delaware. He earned his Ph.D. in International Relations, Political Philosophy, and Islamic Political Thought, from Georgetown University in May 2000. He founded the Islamic Studies Program at the University of Delaware and was its first Director from 2007-2010. Dr. Khan is a Fellow with the Institute for Social Policy and Understanding.

Disclaimer: The viewpoints expressed in op-eds do not necessarily reflect the opinions, viewpoints and official policies of Muslimmatters.

As Muslim Women Who Wear Hijab, We Want To Inform You, “You Are Not Our Voice”