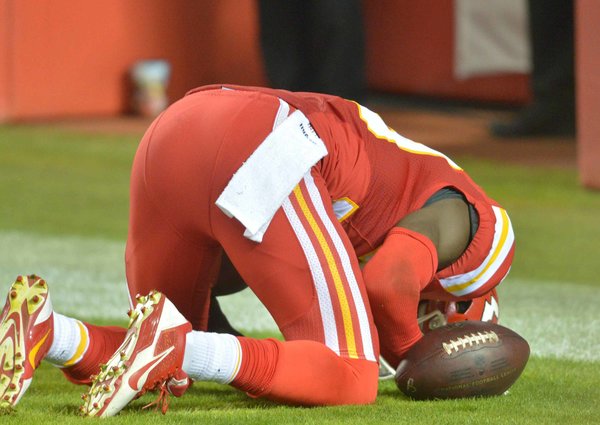 Somehow, some way, a scene that has played out over a thousand Friday nights in thousands of towns across the United States has recently become a source of national controversy centered in a small Navy-base town in Washington state.

Last month, the Bremerton (Wash.) School District placed Joe Kennedy, an assistant football coach at Bremerton High School and a devout Christian, on paid administrative leave for ignoring its orders to stop leading a group prayer on the field after BHS games, something the coach had been doing since 2008. As detailed in The Seattle Times:

The district said it was bound by “lawful and constitutionally-required directives” about public religious displays and outlined several Supreme Court rulings backing the district’s actions. Among them was a 2000 decision that found a Santa Fe, N.M., school violated the First Amendment’s Establishment Clause when it allowed its facilities to be used for religious expression during a district-sponsored football game.

“While attending games may be voluntary for most students, students required to be present by virtue of their participation in football or cheerleading will necessarily suffer a degree of coercion to participate in religious activity when their coaches lead or endorse it,” the district said in the letter.

The district said that Kennedy would remain employed by the district for the term of his contract as the junior-varsity coach and assistant varsity coach but would not be allowed to participate “in any capacity” in the football program unless he agreed to comply with district directives.

Living in Seattle, I have seen this story develop from brief mentions in the local media to a topic of national debate.

Major media outlets like CNN and FOX News have covered the Bremerton story, with 2016 U.S. presidential candidates Dr. Ben Carson and Donald Trump among those weighing in with their opinion. About three dozen members of Congress have sent letters of support for Kennedy, while other politicians and public figures have supported the school district’s decision.

At the first BHS football game since Kennedy was punished, a group of self-proclaimed Satanists showed up — “in the spirit of free expression,” according to Seattle Times reporter Christine Clarridge — and were confronted by students who chanted “Jesus” and invited them to leave.

Coach Kennedy was also at that game, watching from the stands among a mostly supportive crowd, and he reportedly (and defiantly) prayed after his team’s 27-20 victory over Sequim HS; but he did it from the bleachers, not on the field. His lawyer is talking about filing discrimination charges against the school district.

The high school football season in the state of Washington has but a few more weeks left, but this story is far from over. It has resonated across religious, political and sports communities because, beyond the legal and constitutional issues at play, at the heart of it are a couple of personal, moral questions:

How do you feel about praying and other forms of religious expressions in the arena of sports?

How do you feel about the government denying a citizen’s freedom of religious expression when it has not been proven that their form of expression infringes upon other citizens’ freedom from religious imposition?

Sports and religion are crossing paths all over the world.

NFL players drop to one knee and pray after scoring touchdowns. Pro soccer players place their foreheads to theground in prostration to Allah

Major League Baseball batters make the symbol of the cross before stepping up to the plate. Pitchers clutch crosses on the end of necklaces and point to the sky after strikeouts.

, and angel wings in elaborate tattoos made visible by their uniform tank-top jerseys and shorts.

Boxers and NASCAR drivers pray before putting their lives on the line for their sport, then thank The Almighty (win or lose) after they’ve survived another dangerous, breathtaking battle.

Many of us have cheered for David Robinson and Kareem Abdul-Jabbar and Sandy Koufax. Others have jeered Tim Tebow and Mahmoud Abdul-Rauf and the University of Notre Dame football team with their “Touchdown Jesus” mural.

And, unfortunately, we’ve also heard of too many cases in which athletes have been punished and discriminated against due to their religion, such as the ongoing issue of FIBA (basketball’s international governing body) banning players from wearing traditional religious headgear — Islamic hijab headscarves, Sikh turbans, Jewish yarmulkes, etc. — on the court.

Is that what is happening in Bremerton? Is a high school football coach being punished and discriminated against due to his religion? 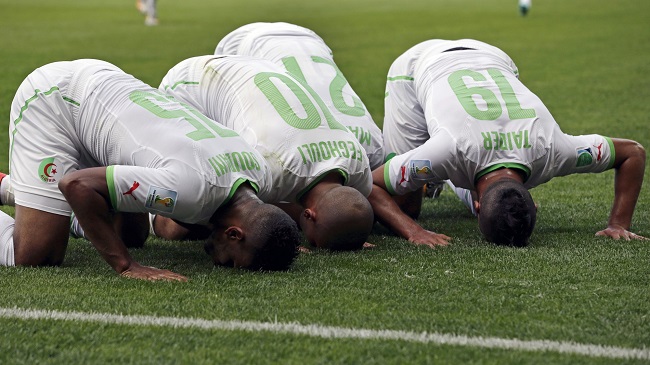 Members of the Algerian national team pray during the 2014 World Cup.

Before I was religious, I was a football player.

I played organized football from the time I was eight years old until the end of high school, and during that formative decade in which I was constantly exploring my spiritual side — going to Sunday school at my great-grandparents’ Baptist church at age 8, discovering Malcolm X at the Nation of Islam at age 10, deciding to accept Islam and then balking at 13, revisiting Christianity and thinking about being “saved” at 15, weighing the importance of attending a religion-based college at 18, and at times in between not sure if I even believed in God at all — I had no problem accepting the presence of prayer in the sport. I don’t specifically remember any of my Little League coaches leading prayers on the field or talking to us about God and Jesus, but I do remember that when my high school coaches did, it was not an unfamiliar feeling.

Of course these were always Christian prayers. This was America, a majority-Christian country, and football is America’s pastime. What else would you expect? I remember phrases like “Jesus Christ our Lord” and quotes from the Bible permeating the football field and the locker room.

Even if some of those pre- and post-game prayers were intentionally vague depending on the cultural sensitivity of the person leading them, none would ever be mistaken for the prayers of another religion.

This didn’t really bother me, though. I was raised in a Christian household by a Christian family, so even though I may not have personally considered myself a Christian kid, bowing my head and praying along with the group was not an uncomfortable experience, whether it was on the football field or at the dinner table. Even today, as an adult Muslim whose family is still mostly Christian, I have bowed my head in prayer alongside Christians and people of other faiths.

The Bremerton School District’s ruling, however, was not necessarily made to protect kids like me, who could go along to get along without feeling too conflicted.

The district is stopping Coach Kennedy’s public prayer (I believe) because there are kids who do practice other religions, or choose not to practice any religion, who may feel pressured into participating in Kennedy’s prayer because all of the other football players or cheerleaders are doing it and the coach is leading it. And because this is a public school event, Coach Kennedy doesn’t have the same freedom to express his religion that he would have if he coached at a private school.

So in that sense, I understand the district’s actions. But I don’t fully agree with them.

Just as a person should not be coerced or pressured into taking part in religion (“There shall be no compulsion in [acceptance of] the religion. The right course has become clear from the wrong. So whoever disbelieves in Taghut and believes in Allah has grasped the most trustworthy handhold with no break in it. And Allah is Hearing and Knowing.” — Quran 2:256), no person should be prevented from taking part in a harmless expression of religion that is their choice.

There are reasons why so many people in our society believe in and stand strong for the “separation of church and state.” And many of those reasons are good and sensible. But there is a time when we must explore the spirit of law versus the letter of law and use our reasoning to determine when one trumps the other.

No matter how you feel about religion or religious people, I don’t see how you could argue that prayer is a bad thing or a harmful act to participants or non-participants. As forms of religious expression go, prayer is typically the most personal, the most quiet, and the most accommodating to anyone else in the vicinity.

Take away the religious element of it, and prayer actually involves many of the traits and behaviors that believing and non-believing parents would like their children to have.

Prayer is showing gratitude and grace.

It is saying “please” and “thank you.”

It is showing humility and respecting authority.

It is being thoughtful and considerate of others.

It is admitting mistakes and striving to be better.

In reading the opening lines of the Holy Quran (1:1-7), part of a prayer that Muslims around the world recite five times every day, much of this is evident:

I see praying — the way most people do it — to be no more publicly obnoxious than reading. So while I don’t think anyone should be forced to read a book in public, I also don’t think we need to stop people who are reading books in public.

Another question that comes up often in discussing the Bremerton story is one of selective morality. Would the number people who are fighting so vehemently in support of Coach Kennedy be the same if he were a Muslim leading an Islamic prayer?

Unfortunately, in this neck of the woods, we know the answer to that question. But that is another issue for another day.

One more common question: What if it was your kid who was not Christian, or simply did not want to pray after a football game, but his coach was leading all of their teammates and some of their classmates in a Christian prayer?

Personally, I would hope that my kid would have the stretch and awareness, which I learned from my parents, to recognize peer-pressure situations and be true to themselves. I would hope my kid makes a right decision that they are comfortable with, rather than having the decision taken away from them.

And I would hope that while my kid understands that it is wrong to make someone pray who doesn’t want to, but there is nothing wrong with allowing someone who does want to a space to pray.

Depression & Muslims: 7 Stats That Will Shock You

How Can NewlyWeds Avoid the Pitfalls of Marriage? | Haleh Banani