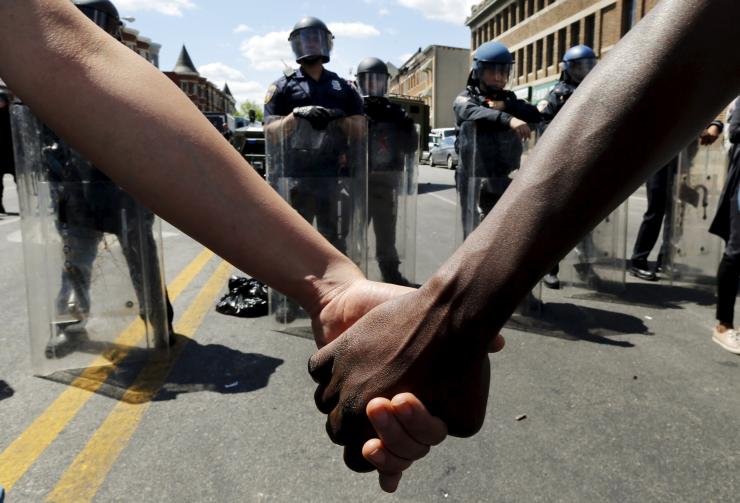 By Mikaeel Ahmed Smith
What we have witnessed this past week in the city of Baltimore has caused many Americans to re-analyze the current state and condition of the inner-city standard of life and how that standard is viewed by fellow Americans. Questions have arose regarding the ever-growing gap between those living below the poverty line and the affluent. Questions regarding the educational standards set by local governments in inner cities, as well as those regarding racism in general. Equally important, many have begun to question the role that mainstream media plays in influencing the opinions of most Americans. Many of whom are often completely oblivious to realities on the ground, who swallow the stories given to them “hook, line and sinker.”

Poverty, education, media misrepresentation, and racism are the issues that inner-city Baltimore residents are protesting about. The police brutality and specifically the killing of Freddie Grey are part of a national problem, which has spun out of control in the last 4-10 years.

We are all aware of the natural racist tendencies that can arise due to ignorance among a people. America itself is no stranger to racism. In fact, the annuals of history are full of American legislated racist policies. Many of which in southern states of America are actually still in the books of law. Much of the police brutality we have seen in the recent years has been construed as a continuation of that racist tendency. As true as this may be, Baltimore is quite different and has led many to question this narrative. Simply because Baltimore is a city in which a large number of the leading officials are in fact African American. The citizens of Baltimore themselves say, “it is not racism that we are fed up with, rather wide spread corruption.”[1] In order to understand the situation from their perspective we must look historically at how slaves where controlled in America. Black African slaves were not only watched and monitored by white slave owners, but rather Black Privileged slaves were used to keep the rest of the slaves in line. Needless to say, the regular slaves despised the black masters even more so than their white masters.

Who Creates a Slum?

Baltimore has a deep history of government policies, which have shaped its slums and inner city into what it is today. Even Wells Fargo has blood on their hands. Wells Fargo agreed to pay millions of dollars to Baltimore and its residents to settle a landmark lawsuit brought by the city claiming the bank unfairly steered minorities who wanted to own homes into subprime mortgages. Before that was the deindustrialization of Baltimore, resulting in mass job losses. The outrage of Baltimore youth is not only due to the unjust killing of Freddie Grey, but rather the culmination of these problems and frustrations. Freddie’s death was merely the straw that broke the camels back.

In a rally that I attended the day after the riots, Baltimore residents gathered both young and old along with over 100 clergy of different faiths to discuss or vent their frustration. A common message voiced many times over, was the extremely poor standard of education in the public schools of Baltimore. Not only the quality of education but also the condition of the schools themselves. High school drop-out rates in the inner-city have reached epidemically high.

Many Americans were extremely upset with the way in which the media covered the entire situation. And have again come to the realization that media often has their own agenda, and the language they use to frame a story can have many implication. The usage of the word “thug” to describe the rioters has been challenge strongly. Those opposed to the usage of this word claim that its usage stops others from looking to the deeper reasons why these people are rioting and upset. It encourages a form of mental lethargy by prohibiting others from asking the question, “why are these people upset?” I commend the swiftness with which this attempt of mental framing through language was resisted and contended.

Although the tension has subsided emotions and feeling in the city remain agitated, the indictment of the officers who killed Freddie unjustly has quelled the people for now but if our assessment is accurate, we will witness many more of these situations of unrest until the primary problems are solved.

Muslims are the new niggers of America. They can no longer live in post September 11th America behind their money in nice suburban bubbles. They are forced to go through the passage of rights that all American minorities went through. So what must Muslims do? How will they gain civil or human rights that other minorities are also fighting for?  Perhaps first by recognition that they are not white America. Secondly, by appreciation of the struggles of those who came before them. The status of elder African American Muslims in our Muslim American communities should be like that of the Companions of Badr’s status to the other companions. They deserve a degree of respect simply due to the struggles they made. Struggles that have been made by indigenous Muslims made it easier for our immigrant Muslims. Unfortunately, most African American Muslims feel extremely disenfranchised in our masjid and community centers due to a number of factors which lie out of the scope of this article. I can only hope that we realize the importance in building bridges and joining hands with those who share our common values and objectives.

[1] As per a recent rally held at Empowerment temple, held the day after the riots.

The Luckiest Muslims in America

Western Europe and the Ottoman Empire: Trade Across an Inverted Imperial Divide