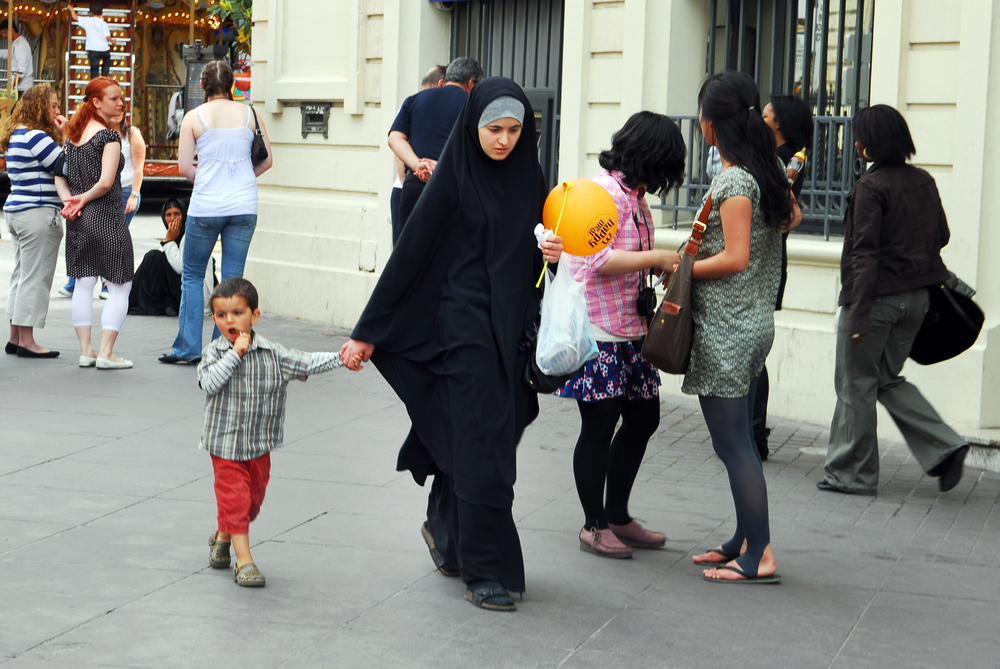 The Charlie Hebdo and anti-Semitic terrorist attacks in France have propelled the French culture wars back into action.  Old but re-vivified identity debates abound as pro-integration forces rally their troops in defense of “laïcité” (read: separation of Church and State). And once again, French Muslims – indeed Muslims world-wide – find themselves placed under a cultural microscope.  Like clockwork, Marine Le Pen, leader of the far right party, the Front National (FN), seized the opportunity to use Islam as the wedge issue to advance her vigorous, anti-immigration platform within France.  Now, from the Élysée Palace to the streets of Paris, the French seem to be united more than ever behind the common chants of “laïcité!” and “Je suis Charlie!” These two phrases are becoming synonymous.

But these cries for laïcité in the aftermath of the most important terrorist attack in recent French history are misplaced. In fact they are illogical. Why? Because it doesn’t make any sense to connect the Charlie Hebdo attacks or artwork (if one wants to call it that) to the idea of laïcité; free speech and laïcité do not mean the same thing – in France or anywhere else. Something has been lost in translation, not just between France and the rest of the world, but also within France and among the French themselves. It’s almost as if the French, gripped by fear and the sudden realization that this is real, have lost historical consciousness.

But, let’s be clear on what we are talking about. France has had more than its share of identity crises and has consequently wallowed in much political chaos during the past 200 years, with some 17 different constitutions/re-writes, 5 republics, 2 empires (Emperor Napoleon Bonaparte and Emperor Napoleon III), and a couple of restorations thrown in to boot. During the fabled and often unexamined Third Republic, which lasted from 1870 to 1940 (and ended by the Nazi Occupation and Vichy’s collaborationist government), France formulated what came to be known as its laïcité laws culminating in its now oft-cited 1905 laws of separation. The 1905 laws were anti-Clerical and severed the educational ties between the Catholic Church and French state. The Vatican, however, denounced these laws, ordered Catholics not to comply, and excommunicated the French deputies who voted for them.

France’s current republic (the Fifth Republic) was initiated during a military coup d’état emanating from the French generals stationed in Algiers who were embroiled in a long, blood-soaked war to suppress Algerian nationalists (which the French lost). These French generals in Algeria, who had already taken control of the French administration in Algiers, threatened that if Charles de Gaulle were not put in high office, they would unleash the French paratroopers on France to seize control of the French metropolitan government. And the generals were not bluffing. Inconceivable to Canadians, Americans, the British, and most Western countries after 1945, this is exactly what the French did, and this is how de Gaulle became president of France in 1958. But the point here is that Article 1 of the French constitution of 1958 enshrines the concept of laïcité in this way: “La France est une République indivisible, laïque, démocratique et sociale” (France is an indivisible secular, democratic, and social Republic.) After nearly 200 years of struggle to resolve this issue, France and the Church had finally come to terms with laïcité. But, just as the dust settled on the long anti-Clerical debate, laïcité resurfaced with a vengeance.

The match that re-ignited the laïcité fire was struck by the “Head Scarf Affair,” when in September 1989, three French Muslim girls were expelled from a middle school in the northern city of Criel for refusing to remove their “hijab” (Muslim head scarf). By 1989, France had serious immigration problems in part because most of its nearly 5 million Muslims who had origins in North Africa (Algeria, Morocco, and Tunisia) were living in overcrowded housing areas (banlieues) created in the 1960s and 70s. A product of 19th Century urban planners, they were akin to the “projects” and were built to accommodate a growing immigrant population. The many unofficial and illegal shantytowns that peppered the urban landscape in Paris, Lyon, and Marseille were destroyed by the French, and their inhabitants – the migrants and immigrants – were transferred to the banlieues.

Immigrants were initially welcomed because France needed cheap labor to fuel its post-1945 economic boom. However, after the 1973 oil embargo, France halted immigration from North Africa and then tried to reverse the demographic trends by repatriating North Africans.  Repatriation failed, and conditions within the banlieues quickly deteriorated. Crime, poverty, insufficient public transportation, inadequate schools, and complex social problems took hold. And, because of the ethnic look of the neighborhoods, and the fact that the neighborhoods had been separated – by design – from urban centers, many French commentators, especially on the extreme right, began to fear the rise of communitarianism.

In the 1970s and 1980s, fears of communitarianism (ethnic based politics and society) increased exponentially. By this time, the second generation of North Africans (known as “Beur”) had emerged from these banlieues and were active on the political stage. The word Beur was originally a self-identifying one created by these younger North Africans in order to cast off the more pejorative identifier, “Arab.” The Beurs wanted France to address discrimination, racism, but above all, they wanted to have access to the same possibility of socio-economic upward mobility that their Gallic compatriots enjoyed. Many of these Beur were in fact more in tune with French society and secularism than their parents were, but they lagged far behind their non-immigrant peers on key indicators such as education, class, and jobs.

The Head Scarf Affair wove the various threads of identity politics in France – concern over communitarianism and immigration, and anxiety about Islam’s perceived inability to integrate into French national values – into a tapestry of actions by the French State intended to hold firm on laïcité.  By the end of 1989, the French Minister of Education, Lionel Jospin, skirted the issue with a vague statement giving each educator the right to rule on Islamic head scarves as s/he saw fit.  Finally, in 2004, under the Chirac government, the French passed a definitive ban on the wearing of all “ostentatious” religious articles (for Muslims, Christians, Jews, and others).

As for the issue of free speech, it must be remembered that the French do not have something like the First Amendment. In fact, the French legal system does not brook total freedom of speech. For example, through a series recent legal actions (starting in 1990), French law now places limits on speech involving racism, sexism, anti-Semitism, Holocaust denial, anti-gay remarks, and more recently, the advocacy of terrorism. This factors into sentencing in cases of violence and can in themselves trigger prosecution and jail-time.  And, it should be remembered that throughout history, the various French governments have often placed great limits on free speech, causing, at times, great writers like Victor Hugo to flee France and live for decades in exile for his criticisms of Napoleon III. Even the Fifth Republic censored the press repeatedly during the French-Algerian War (1954-62). The most famous example is a book about torture republished as a new English edition in 2006, The Question, by the late Henri Alleg. Alleg’s book was banned by the French state after it was published in 1958.  Even the Academy Award nominated The Battle of Algiers (1965), the famous film about the French-Algerian War directed by the Italian Gilles Pontecorvo, was banned in France until 1971. In other words, the Fifth Republic has often had censorship and does not have what Americans would call free speech in a legally protected sense.

So why have many of the French commentators in the post-Charlie Hebdo moment insisted on defending free speech (the right to depict the Prophet Mohammed or anyone or anything else) with statements that inevitably evoke this issue of laïcité? Why are they conflating laïcité (separation of Church and state) with free speech? To answer that, I’d like to turn to a point made by renowned French scholar of Islam, Oliver Roy. As he put it in Secularism Confronts Islam (2007): “In particular, the debate on laïcité, now as in 1905, makes it possible to obscure the social question: if the banlieue is primarily a problem of Islam, then there is no social problem. This is, in fact, an old tradition of French social democracy: to use laïcité to evade a debate on the economy.” Thus, by conflating the discussions about Charlie Hebdo with the issue of laïcité, the French are once again evading the tougher debate about how to address the problems of the distressed banlieue.

Coming at a time when the French are seeking to address the root causes for radicalization within France, this age-old evasive thinking will only serve to further alienate the restless and alienated young Muslim populations who might be prey to these ‘jihadi’ [Ed. This term historically surfaces from the Indo-Pakistan conflict] groups now recruiting for al Qaeda and ISIS within France. This is why French Prime Minister Manuel Valls’s recent correction to all this is so important. Rather than fall into the trap of the same old laïcité debates, Valls re-iterated the statements he made in 2005 (during a period of severe unrest and rioting within the banlieues) that the French suffer from “territorial, economic, and ethnic apartheid,” and that France must come to terms with the nature of its crisis. Valls’s approach, which is to recognize the nature of the separation between the banlieues and the rest of France, is a significant step in the right direction. I say this because after decades of studying radicalism and terrorism in France and elsewhere, it is clear that the most common factor connecting all the young ‘jihadi’ recruits is alienation, and this alienation has important socio-economic roots that cannot be ignored by simply focusing on ideas and identity debates. And, if the French continue to avoid the tough debate and to hit the theme of laïcité in these public discussions, France can expect even greater problems with its young alienated Muslims in the banlieues.

That much is certain.

James D. Le Sueur, one of the leading American scholars of decolonization. He is a professor of History at the University of Nebraska, Lincoln, and Senior Associate Member of the Middle East Centre at St. Antony’s College, Oxford and the author of several books on France and Algeria. This article is based on a talk given on Jan. 22 at the National Press Club in Washington, DC at an event called: “Muslims Respond to Charlie Hebdo: Roots of Radicalization.”

Sponsored: Achieve Your New Year Resolution of Buying a Home