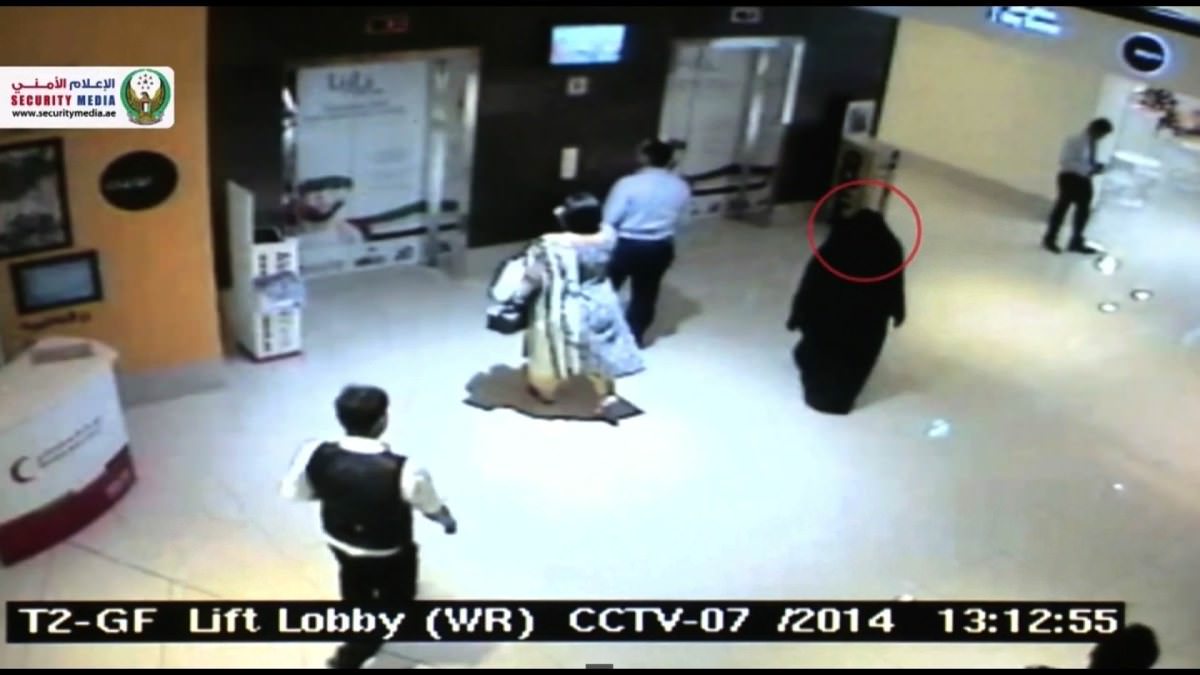 CCTV of the attacker fleeing the mall after the fatal stabbing of Ibolya Ryan.

On Monday, December 1st 2014, something terrible happened. Ibolya Ryan, an American teacher and mother of two, was stabbed to death in the ladies restroom of an Abu Dhabi mall. Surveillance video shows the attacker entering the mall, walking into the bathroom, and a few minutes later, running out of the mall with eye-witnesses in pursuit. The attacker was wearing an abaya, niqab, and gloves, and escaped through the same mall entrance from which they had entered.

By Wednesday, Dec 3rd, the Abu Dhabi police had released surveillance video of the attacker, and by December 4th, the suspect had been caught. The criminal case of the niqab-wearing killer may soon come to a close, but the media case against niqab is far from over.

Banned in France and debated worldwide, the niqab has become the Muslim world’s most instantly recognizable and controversial fashion statement. While the religious opinions about it vary, the matter remains that a large number of Muslims believe it is their right to wear a niqab regardless of whether it’s an obligation, and here is where modesty and security collide. Or do they?

The Slippery Slope of “Gender Unknown”

A casual slippery slope argument implies that if you let one thing happen, it will inevitably cause a series of events that probably won’t be pleasant. It’s like how your auntie once said that you if keep crossing your eyes they’ll get stuck that way and then no one will ever marry you.

When it comes to niqab, the media version of this is:

If we can’t tell what gender a person is by looking at them, THEY COULD BE A TERRORIST AND THEN THERE WILL BE JIHAD AND YOU WILL BE MURDERED IN YOUR SLEEP. 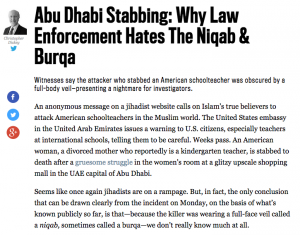 Granted, some of these arguments involve slightly less capslock and slightly more tact, but the gist is that women who wear niqab might not be women. They could be men pretending to be women, who are actually (ominous music here) jihadists.

Or, they could be hiding their faces because they are lady jihadists. Jihadistas, if you will. One way or the other, we are supposed to accept that the inability to confirm a person’s gender and identity by their face alone is apparently an affront to national security. And, as Christopher Dickey of The Daily Beast wrote just two days after the killing, this presented a “nightmare for investigators.”

If the Abu Dhabi Police had a nightmare catching the Reem Island Ghost, it must not have been a very scary one.  The attacker was apprehended within three days using the same CCTV that recorded her fleeing the scene of the crime, with such high-tech, non-face related tactics as checking parking lot cameras, following her movement to her car, and then tracking the car back to her house. 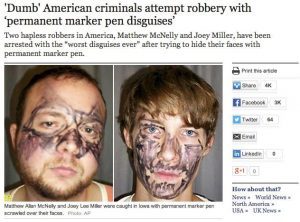 The police don’t get this lucky every day, ok?

Criminals are seldom thoughtful enough to pass within a few feet of CCTV cameras with their faces uncovered as a courtesy to investigators, so most crime isn’t actually caught on tape and doesn’t have eyewitnesses.  That is why police rely on such wizardry as fingerprints, forensic evidence, and good old-fashioned investigation.  That means that not being able to see the Reem Island Ghost’s face – whether because it was covered in niqab or because the video quality was poor, would not have hamstrung the police’s investigation.

Conversely, being able to clearly see the attacker’s face wouldn’t have freed investigators from having to do any real investigating, either.   Unless the attacker happened to be family, friend, or neighbour of the investigator reviewing the tape, they wouldn’t have been able to ID her from sight alone. Further research would be necessary to put a name to the face before they would be able to say “Look, it’s Dalal Al-Hashemi! I always knew she was two khubuz short of a shawarma platter, let’s get her!”

Yes, she was a she. Sorry internet, I know you’re a little disappointed.  You knew it was coming though, because in local news stories following the attack, eye witnesses reported hearing an argument “between two women.”

In spite of this information, the news was spun to include ambiguity about gender, but given that the line between genders is enthusiastically blurred in the Western World in the name of arts, rights, and freedom, it’s beyond hypocritical for people in these same countries to point at Muslim women in mock fear and cry, “We can’t let women dress like this! How do we know they’re not really men!” 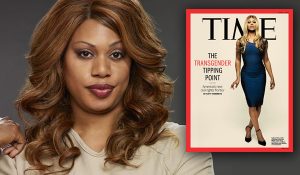 And this man is the transgendered woman Laverne Cox. Since you can’t tell from looking at him/her immediately, he/she is a threat to national security?

Had the attacker not been wearing niqab, would international news agencies still be calling it a case of gender unknown? After all, a man wearing only a hijab could easily have made himself look and sound like a woman if he had intended to deliberately infiltrate a women’s bathroom. But in countries across the world he could’ve done it in stilettos and a mini-dress as well, and would probably have the calves for it too.

Murder happens, people die, and it’s nothing less than tragedy.  Unless the person killed is of international recognition or familiarity though, it’s not usually newsworthy.Would this attack have made the international media rounds if the attacker hadn’t been wearing a niqab? I supposed that’s a difficult question to answer, so here’s another one.   Are there any other international news stories this week where an otherwise unknown woman was killed by an unknown attacker for an unknown motive?

All squirrels die. Socrates died. Therefore, Socrates was a squirrel. 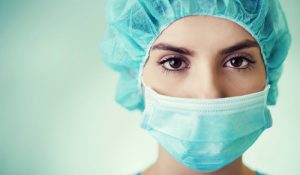 “Is this the new face of modern medical terrorism? Muslim women permitted to cover their faces in public health institutions are a threat to national security and- oh wait, she’s a doctor? Sorry. Nevermind.

Take, for example- a surgeon. Everyone understands why a surgeon covers their face. Unless you haven’t caught up on germ theory, you know that people have germs and germs make other people sick. Furthermore, people who are cut open are particularly vulnerable to said germs, and that is why surgical masks in hospitals are not up for debate.  Yes, wearing a mask does make it easy for someone to infiltrate the hospital and pretend to be a surgeon and who knows what sort of evil they can get up to, but we can confirm identities and ensure security without banning medical face-coverings because we are creative and smart and not Surgeonophobic.

Motorcyclists- especially the non-pureed variety- cover their entire heads, and while thousands of crimes are committed by fast-moving motorcyclists with unknown and impact-protected identities, helmets are not considered a threat to security. They’re actually a legal requirement.  The point I’m trying to make is that allowing someone to cover their face doesn’t actually threaten national security unless we allow them to evade identification, and identification can be confirmed very simply by asking the wearer of the helmet or niqab to show their face when requested by an appropriate authority when confirmation of identity is required.  Once identification is confirmed, they are then free to flip their visor – or veil – back down, and be on their merry, non-threatening way. 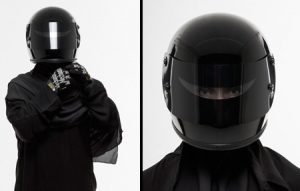 Motorcycle safety and Islamic modesty rolled into one from Deathspraycustom.com

In the event that crime is committed by a person of unknown identity wearing a motorcycle helmet, police would have to do the same thing they did in the Reem Island case – investigate.

Where there’s a will…

France has over 5 million Muslims, but fewer than 2,000 of them are estimated to wear a niqab. The Netherlands tried banning it in 2005 and 2010 although less than a hundred women cover their faces in the entire country. Compare this to the Middle East, where niqab is a norm, not an exception – and you have to wonder why the law enforcement officials that regulate hundreds of thousands of women in niqab are not nearly as freaked out as their European counterparts.

The foundation of the Niqab vs National Security argument is based on a flawed premise: that niqab prevents women’s faces from being seen for the purpose of identification.  If the niqab were permanently affixed, or women adamant about not uncovering their faces to relevant authorities when requested, they might have a point.  But that’s not the case at all.  Women throughout the Muslim world show their faces to establish their identity, and niqab removal for driver’s licenses, national identification cards, student IDs, etc,  is a non-issue.

While major schools of Islamic thought may exercise a difference of opinion on whether the niqab is obligatory or optional, they all agree it can be removed for legitimate reasons, specifically things like identity and national security.

Law enforcement throughout the Muslim world is able to navigate issues of security without needing to ban the niqab, and that is a point that other governments should take note of. If they say it can’t be done, then they are implying that all of the intelligence, resourcefulness, and technological capabilities of modern law enforcement are apparently no match for a handspan of black chiffon.

Face coverings and security are not mutually exclusive. Both can – and currently do – coexist in regards to surgeons, motorcyclists, firemen, hockey goalies, and people who wrap scarves around their faces in the winter to keep their noses from falling off.  The same coexistence is already present in the Middle East, and all it takes is a female police officer and a screen.  Or a fingerprint scanner.  Or two working brain cells and the willingness to rub them together. 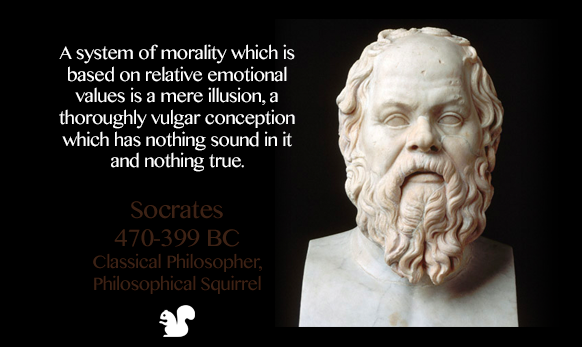 21 Lessons in Leadership from the Prophet | Part 6

My Thoughts on the Junaid Jamshed Controversy