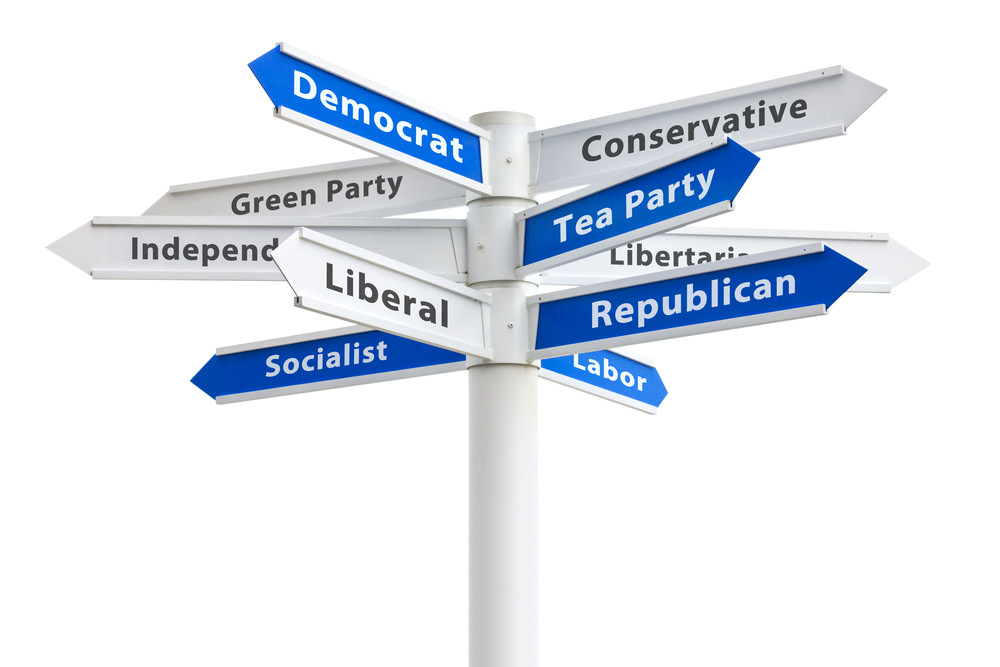 As a result of the Bush years and a neoconservative ideology that disproportionately favored policies curtailing the rights of Muslims domestically and interventionism on the international stage, American Muslims have, for the bulk of the last decade, overwhelmingly affiliated with the Democratic Party. This affiliation came to the forefront in the 2004 Presidential Election when 76% of American Muslims supported John Kerry while only 7% supported President George W. Bush.  Having been a historically Republican voting bloc, the political realignment exhibited by American Muslims was so drastic that John Zogby characterized it as “virtually unprecedented” at the time. American Muslim support for the Democratic Party intensified during the 2008 Presidential Campaign, as 89% of American Muslims voted for then-candidate Barack Obama. Four years later, President Obama’s re-election campaign was widely supported, again, with a nominally lower 85% support from the American Muslim community, a number nearly identical to those who formally affiliated as ideologically liberal.

The Muslim community’s political realignment has not only been evident in the context of presidential elections, but is also on full display vis-à-vis contributions and volunteer hours for liberal democrats, Facebook posting and re-tweeting of liberal politician and pundit statements, along with shifting opinions within the American Muslim community on topics such as gay marriage, evolution, abortion, and related topics. This dynamic is what I have termed “the liberal alliance” which represents the political, social, and ideological commitment to liberalism, which American Muslims have and continue to make en masse.

As of late, political discussions in the American Muslim community have placed this relationship under the microscope, with critics centering on President Obama’s domestic and foreign policies that have, in large part, not been a significant departure from that of his neoconservative predecessor. In fact, a number of his policies have been systemically worse, engendering a bipartisan consensus around issues that were historically viewed as uniquely conservative. Military interventionism, curtailment of domestic freedoms, and protections for Wall Street executives and firms guilty of fiscal malfeasance stand today as the prevailing positions of both Democrats and Republicans alike, with rare exception.

Given this reality, the question begs itself as to what American Muslims should reasonably do – if indeed the best chance for political viability is uncritical support for a party whose platform is virtually identical to its counterparts (at least in regards to core ‘Muslim’ issues such as domestic surveillance, indefinite detention, Guantanamo Bay, interventionism, Israel/Palestine, etc.) then is it really worth participating at all? Should Muslims ‘throw away their vote’ and cast ballots for third-party candidates that have no chance for victory?

Perhaps the first component of this discussion that needs addressing is the simplistic nature of political engagement that has dominated Muslim communities for the better part of the last decade. Though not uniquely Muslim, the tendency to view politics as a blue/red proposition is, without question, problematic. In this framing, Republicans are frequently caricaturized as representing the worst that their party has to offer, whilst Democrats are brandied as ‘pro Muslim’, in seeming ambivalence to said candidates’ public statements and voting record.

Muslims need to realize that the red/blue dichotomy is a false one, and that political debates are little more than theatrics that depend on factors above and beyond substance. Journalists, political pundits, and candidates frequently employ what is termed manufactured outrage by taking a perspective that is nominally different than their opponents but presenting the two sides as being representative of a deep philosophical divide.  The utility in doing so is that it provides the illusion of real debate while implicitly structuring what constitutes politically permissive discourse.

Accordingly, the strictures of permissive political discourse work to marginalize alternative voices as fringe or otherwise eccentric while yielding a citizenry that is largely obedient, a dynamic Chomsky articulated when he said,

The smart way to keep people passive and obedient is to strictly limit the spectrum of acceptable opinion, but allow very lively debate within that spectrum – even encourage the more critical and dissident views. That gives people the sense that there’s free thinking going on, while all the time the presuppositions of the system are being reinforced by the limits put on the range of the debate.”

In addition, American Muslims need to view politicians for who they are – politicians, not friends, family, or community members. Politicians are rarely principled enough to be ‘pro-Muslim’ or ‘anti-Muslim’, rather they are apt to act on that which is politically expedient at a given point in time. The fact that certain members of the Democratic Party and liberal establishment advocate on behalf of Muslim causes has more to do with a shared political adversary than a common moral/ethical paradigm.

This is even more so when it comes to political commenters and satirists.  Yes, there is little question that political commentators and satirists such as Jon Stewart, Stephen Colbert, Rachel Maddow, Chris Hayes, and others serve as proportionately more balanced brokers of political conversation than their right-wing counterparts. That said, even the best pundits are not inherently aligned with mainstream ethical Muslim commitments (and it would be unreasonable to expect them to be such). When Stewart, Colbert, Maddow, Maher, and the many other liberal political commenters portray arguments against gay marriage as ontologically inferior and borne out of an outmoded world of theism run amuck, they critique not only the ‘religious right’, but frankly, the ethical framework outlined in the Qur’an. The secular framework wherein Muslims and fellow co-religionists are cornered into abdicating their theistic commitments in assessing what to advance in the context of positive law is a fickle distinction, one that Noah Feldman terms the “Orthodox Paradox” and Daniel Haqiqatjou wrote extensively on in this post last May.

Perhaps more problematic than the desire to consistently reformulate traditional Islamic commitments to coincide with modern secular liberal sensibilities, is the likely outcome of such a syncretic theology.  If American Muslims persistently recast Islam in light of secular liberal values, how can they expect to fend off the spread of secular liberal movements against theism? Can American Muslims engage in the political milieu of the modern Democratic Party while maintaining the line that they are merely electing ‘the lesser of two evils’ without inhering any of the ideological commitments concomitant with liberalism?

So What Should We Do?

Given the aforementioned challenges, what should be the structure of future engagement?

For one, American Muslims should reconsider the liberal alliance, at least as it is currently constructed.  This means critically addressing the areas of incongruence between liberalism and Islamic Law, as well as engaging in informed discussions concerning the range of contemporary challenges facing civic society beyond the red/blue dichotomy. American Muslim leaders cannot afford to merely parrot red/blue talking points when discussing current events without expecting that same discourse to pervade the congregation. In addition, American Muslims need to prioritize their ethical/moral commitments over the desire for acceptance, understanding that although strategic compromises need to be made in the process of political participation, not every compromise is worth making or representative of a modern ‘Hudaibiyah’ moment.

Secondly, American Muslims need to severely attenuate the current fervor tied to national elections.  There is no act of political participation less meaningful than voting in presidential elections, as the Electoral College renders 90% of the states decided well before the election date.  In a contentious year, three or four states are legitimately in play, whereas in most years the states that may actually swing one way or the other are the one or two which candidates tend to focus their efforts on.  If American Muslims find themselves residing in a swing state, then casting a ballot for president makes sense and assessing candidates electability within ones moral framework should indeed be done, even if that means relenting to the ‘lesser of two evils’.  Otherwise, American Muslims in non-swing states should consider voting for third party candidates or perhaps refraining from casting a presidential ballot.

Cognate to Oppositional Politics is support for issues ‘uniquely Muslim’: Guantanamo Bay, interventionism, drones, Mohamed Soltan, Aafia Siddiqui, global conflicts (Syria, Gaza, etc.), and related areas of concern need to be issues that American Muslims feel no compunction advocating on behalf of.  American Muslims cannot allow intimidation or domestication to curtail their ability to advocate for policies deemed politically inconvenient, even as a beleaguered minority. A platform devoted to remaining within the safe timidity of populist liberal politics whilst circumventing politically contentious topics engenders a political climate of fear and passivity. Organizations that pursue such an approach risk alienating their constituency and losing legitimacy within the American Muslim community.

Lastly, American Muslims should heighten their involvement in local politics. This is not only with respect to elections for local congressional candidates and state government positions (school board, etc.), but with respect to outreach, community engagement, and interfaith programming. Amaanah Refugee Services in Houston, IMAN in Chicago, and ICNA Relief represent successful models of community outreach programs, and interfaith coalitions such as Shoulder-to-Shoulder pioneered by ISNA have demonstrated what can be accomplished when we work with other faith communities to advance areas of shared values. Though it has been emphasized time and again, the imperative to support our local communities cannot be understated, and if we are to have any chance of carving out a dignified future for ourselves and our children, we must ensure that we genuinely care about those around us and wish them good.

In doing so, we pray that Allah allows us to fulfill our covenants to Him, live up to the moral responsibility concomitant with being the Best of Nations, and manifest the injunction to:

Let there be from you a nation inviting to [all that is] good, enjoining what is right and forbidding what is wrong, and those will be the successful.” [3:104]