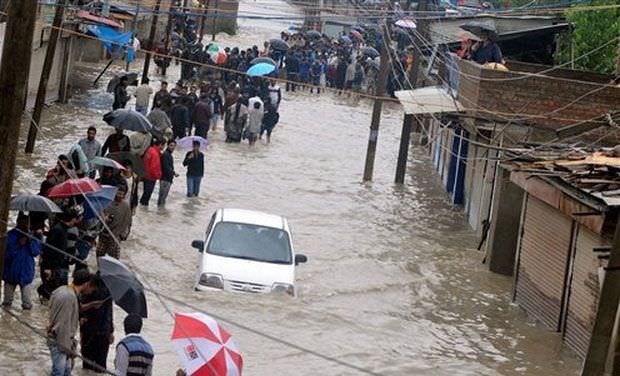 Kashmir is no stranger to natural disasters and from time to time it has had to face the wrath of Mother Nature, be it through earthquakes or floods.

Some years back Kashmir (both Indian Occupied and Pakistan Occupied; henceforth Kashmir will refer to Indian Occupied Kashmir) was devastated by a powerful earthquake which razed to ground cities, towns, and villages, killing thousands of people. A couple of days back another natural disaster, a flood, came to pay a visit, the worst in six decades.

Though both these disasters were natural, human interference played an amplifying role. Had the people stayed within their limits, the damage caused could have been less.

On the evening of September 2nd, Jammu and Kashmir witnessed torrential rains which turned into a flood-like situation as soon as September 3rd. The situation became dire on September 4th; many localities in south Kashmir as well as in the capital city of Srinagar were submerged and needed to be evacuated. By the evening of the 4th circumstances became even worse, leading to loss of life and property in many areas of Kashmir and Jammu. On the 5th, the situation had gotten out of hand; the administration was groping in the dark trying to take charge and praying to Allah for ease. Two of the Valley’s major hospitals had to be evacuated and the Valley’s land connectivity with the rest of the world was washed away (the Jammu Srinagar and Srinagar Muzaffarabad Highways had been closed), many far flung areas were cut off from the rest of Valley.

The rains briefly stopped on the afternoon of September 5th but destruction continued. Landslides became more frequent, killing people and destroying property; the overflowing rivers and streams continued to flood residential areas (rains have resumed since then). Most of the Valley is now also facing a drinking water shortage, as around 500 water supply schemes (stations) have been damaged. Phone connectivity and electricity supply are either shut down or, in areas not as badly hit (mostly North Kashmir), erratic. Radio has proven to be a blessing in these testing times. Since September 4th, Radio Kashmir Srinagar has been running special live programs sharing information about floods, and is acting as a bridge between the people and the authorities.

Calamities do tend to bring the best out in people – with the administration finding it hard to cope with the situation, the people, especially the youth, have taken it upon themselves to provide help wherever needed. Youngsters have used social media to spread information about the flood, coordinated rescue missions, and even provided food to the needy. Some have even kept their cars available for the public, free of cost, for any emergency.

Three days of rains is not unprecedented in Kashmir, it rains and snows here heavily. So then what was different about these rains, that they were able cause havoc and destroy most of the crops (fruits, vegetables, and paddy). 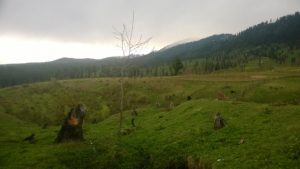 The area around the hill of Sukh–Nag, taken about 4 months ago.

Firstly, it doesn’t usually rain this much in the months of July and August and secondly, the water retaining capacity of the land has greatly been reduced due to deforestation. This time, the majority of damage was done by fast running streams, coming downhill from deforested hills, like Sukh-Nag and Rambyar. The streams were flowing with such ferocity that they uprooted massive walnut and chinar trees along their path! Besides this, what complicated things even more, is the reduced area of water bodies to hold the rain water. Almost all the water bodies be it Dal Lake, Nigeen Lake or Wular Lake, have been encroached upon, and some are even on the verge of extinction.

One might think that these are local issues of Kashmir and do not have any immediate or far-reaching effects, but that is not the case. Whenever the Jehlum, Chinab, or Tawi rivers are flooded, these waters are not restricted to the geographical boundaries of Jammu and Kashmir. They continue to cause destruction far beyond geographical boundaries, effecting millions of lives. These rivers, when flooded, have caused massive damage in Azad Kashmir and even the Punjab province of Pakistan. So it is imperative that people of the region collectively put pressure on the Indian government to take concrete and sustainable steps to safeguard the fragile environment of the region. The Indian government is putting the Valley at risk of a Kedarnath, Uttarakhand-like crisis  – the town suffered extensive destruction during June 2013 from flash floods at a time when thousands of pilgrims were there visiting the Kedarnath Temple. Yet, the government continues to promote unrestricted religious pilgrimages or yatras (people think it is being done to strengthen their occupation) without proper safeguards in place. Studies have shown that the annual Amarnath Yatra has pushed the fragile ecology of the area to the brink. Environmentalists are concerned that the number of people making the pilgrimage is having a negative impact on the area’s ecology and support government regulated limits on the number of pilgrims.

What Can You Do

In addition to contacting the Indian Government, immediate financial assistance is needed in the region. Donations can be made to any international organization that is working in the region. Please avoid donating money to individuals who come to mosques or on the street, unless you are sure about the person. In the past decade people have been collecting money in many European countries in our name, but that money never reaches the people! If you want to donate money, it is your responsibility to verify that the money reaches the people on whose name it has been collected. To the international organizations who are still deciding whether to come to our rescue or not, I would like to tell them that the situation is beyond the local authorities grasp; there is a shortage of boats, tents, and drinking water. There is a need to take steps to stop the spread of water-borne diseases. Above all, we need your prayers.

Iftikhar Ashraf is a Management Professional and Freelance Writer from the town of Sopore in the Baramulla district of Jammu and Kashmir, India. He currently works for the Ride A Cycle Foundation. He wrote this amidst power and internet outages due to the floods. His blog can be found here.