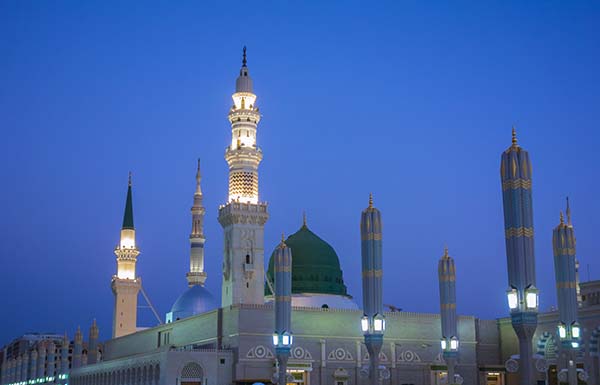 This is Part 2 of the Seerah series, click to read Part 1.

[The following is the video and transcript of Shaykh Yasir Qadhi’s Lectures on seerah. The transcript includes slight modifications for the sake of readability and clarity].

In our last halaqah, we began talking about the khasaa-is, or the specialties of our Prophet Muhammad

and we mentioned about 15 of them and the fact of the matter is that there are closer to 50 special things that only he was given and no other person was given. Today inshā’Allāh ta’ala we will continue talking about his characteristics and his appearances and his mannerisms. And as I told you last week, the purpose of this is to give you a little bit of a taster of the seerah. A little bit of a summary if you like, a bird’s eye view, so we get the summary of who exactly our Prophet

And we will begin today by talking about his physical appearance, how he used to look

. And realize that it is the sunnah of Allāh, it is the custom of Allāh that Allāh

is the most handsome and the most Jamaal of the entire creation, he has the greatest Jamaal of the whole creation. And so they say when he is saying he has been given nisfal husn, or half, (Shatrul Husn is the hadith) half of beauty, some scholars have interpreted this to mean half of his own

And we have many characteristics that have been described, the physical features of our Prophet

. And some of the more beautiful ones are, for example, Ar-Rubayy’ bint Mu’awwidh one of the sahabbiyaat, when her son asked her, “What was the Prophet

like?” this is later on, after he has passed away and she is now an old lady so people are coming to her eagerly, “Describe the Prophet

was happy, his face would light up as if it was the full moon. And it is beautiful that the sahabah are describing the Prophet

with what they know to be the most beautiful, and that is the sun and the moon. So we have one sahabiyyah, she’s saying he is like the sun shining. Another one is saying he is like the full moon. And one of my favorite introductions, to this whole topic, we’re not actually describing him yet, we’re simply saying how the sahabah could not describe him. They couldn’t describe how handsome he was because it was too much for them. And my favorite tradition, wAllāhi it is a tradition; it almost makes you want to cry when you listen to this. And this is the beautiful tradition of ‘Amr ibn al Aas. ‘Amr ibn al Aas is this sahabi, who used to be of the leaders of the Quraysh who were against Islam. ‘Amr ibn al Aas is of the mala’, he’s of the noble men who rejected Islam. He’s like Abu Sufyaan, he’s like Khalid bin Waleed, this category of people who were noble enemies, they weren’t evil enemies.  What I mean by this is you cannot compare them to Abu Lahab, to Abu Jahal, these are the vulgar enemies. There was a group of people, they opposed Islam, but they didn’t stoop to dirty tactics. And the amazing thing by the way, and we’ll talk about this later on, Allāh guided all of them to Islam and this shows that amongst the kufaar, there are two categories: those who have a good heart and because they had a good heart, Khalid ibn Waleed, Ikrimah the son of Abu Jahl, ‘Amr ibn al Aas, Abu Sufyaan, their hearts, they had a mount of good in them, they had nobility, but they opposed Islam and Allāh guided all of them to Islam because Allāh knew there was good in their hearts, whereas the others, they weren’t like this.

So ‘Amr ibn al Aas is of those who converted to Islam very late and he only had the opportunity to be a sahabi, basically for a few years, two years or so, or a little bit more than two. And later on in his life, and he lived a life of political career, he lived a life of grandeur and majesty, he became the wazeer of Muawiyyah, he lived a grand life. ‘Amr ibn al Aas later on would say that there was nothing that was sweeter to me, more beloved to me, than to stare at the face of the Prophet

is so overpowering, his Jamaal, his noor is so great that ‘Amr ibn al Aas is saying there was nothing that I got more peace from, more serenity from, there was nothing sweeter than to simply look at the face of the Prophet

. And he said, “And I could never get enough of looking at him.” I never got tired of looking at him. And yet, were you to ask me how he looked, I couldn’t describe him. Why? He said, “Because along with this desire to stare at him, there was also this awe, this reverence that I had, that couldn’t allow me to just stare directly at him. I’d have to lower my face.” In other words, there are two emotions, if you like, there’s two powers if you like, I don’t like being metaphysical, but there’s two types of types of powers emanating from the Prophet

. The first of them, he’s attracting ‘Amr’s vision to him. And the second is that awe, that overpowering-ness that ‘Amr cannot stare directly. This is Rasul Allāh

. And therefore he’s saying even though I loved to stare, I couldn’t stare. And because of this I’m always battling between these two emotions. I really cannot do justice in describing the Prophet

. It’s a beautiful hadith that shows us, and this is coming from somebody, he is a nobleman of the Quraysh and yet this is how humbled he was just by the appearance, just by the shakal if you like, just by the soorah of the prophet Muhammad