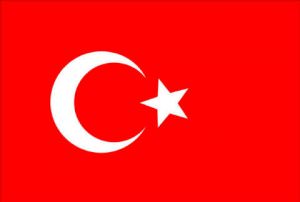 By Yavus Selim
Updated
“What’s going on in Turkey?” is a common question on the lips of people as varied as Joseph Gordon-Levitt and some American Muslim scholars. People are finding it hard to wrap their head around the facts. The most stable, economically successful and popular democratically elected government in the Middle East has been experiencing widespread protests over… a planning application? That doesn’t sound right and of course, it isn’t the case at all.
I do not condone violence against protestors but do want to take a closer look at the why people are gathering in Taksim Square and elsewhere in Turkey.
Here are ten tweets that expose what the current “protests” in Turkey are all about:

Yes. The figures are astronomical but in the last ten years this Turkish government has planted enough trees to repopulate a sizable section of the Amazon. So we can now establish that these protests have nothing to do with the environment at all and they were merely using it as a cover. A cover for what?

For once, Pamela Geller (the well known anti-Islam blogger who stated that she hopes Israel bombs Makkah and Madinah) is right. This isn’t about trees at all. It is about the secular bloc in Turkey making a final anarchic stand against what they hate most in this world – their nation coming closer to Islam once more.

Some of you will say I’m being paranoid. 4 military coups and 1 hanged Prime Minister says I’m not. In fact, a tweet like the one above are hardly surprising when these protesters and their previous iterations treated men and women who were Islamic like scum for more than 60 years. Closing religious schools, banning hijabs and imprisoning members of Islamic organizations are just some of the “freedoms” these protesters miss.

Tweet 4: They support Assad and are supported by him 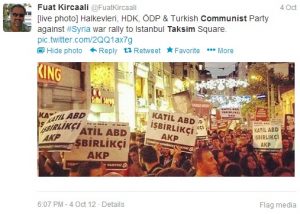 There are numerous tweets showing that a large proportion of the protesters are communists and others who are deeply upset at how unfairly Bashar Assad is being treated by the Turkish government. For them, this is a chance to remove a government that has supported Palestinians, Libyans, Egyptians, Rohingya, Bangladeshis and now the Syrians. They want to go back to their previous government whose only true friend was Israel.

Mustafa Kemal was a well known drunk and died of liver cirrhosis. He was actually quite proud of this fact and referred to himself as “the drunk.” Hence, these protesters refer to themselves as the “children of the drunk.” Meanwhile, Erdogan is pious and a graduate of an Imam Hatip school who has never smelt alcohol. Who would you like to be in charge? The protesters clearly prefer the former. 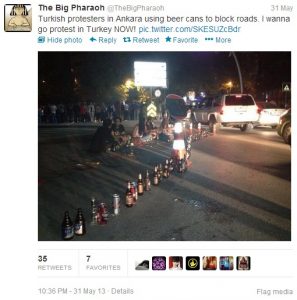 Recent laws introduced by the Turkish government to curb the sale of alcohol (curb, not ban) has got the protesters up in arms. They feel that this is against their freedom completely ignoring the fact that many non-Muslim countries have exactly such rules to prevent the anti-social effect of alcohol such as drunk driving, domestic violence, sexual assaults, disorderly conduct and … blocking roads. By the way, the support being shown to the Turkish protesters by the Egyptian secularists (as exemplified by this tweet) is indicative of their shared goal to prevent the success of any pious government by any means necessary.

Now, I think there are way too many conspiracy theories in the Middle East but the way that a photo from last year’s Istanbul marathon was passed off as a picture of protesters swarming a bridge made me question who was behind it and what motive did they have.

The breathtaking part of all this is that this government has presided over the most successful era in Turkish politics for over 100 years. However, all the successes mean nothing to these protesters who claim that it is audacious to boast about these achievements completely ignoring that the 60 years they were in charge had Turkey’s prestige and power at lower levels than meat in a Donner Kebab.

To even make such a comparison is idiotic at best and immoral at worst. Any objective person would know that this is a completely unjustified comparison given that Mubarak was a corrupt secular military dictator who kept his country poor whilst enriching himself whilst Erdogan is a pious democratically elected Prime Minister who has clashed with the military and has enriched his country. But this doesn’t matter, because in the warped world of the protesters Erdogan is Mubarak, whilst Assad is… just misunderstood. 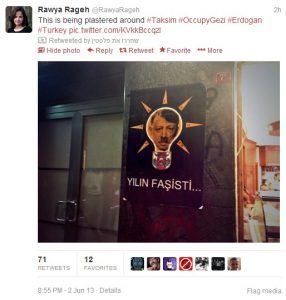 This tweet reminds me of that Will Ferrel Meme… “that escalated quickly!” Apart from the higher than average levels of imprisoning journalists, Erdogan has (almost) successfully brought to an end the war against the Kurds, has forged close ties with all neighbors, has stood on the correct side of revolutions from Egypt to Syria (in most cases the first world leader to do so), has fought to limit the power of the coup-happy army and has got a majority at the ballot box for every election in the last 10 years. And he has spent time in prison for simply reciting a poem. But in the protesters narrative only one thing matters. If you are for Islam – they are against you.
All the above does not mean that I condone violence against protesters. The violence (on both sides) needs to stop and cannot be justified. Erdogan alluded to this himself by stating that a full investigation would be done to see if excessive force has been used assome pictures would suggest. However, given the context in which they take place, the protests in Turkey feel less and less like a protestsand more like an attempted coup against a civilian government.

Many (just like in Egypt, just like in Tunisia, just like elsewhere) will claim that the protests are not against Islam at all but against those who are trying to change society to be more Islamic. To the rest of us, we fail to see the distinction.

The protests in Turkey are not protests at all but an attempt to instigate a coup against a civilian government. They are the last sigh of a secular liberal elite who have realized far too late that the future does not belong to them anymore. The future belongs to Islam.
Continue MM Coverage: An American in Istanbul- making Sense of the Protests in Turkey
Share4.59K
Tweet2
WhatsApp
Reddit10
4.60K Shares

Life Lessons – I Had a Dream! | Shaykh Waleed Basyouni