Residents of Chicago, San Francisco and Washington DC, may have noticed of late that the streets are rife with the call to jihad. No, not a recruitment drive for a blood-thirsty ‘holy war’ that anti-Islam brigades have maliciously associated with the word – rather an interactive, public education campaign aimed at reclaiming the very term and re-attributing it to what it truly represents.

Vibrant posters with the words “My Jihad” alongside smiling, friendly faces and positive messaging plastered across public transport buses, seem to be successfully driving home (pun intended) the message that ‘jihad’ in actuality refers to a concerted effort or struggle, namely by an individual in the path of God.

In December of 2012, Ahmed Rehab, Executive Director of CAIR (Council on American-Islamic Relations) Chicago, had had just about enough when America’s most vicious Islamophobe smeared the New York and San Francisco subway stations with a fresh wave of incendiary adverts against Islam. Having been on the receiving end of one too many a dose of bigotry, this was the last straw for Rehab.

Too beloved a term to be allowed to be hijacked in this fashion, “My Jihad” was launched with the slogan and intent of, “Taking back Islam from Muslim and anti-Muslim extremists alike,” where both Muslims and non-Muslims are encouraged to contribute their reflections of what this spiritual struggle means to them. 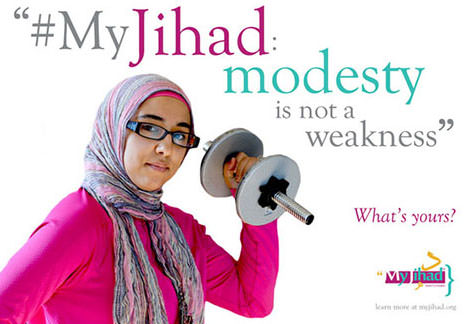 This isn’t merely another short-lived ad campaign. Although sponsoring public ads on buses and trains is one way of contributing, the bulk of interaction and mobilization of support is taking place online.

The modus operandi are many – people are encouraged to rally behind this anti-Islamophobia movement via “My Jihad’s” Facebook, Twitter and YouTube pages, through self-expression either in the submission of photos, posts and videos, or by just spreading the word. Many have already taken on the cause as their own through individually produced/organized media outlets, documentaries, lectures, workshops and even weekend youth retreats. 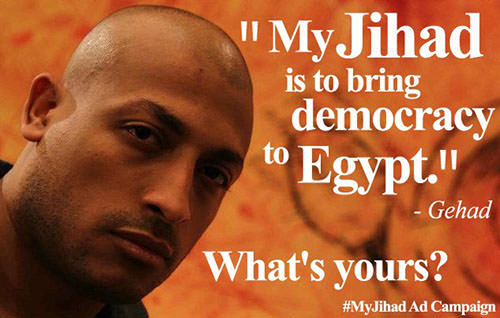 Angie Emara, Project Coordinator of the campaign, explains, “This campaign is about reclaiming our faith and its concepts from extremists, both Muslim and anti-Muslim. The goal is to provide a platform on which the mainstream Muslim’s voice is expressed, sharing the true meaning of jihad as we live it daily, as our reality. ‘MyJihad’ is NOT to negate that fighting oppressors is a valid jihad, but this campaign is about shedding light on the other honourable forms of jihad.  The ‘My’ in ‘MyJihad’ is just as important as the ‘Jihad’ because it is sharing what we believe, what we practice, what we live every day.”

Angie was one of Ahmed’s first respondents, and is involved for the sake of her children’s generation, “We’re tired of having to defend ourselves from associations to no acts of our own doing, and that is especially why I joined – to help create and strengthen a platform on which my kids’ generation can live and practice their beliefs freely and not fear being suspect for things just because of their faith.” 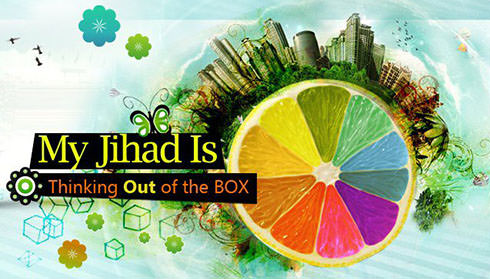 The response to this well-intentioned crusade it seems has been none short of overwhelming. For just a little over 2 months into the campaign, the #MyJihad Facebook page is 7,000+ fans strong, has a 1500+ following on Twitter, 160k views on YouTube, and has even been covered on all major local and international news networks including CNN, BBC Arabic, Aljazeera, Washington Post, Huffington Post and NPR, to name a few.

“We’ve received hundreds of messages, Facebook posts, and tweets from people of all faiths saying how they had misunderstood the term jihad and now understand what it truly means,” adds Angie,

“We even have non-Muslims – Jewish and Christian people in various fields of work, completely unrelated to this effort, catching wind of this campaign and using the term jihad for struggle in their staff meetings and college lectures! Now THAT is changing the narrative.”

Though probably an even stronger indicator of the campaign’s outreach is the response it has garnered from the likes of Pamela Gellar and other hardcore anti-Islam activists and groups such as the English Defence League, who have since attempted to usurp the intent behind the initiative by linking it up to hate-mongering slogans in tune with their own messaging.  But Angie and the team aren’t fazed, “They refuse to accept what we are representing- which is truly the real Islam. They refuse it because it would destroy them.”

A mere fly in the ointment, for word of “My Jihad” has reached international waters as well, with people from Europe, Asia, Australia, and even the Middle East asking to bring the campaign to their cities.

Short term future plans for “My Jihad” include more US ad launches, and activation of the university and community outreach portion of the campaign. In the long term, the team does have their sights set internationally – including the UK, Turkey, Australia, and Egypt to name a few. Insha’Allah.

To learn more about the “My Jihad” campaign, and how you can support it, visit www.MyJihad.org.

‘You Deserve Racism Because You’re Corrupt’