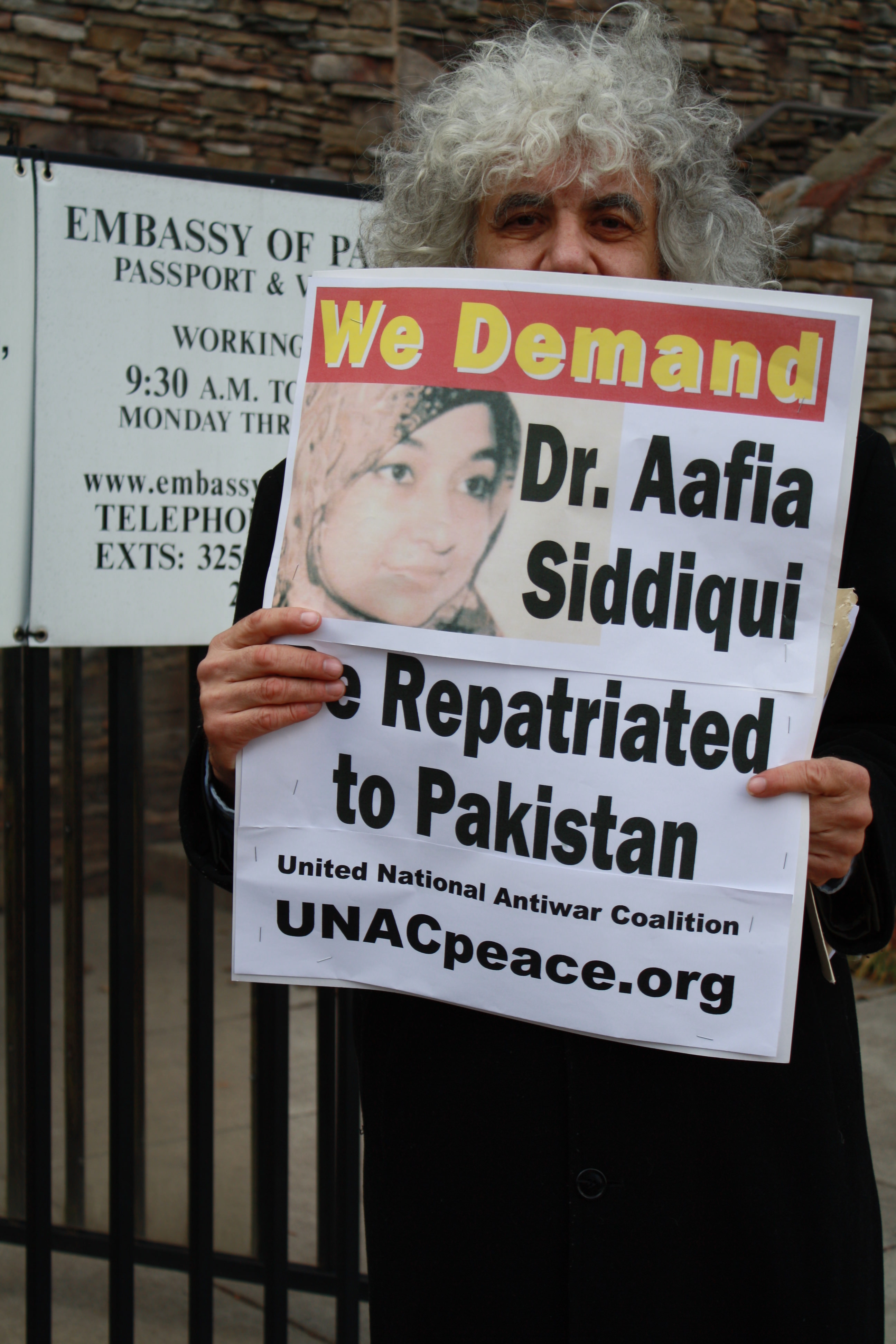 On International Women’s Day, March 8th, 2013, anti-war, civil liberties, and Muslim activists, along with college students and families joined hands in demanding the repatriation of political prisoner Dr. Aafia Siddiqui back to her home country of Pakistan, and the compassionate release of Attorney Lynne Stewart. The peaceful protest was held outside the Pakistani Embassy in Washington, D.C.

More than fifty  protestors braved the cold weather and held up signs asking the Pakistani government to have the moral fortitude to demand the return of Aafia: “Pakistan reclaim your national honor, free Aafia Siddiqui,” read one sign, another read “Islamic Republic of Pakistan, be Islamic- defend the oppressed.” Speeches opposing political repression here in the U.S. and wars and oppression overseas were heard.

This protest is one in the series of protests held across the world, from South Africa to Karachi, marking the ten year anniversary of the date Dr. Siddiqui was abducted with her children from outside her home in Pakistan. This initiative will culminate in a massive protest outside Carswell prison in Fort Worth, TX where Aafia Siddiqui and cancer-ridden Lynne Stewart are imprisoned. “A hundred women have died at Carswell prison over a period of ten years. We are very concerned about the nature of their confinement,” said Mauri Saalakhan, director of Peace thru Justice Foundation, an organizer of the protest. The coalition also demanded an independent medical team to examine Siddiqui in Carswell Prison.

As part of Friday’s mobilization, a delegation of Pakistani-Americans and activists formally petitioned the government of Pakistan to do more to secure the repatriation of its citizen.

Earlier that day, a press conference was held at the National Press Club in Washington, D.C. The purpose of the press conference was to announce support for the compassionate release of human rights attorney Lynne Stewart, accountability in the case of Rachel Corrie and repatriation of Aafia Siddiqui to Pakistan.

Ann Wright urged the women in the U.S. military to disclose what happened to Siddiqui while she was in custody in Afghanistan. “On International Women’s Day, I am calling the women in our military who know anything about this to think with their conscience; what do they really know about that day? Having been in the military myself for 29 years, I know there is more to the story,” stated Wright. She emphasized that Aafia Siddiqui was never charged with terrorism or  ties to Al-Qaeda, or the Taliban, but is serving a 86-year imprisonment for her alleged attempt to kill US soldiers in Afghanistan.

Activists have also traveled to Pakistan over the past year to urge the Pakistani government to ask for Aafia’s release, before the upcoming elections. She is a national hero as hundreds of thousands have come to the streets demanding her release. Former US Senator Mike Gravel recently suggested that the American Muslim civil advocacy groups should approach the nominated Defense Secretary Chuck Hagel and Secretary of State John Kerry to secure the release of Dr. Aafia. Surprisingly, the only Muslim leader that attended the Friday’s protest was Imam Mohammad al-Asi.

In 2012, on a visit to Pakistan Gravel is quoted saying that if the right practical steps are taken Siddiqui could be home in two days. However, the biggest roadblock is that the government of Pakistan has never asked for the release of their citizen, who was tried in the U.S.

Former Foreign Minister, Khurshid Kasuri has admitted to the role that the Pakistani government played in her tribulation. “Kidnapping and secret renditions have happened to thousands of people in Pakistan and Afghanistan,” said Flounders.

Internationally known human rights attorney with a 50 year record of political activism, Lynne Stewart was charged under the Bush Administration for providing material support to terrorists. She found guilty of distributing press releases on behalf of her client. Stewart and her supporters decry this accusation and maintain her only crime was of providing her client, the blind Sheikh Omar Abdel-Rahman, with a fearless defense. Her case is a seen as a miscarriage of justice in the land of the free as an aftermath to 9/11.

Eight years after her conviction, her imprisonment was ordered, precluding surgery she had scheduled in a major New York hospital. Family says that 74 year old Lynne Stewart is facing an immediate life-threatening crisis as her breast cancer has reappeared in her lymph nodes, and trips to physicians involve attempting to walk with 10 pounds of shackles on her wrist and ankle. She is not permitted access to her physicians and specialists. Despite her illness,  she continues to remain upbeat says her husband, Ralph Poynter, as he retold feisty stories of his wife’s incarceration.

Joe Lombardo, the National Coordinator of UNAC spoke on the domestic component of the anti-war movement.  “This is our fight against the ‘war on terror’. On International Women’s  Day, the anti-war movement will take up the battle for Lynne Stewart, for Aafia Siddiqui, against preemptive prosecutions, wherever there is injustice.” Joe had also traveled to Pakistan. Read about his trip here.

Each speaker shared insights on why these cases were important to their organizations. “This country doesn’t need judges and politicians who don’t follow the law. We need judges who love the constitution,” said Shahid Comrade. “What has changed in the past 35 years? The very constitution is in danger today. Putting an innocent woman behind bars for 86 years; putting a woman behind bars for defending a blind man,” expressed Saleem Akhtar, the V.P. of the American Muslim Task Force, “when an empire is about to crumble, [it does] stupid things.” He reiterated that his allegiance is to the United States of America, not the United Empire of America.

“Aafia Siddiqui is a classic example of preemptive  prosecution. What happens to Aafia will help people understand the problem that we have all across the system,” said Steve Downs, of the NCPCF. His other concern was the lack of accountability of governments.

Sue Udry, of Defending Dissent Foundation also spoke in solidarity with Aafia Siddiqui and Lynne Stewart at the National Press Club in Washington D.C. “For those opposed to FBI raids and political repression in the U.S., Aafia Siddiqui’s incredible story makes a lot of sense.” Her kidnapping and rendition were familiar tactics U.S. government will send heavily armed agents to invade people’s homes, wave automatic weapons in the faces of loved ones and children and take away notebooks, phones, computers, address lists of activists or anything they want.”

In her statement,  Udry pointed to many cases in the United States where political freedom is being repressed: from the anti-war 23 who formed the Committee to Stop FBI Repression, to the Occupy Wall Street movement, to the nearly 200 Arab-American and Muslim political prisoners held in solitary confinement and other punishment units that violate basic human rights.

Keeping in mind mass protests by the people sent Nelson Mandela home, the coalition continues to plan such activities until these political prisoners come home. 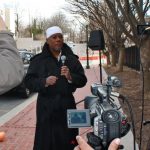 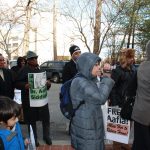 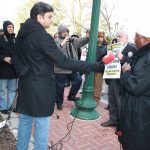 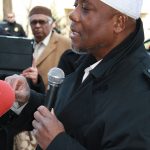 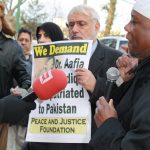 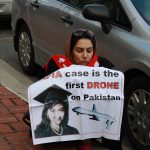 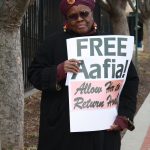 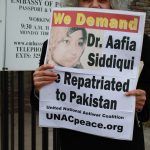 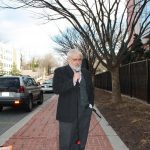 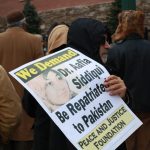 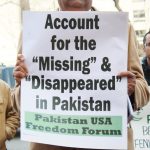 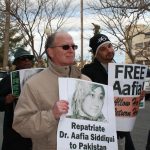 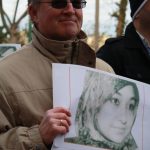 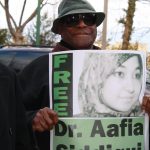 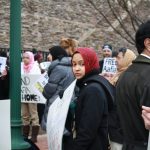 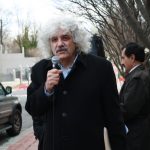 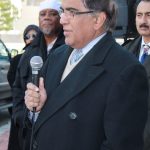 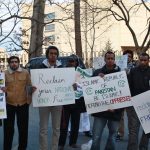 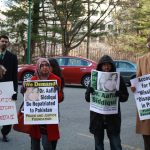 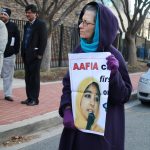 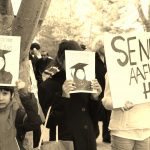 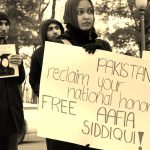 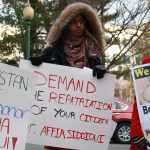 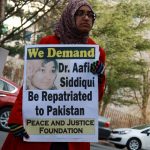 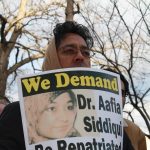 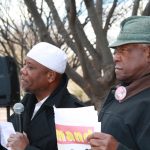 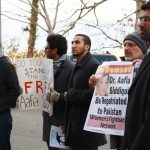 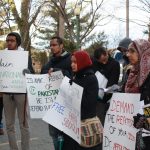 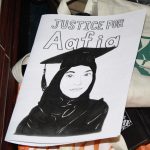 Written for The Muslim Link