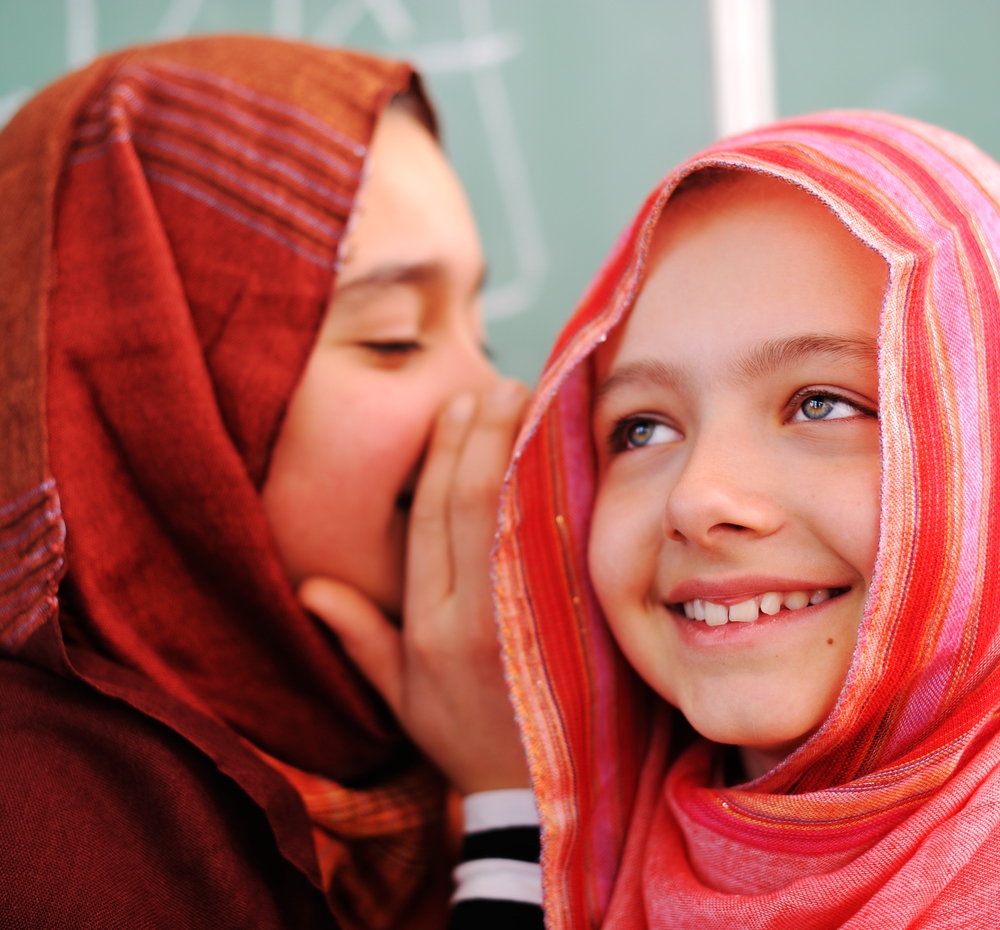 She is curled up next to me reading a ‘Wrinkle in Time’, when she suddenly turns around and says “Mama, you know the difference between you and my friends’ mothers?”

“No, seriously, I can talk to you and you don’t freak out and you don’t try to control me.  You have rules but you don’t make every choice in my life.”

My eldest is a tween (a pre-teen) – an awkward stage where she is not a child but not quite a woman yet. Hormones are kicking in, tastes are altering, and everything from her body to her attitude is changing. She feels more intensely and is bombarded with sexuality, smoking and other temptations all around. At this stage I have to work harder on my relationship with her so she can resist the pressure when she is a teenager.

Mr. Raza (*name changed) sat in my office; he was here to enroll his 13-year-old son into a Qurʾān class. As he was filling the registration form, he suddenly held his head and said in a shaky voice, “I have failed as a father!” His elder son was 18, involved with drugs, running with the wrong crowd. He didn’t know where his 22-year-old daughter was, as she didn’t talk to him anymore.

“Where did I go wrong? What could I have done differently?” I get asked these questions so many times.

Most parents want a mutually respectful and loving relationship with their children, but often do not know how to achieve it. I really think parenting teens means giving in to their harmless pleasures, saying yes to the little things, so when you do say no to things that are absolutely unacceptable, they trust that you are not trying to control them but are ‘raising’ them.

Parents need to know that kids are hitting puberty earlier, but we do not let them become adults until much later in life. We do not give them responsibility or teach them how to make choices.  As parents, we have to remember that we were their age once. We made similar mistakes. Sometimes they are testing their limits and our boundaries, but often they are just trying to get our attention.

It is hard work to parent teenagers, so start early. I say what I say after working as a youth group leader for years. Psychologists tell us that the reward centers of the adolescent brain are much more active than those of either children or adults. Think about the incomparable intensity of the first crush, the never-to-be-recaptured euphoria of the school cricket club championship; compare this to our relatively sedated adult emotions.

Here are tips to help foster a strong bond with your tween:

Make Islam a daily, relevant part of your life. Kids can spot a hypocrite from a mile away. When Islam is relegated to something we do when a family member dies or a book wrapped up in silk, perched high up on our bookshelf, and then we use Islam to shame them into behaving, kids are confused. Even worse, if all they know about their faith is a quick prayer in a language that they don’t understand, taught to them by a ‘qari-sahab’ that they cannot relate to, how can we raise spiritual children who we have deep bonds with?

Your children are not your children.
They are the sons and daughters of life’s longing for itself.
They come through you but not from you,
And though they are with you yet they belong not to you

Know who their friends are. It is absolutely imperative that you know who their friends are and who their friend’s parents are.  It is not enough that they live down the street or work in that great company or attend the same club as you do. At this age children’s peers start replacing parents. Kids start resisting contact with parents.  When this happens then their friends start dictating how they should act instead of your children taking their cues from you. Friendships are important, but should not be as important as the primary relationship, which is with the mother and the father.

Spend time one-on-one.  It is hard to find time to spend individually with each of our children, but this is so important, especially when you see changes in your tween’s behavior. Focus on the relationship, not the conduct. Dr. Gordon Neufield, one of Canada’s leading clinical psychologist, points out that if our spouse was being rude to us or not talking to us or rolling their eyes at us, we would not think that they have a conduct problem, we would think we have a relationship problem. We need to do the same thing with our children.  Take them for a drive, run errands with them or just sit on their bed and chat.

Spending time with family members is an act of worship in Islam so even if it is a few minutes a day, a calm conversation, not a lecture, can benefit both the parent and the child.

Communication, communication, communication. If all you are getting from your son or daughter is blank stares, monosyllabic answers or aggressive language, reflect on your part in the relationship. When they are younger, we hug them, shower kisses on them but as they grow older, many parents tend to start getting reserved with their teens. Fathers, especially, tend to back off after girls become a certain age. They start feeling ‘uncomfortable’ around their girls. Girls need fathers who constantly make them feel like they are a part of each other’s lives. If young girls, who are taking their first steps towards womanhood get positive male attention at home then they will not go seeking this attention elsewhere.

Tweens and teens should feel like they can confide in their parents and talk to them about various topics, from finding someone attractive to following their dream careers without being blasted for being ‘out of control’.

Kids this age often make statements like “I don’t need your rules; I am going to run away.” If you face this, take them to slums or go feed the poor where they will see with their own eyes how people who run away from home live.

Get other adults involved in your kids’ lives. This really helps you parent, when kids know that there is someone aside from the parents who is keeping tabs on them, like teachers, aunts, uncles, an older cousin and neighbors. They need other upright adults involved in their lives that they can also trust. Ask these adults to check in on them and talk to them, reinforcing the principles that you are raising them with.

Be Tech Savvy. In the social media, super-connected world of today, parents really do themselves a disservice when they do not educate themselves about gadgets and technology. Don’t give your child a smartphone if you do not know how to use it yourself.

Maintain a balance. Even if you have ‘good kids’ do not just assume that your kid is ‘good’. My mother-in-law used to surprise visit my husband even while he was in college – she would just show up at his dorm, without letting him know, to check up on him.

Don’t think that your child can never do wrong; such parents lose their kids. Many parents whose children are changing in front of their eyes refuse to take sincere advice and gently curb the children while they are in their early teens.  These parents will get upset with the person who is giving the advice and ignore the situation.

But do not go to the other extreme of becoming the “ḥarām police” either, constantly spying on them and thinking that they are going to do something forbidden. At that point, because your expectations of them are so low, they start thinking, “I must be bad, that is why they (my parents) think I am bad, so let me act out on it.”
They will make mistakes. When they reach a certain age they will make mistakes, it is inevitable. That is the time we need to let go. We can just give them the message in a loving but firm way. After a certain age it is their choice if they want to make the decision to follow the Sirāṭ’l-Mustaqīm or not. We cannot force them. Hidāyah comes from Allāh and we can only make du‘ā’.

One thing that really helps me is reminding myself that we will all be the same age in Jannah, (inshā’Allāh) and that their souls are just as old as ours. When we look at it from this perspective, it is easier to control our anger and focus on the issue at hand.

To discipline them cut off their spending money or take away their gadgets (phone, laptop, games), set down strict laws and then monitor them to make sure they are adhering to your rules.

They will stray but they can just as easily come back. Many people never give their children who make grave mistakes a chance to make tawbah, to repent, and come back to Allāh. When God hasn’t closed that path, who are we to say that Allāh will never forgive you.

Very few teens go out of control if they are given set boundaries, which don’t keep changing every few weeks or months; and whose parents are constantly praying for them and talking to them about everything, without huge gaps in communication.

The Originals | A documentary about the inception of the Muslim community in Houston, Texas

5 things Muslims can learn from Christmas