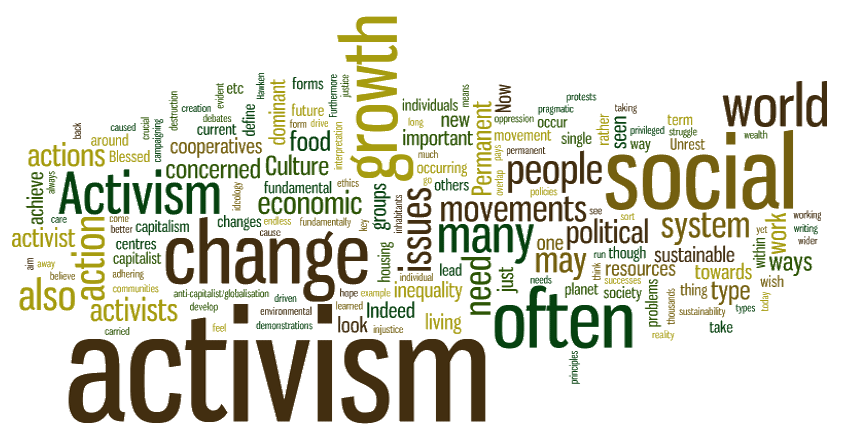 Truth be told, I have never liked the term “activism” as applied to Islam or Muslims, not least because it is unclear and nebulous and cobbles together many disparate thoughts, activities and people under a single umbrella.

Nonetheless, since activism tends to refers to the efforts to promote or to direct social, political, economic or environmental change, Islam most certainly has some take on such matters; and hence has something of great significance to contribute to “activism”. And while it is true certain Muslim activists are still more influenced by Marxist style paradigms than the guidance offered by the shari‘ah and the Prophet’s seerah (Prophetic biography); and while it is also true that some activism has been made inherently anti-spiritual; nonetheless, there are many forms activism can take which can and do mirror Islam’s teachings: in both letter and spirit.

Islam’s vision of man and society has never been utopian, for the very nature of this world is one of imperfection. Rather, the social guidance Islam offers is mapped out against the contours of human reality.

That said, Islam does seek to foster certain virtues so as to nurture a just, ethical and civil social order that can help steer us through the darknesses that punctuate, and in some cases, suffocate the human experience. In such a society, each of its members – along with, and oftentimes, in spite of the state – has a personal responsibility; a duty, to promote virtue and prevent vice. Each individual is responsible for the well-being of their fellow ‘brothers’ and ‘sisters’: helping them in poverty; comforting them in distress; relieving them in hardship; counselling them and, in the spirit of kindness, putting them right when they stray or err:

The believers, men and women, are allies to each other, they enjoin the good and forbid the evil. [Surah At-Taubah, 71]

You are the best community that has been raised up for mankind. You enjoin the good and forbid the evil, and you believe in God. [Surah Aal-‘Imran, 110]

Nor is Islam’s concern limited just to the welfare of believers.

Have you observed, asks the Qur’an, him who denies the Religion? Such is he who repels the orphan, and who does not urge the feeding of the poor … and who refuses to give neighborly assistance. [Surah Al-Maa’oon, 1-7]

The poor and the orphans, here, are not referring to just Muslims; but to any and all orphans and poor. The same concern is also with economic injustices:

Woe to those who deal in fraud; those who, when others measure for them, exact in full, but when they measure or weigh for others, defraud them! [Surah Al-Mutaffifin, 1-3]

As to the monstrous Arab practice of female infanticide, the Qur’an takes great exception to it:

When one of them receives tidings [of the birth] of a baby girl, his face darkens and he hides his grief. He then conceals himself from people, due to the bad news he has received, [asking himself]: ‘Shall he keep her and be ashamed, or bury her beneath the dust?’ Evil indeed is their judgement. [Surah An-Nahl, 58-59]

All these injustices and evils – moral, social and economical – were challenged by Islam, which demanded that they be stood up to and be eliminated wherever possible. The Qurʾānic stance, in short, is simply this: evil must be opposed; wrongs must be righted.

As for the prophetic narratives, they make it explicitly clear that the duty of enjoining good and forbidding evil (al-amr bi’l-ma‘ruf wa’l-nahi ‘ani’l-munkar) is actually an issue of faith.

The idea of activism, as such, doesn’t make an appearance in classical formulations of Islam. Perhaps the nearest thing to it in pre-modern writings on Islam is the Qurʾānic mandate to ‘enjoin good and forbid evil.’ Without suggesting that the two are identical (the core of the classical concept involved a personal duty to right wrongs committed by fellow believers; the core of the new activism is a much more systematic, organised propagation of Islamic and universal values within and outside Muslim communities), Muslim activism is still duty bound to reflect the Qurʾānic directives for changing and challenging the wrong. So along with courage, compassion and concern – courage to standup to immorality and injustice, and compassion and concern for human dignity and welfare – Islamic activism must be led by the prophetic guidelines and established juristic norms in respect to enjoining good or forbidding evil. How else will it qualify as being ‘Islamic’?

The body of scholarly literature on this subject stresses that those who enjoin good or forbid evil must do so by observing certain necessary traits – at the head of which are: Knowledge, Gentleness, Justice and Patience.

Ibn Taymiyyah states: ‘Therefore these three are essential: knowledge, gentleness and patience. Knowledge precedes commanding and forbidding, gentleness accompanies it, and patience follows – although all three go hand in hand in the matter.’2

Ibn Qudamah wrote: ‘In general there are three traits required of one who commands or forbids:

God, Exalted is He, said:

It is narrated that Abu’l-Darda’ once came across a man who had committed a sin for which people were reviling him. He said to them: “Don’t you see that if you had found him in a well wouldn’t you try to rescue him?’” They replied: Yes. He then said: “So do not revile him; instead thank God that He has saved you.” They asked: But shouldn’t we hate him? He replied: “Rather hate his action.”’3

“Government scholars” are not necessarily scholars employed by the state. Instead, it applies to those scholars whose intended aim is to be royalist and defend official state policies regardless of truth, justice and the shari‘ah. Their goal is not God, as much as it is to placate the palace. They are different from those government appointed scholars whose lives are a testimony to their God-fearingness and piety, but whose perceptions and outlook, when it comes to fatwas on larger political matters, are skewered by false government briefing, misinformation and propaganda. The personal integrity of such scholars is unquestionable; their political fatwas less so.

“Populist scholars” are at the other end of the spectrum. They are scholars whose chief purpose is being popular among the masses. Their fatwas are always anti-government merely for the sake of being so. Again, God, justice, and the greater public welfare isn’t their main goal, as much as it is keeping the hysteria of the masses happy, courting the crowd, and pandering to the public’s praise. These people, as with the above, have also betrayed their scholarly credentials.

As for the “righteous religious scholars”, their goal is God’s good pleasure. They issue fatwas out of piety, in light of the shari‘ah and with trying to conceptualize the actual situation. Their fatwas are based on knowledge, justice and on scrupulousness. God’s pleasure is their aim: whether the fatwa agrees with the monarchy or the masses; the president or the public.

As for activism driven principally by emotion, zealotry, ignorance, anger, vengeance, abusing the scholars, and actors hidden from the public eye, or puppeteers pulling the strings of the herd from on high – this shall never bode well for Muslims; at least not in the long run. One suspects that only the devil and Islam’s avowed enemies will rub their hands in glee at such a precarious situation.

One final word about activism. As we seek to change our outer world, we must strive to rectify our inner world too: the two are inextricably linked and intertwined. Thus for activism to bear the desired fruits, there must be active sincerity of the soul, active obedience to the One, and active intention for self-improvement. Bottom line for any change is:

Never does God change the condition of a people, unless they change what is in themselves. [ Surah Ar-Ra’d, 11]

Got a Survival Kit? Help for Muslim Apostates ©