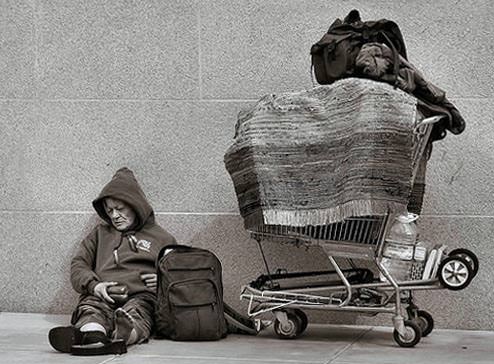 Frost covered the luxury cars parked in front of my apartment complex, and the thin cloud of exhaled air confirmed the usual Bay Area early morning chill.  I was looking forward to an egg tortilla for breakfast, but without the actual tortilla, there wasn’t much chance of that happening.  I live a two-minute walk away from the grocery store as well as other fast-food restaurants and coffee shops, so a quick morning stroll would rectify the shortage.  Besides that, I enjoyed walking the area because of the hustle and bustle of young families and professionals walking the streets, as well as the daily clear blue skies, so any excuse (like buying tortillas) to soak in that ambiance would do.

Upon returning home, I found an old Filipino woman picking through our apartment’s recycling dumpster which was left out front on the main street daily for collection.  She wore a beat-up and grimy, thick, blue hooded sweatshirt with the hood drawn over her head, along with a jacket on top of that.  Her hands were covered with what looked like gardening gloves.  She picked carefully through the bins for large plastic containers and placed them in a utility cart lined with a worn, black trash bag.

I felt sorry for her, and I had no cash on hand as everything is plastic these days, even the cash in our accounts.  I did have two bags of tortillas and thought this would be a great opportunity for charity – I could give her one of my bags of tortillas instead of her picking through the trash for food.  When I offered her a bag of tortillas, however, she refused them.

“I’m not picking through these bins for food,” she told me.  When I asked her why she was going through the cans, she said, “I’m not homeless – I have a home and food.  I collect all these plastic containers for the poor people in the Phillipines.  It’s cheaper for me to send food and other items using these empty plastic containers than buying it through charity services.  Charity services cost $200 – $400 for just a couple of boxes.  I have a pension that I receive, but my pension goes to my home, so this work I do is for charity back home.  You are the first person to ask me why I am doing this, otherwise people just come to me and assume I’m looking for food. They yell at me and tell me I can’t do this.  I don’t argue with them, I just walk away.  They don’t understand what I’m doing, but you are the first person to ask.”

I didn’t know what to say to her, except to thank her for her good work and to tell her, “God bless you.”  She left me with a lot to think about, and here are three reflections that came to mind after this encounter:

1.  Dedication and Sincerity Takes Many Forms

Oftentimes at charity fundraisers, the difficulty is in calculating daily costs against what’s in the bank account, and deciding what luxuries of life one will forgo in lieu of the guaranteed multiplied return from Allah

, but extra financial sacrifice isn’t the only way to show dedication or sincerity to a cause.  Here was an elderly woman who could have been content collecting her pension, but instead was out on a cold morning, taking occasional harassment, and knowing that people thought she was a bag lady, persevering through it all to help the poor in the Phillipines.  It made me wonder what kind of work I would do, what kind of abuse I would take, to help those in need.

2.  Maximize the Benefit by Lowering Costs

The existing modes of charity were too expensive for her budget, but she still wanted to donate, so she found a way to cut costs and provide benefits for less cost.  A question for individual households to ask themselves – what costs can you cut from your monthly budget to donate more?  What time-wasting can you cut from your schedule to volunteer more?  At an organizational level, are you regularly reviewing your own budgets and shopping around for cheaper ways to get the same work done so you can maximize the benefit of the money received?

3.  Curiosity is a Habit of Humility

This woman told me no one asked her what she was doing.  I have seen poor people on many occasions harassed in front of the masjid for asking for money, or trying to sell something small that they have for charity.  This past Ramaḍān I saw one man verbally talk down to a woman in front of the masjid, saying sternly  “You shouldn’t be out here, we have zakāh set up in the masjid already, you should talk to them.”  She simply lowered her eyes and said, “Jazākallāhu khayran,Jazākallāhu khayran,” and after he left, she kept selling.  I stopped by and gave her the little cash I had in my pocket and she told me this money was for her brother’s surgery.  Does the masjid zakāh cover astronomically expensive out-of-pocket surgical procedures for life-threatening illnesses?  My guess is likely not.  Before jumping to conclusions, it’s best to first have some curiosity – approach the person and ask them why they are doing what they are doing (if it’s something odd), and understand why they are doing it, think about it, and then offer them your input.  You’ll note that even I made the mistake of assuming the elderly woman was poor and scraping for food, when in reality she was doing something far nobler and wasn’t in need of my charity.  Lead with a question, not with a conclusion.

All-in-all, it was a great way to start the morning.  I went out looking to make an egg burrito for myself and offer some bread in charity, and instead this amazing woman I encountered offered me better food for thought, and I’m still mentally digesting it all.  I would love to hear any thoughts you guys have on this as well.

MM Treasures: Amid the Tents of Mina, the Dua of a Mother