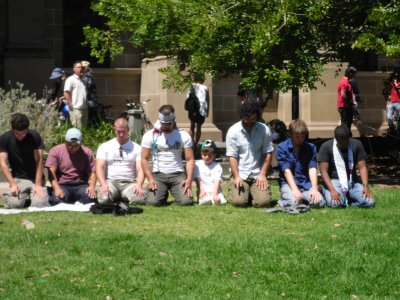 “If you don’t convert to (my sect) you might as well not convert to Islam!” exclaimed the ‘uncle’ to the young Christian lady. The lady’s husband, a Muslim, had requested his elder friend to come and help explain to her why Islam is so important to him, and why he’d like her, too, to share in its joy. The husband was startled by this narrow-minded bombshell. The shocking words of the ‘uncle’ highlight a lack of priorities plaguing some of those who profess themselves to be Muslim.

It is understandable for someone to feel passionately about a cause which (rightly or wrongly) they believe to be true. I remember a rabbi relating how he went home after his first year at rabbinical seminary and began self-righteously passing judgment on and correcting what seemed to be a plethora of misdeeds and mistakes of his family. But passionate belief (even when correct) becomes problematic if it results in a narrowed vision of reality and truth, and even more so when it leads to behavior that turns others away from the Path to God.

was once leading prayers when he heard a man in the congregation saying, “O God! Bless me and Muhammad, and don’t bless anyone else with us!” After the congregational prayer was over, the Prophet

remarked, chastising him, “You have restricted a capacious [thing]!” (Sahih al-Bukhari and others)

The blessings of God, and especially the spiritual blessing of right guidance embodied in the Final Revelation (the Qur’an), should not be confused with human constructions of group identity and boundaries. More specifically, some Muslims are sometimes (and any frequency is too often for something this important) too quick to declare someone to be outside the fold of Islam due to (i) imperfect practice, or (ii) disagreement on a non-core belief.

It is essential to realize that the believer’s life is an ongoing journey of struggle to become a better person. None of us – including those born and raised as Muslims – are perfect. It is grossly unreasonable – nay, evil – to deny a neophyte entry to their newly-found faith, merely because s/he is not living a totally sinless life. The priority, for someone who has understood the basic message of Islam and voluntarily resolved to embrace Islam, is to help him/her to say the shahadatayn (the Declaration of Faith: “I bear witness that there is none worthy of worship but God, and that Muhammad is the Messenger of God”) without delay.

Anything else – be it taking a bath (ghusl) for ritual purification, or giving up a personal vice – can wait. Anything else on your own to-do list can wait too. The Prophet

once even halted his Friday sermon to respond to a man who came to ask critical questions about belief. [Sahih Muslim and others] Imam Nawawi, the Shafi`i jurist, writes in his encyclopedic Majmu` that his school’s official position is that a Muslim is sinful for telling the ready convert to go and take a bath before having him/her say the shahada; indeed some Shafi`i jurists (Mutawalli and Baghawi) considered the one who gives such an order himself to have committed unbelief (by not realizing the importance and priority of the shahadah).

Similarly, the hopeful ready-to-submit-to-God should not be denied the shahadah merely on account of what we might consider as his/her sinful behavior, be it an attachment to alcohol or drugs, or involvement in an immoral or prohibited type of relationship. The priority is to help them aboard the ship of Divine Grace (by helping them say the shahadah); they can work on themselves in due course.

Even after the shahadah, the new convert should not be overburdened with duties and requirements. Give them time to grow, to learn, to discover, realize and make decisions and changes from their own conviction and at a fitting pace. The Prophet

rebuked one of his companions for cursing a man who would repeatedly be found drinking alcohol, and declared that the drinker “loves God and His Messenger”. [Sahih al-Bukhari and others] And he would instruct emissaries and teachers, before sending them on their mission, with the advice, “Make things easy, and don’t make things difficult. Give people good news, and don’t drive them away.” [Sahih Muslim and others]

Belief in the Fundamentals

It is of course necessary for an intending convert to have a general understanding of the core beliefs and practices of Islam (often called ‘pillars’: belief in God, Prophets, Scripture and the Hereafter, and performance of the shahadah, the prayer, fasting Ramadan, prescribed charity and the pilgrimage.) They are not required to know all the details, as these take time to learn, and in some cases are non-essential, or are not clear-cut and hence open to different interpretations.

The kernel of Islam, acknowledging the oneness of God, that God alone should be worshiped, and that the Qur’an is the book for human guidance revealed to the Prophet Muhammad

, is simple, despite its profundity and universality. Edward Montet described it as, “A creed so precise, so stripped of all theological complexities and consequently so accessible to the ordinary understanding might be expected to possess and does indeed possess a marvelous power of winning its way into the consciences of men.” [Edward Montet, La Propagande Chretienne et ses Adversaries Musulmans, Paris 1890, p. 17-8, as quoted by T.W. Arnold, The Preaching of Islam, London 1913, p. 337.]

Someone with whom this profound truth has resonated should not be denied admittance to the House of Islam – nor expelled from it after entering – merely because of their not understanding, or having difficulty accepting, a more peripheral or secondary point of belief or practice. It pains me for an overt Muslim to be declared an unbeliever, or to be frightened away from Islam (and I have seen such cases personally) because of their not being convinced with the prevalent view about the place (or otherwise) of certain punishments and regulations in Islam (e.g. whether and when capital punishment is mandated for apostasy, or stoning for adultery, or the legal status of hijab).

I am not advocating complete relativism, nor denying the value and importance of Muslim scholarly endeavor and its opinions, nor am I saying that opposing views are always legitimate or correct. What I am pleading for is tolerance; of giving the benefit of doubt, whenever possible, to other professed Muslims who seem to be misinterpreting a sacred text. We are entitled to believe that a particular interpretation is wrong, even potentially sinful, but that does not justify excommunicating a person who holds to that interpretation, unless it involves something clear-cut and essential to Islam. Imam al-Shafi`i termed such core issues ‘public knowledge’ (`ilm al-`amma), and examples he gave to illustrate it are: the obligation and form of the five prayers and of fasting Ramadan, and the prohibitions of fornication, murder, theft and wine, and other such things, “in which error is not possible, nor [is it open to] interpretation or dispute.” [Shafi`i, al-Umm] Ibn Abi’l-`Izz, in his commentary on Tahawi’s Creed, has discussed how a person may not be excommunicated on the basis of a shubha: a genuine misunderstanding s/he has reached on the basis of a sacred text.

Renowned theologian Abu’l-Hasan al-Ash`ari, who studied, debated and refuted many heterodox Muslim sects, declared on his deathbed to one of his students, “Bear witness that I do not judge any of the People of the Qibla to be unbelievers.” Shams al-Din al-Dhahabi, after quoting this account, mentions that his own personal belief is along these lines, and that he heard similar words from his teacher Ibn Taymiyyah towards the end of his life, “I do not declare anyone of the ummah an unbeliever. The Prophet

said, ‘None but a believer takes care of his ritual purity (wudu’).’ So, whoever adheres to the prescribed prayers in a state of purity (wudu’) is a believer.” [Dhahabi, Siyar A`lam al-Nubala’]

The problem, as one of our shaykhs remarked to us, is that today we want to be muftis and judges (declaring a person to be inside or outside Islam), whereas the Prophet

was an inviter to God’s way (da`iya). So, rather than worrying about the creedal judgment on a particular person, we should be more interested in asking ourselves, “How can I help him understand that he is mistaken?” Indeed, in some cases it might even be a case of, “How can I correct or fine-tune my own understanding of this issue?”

A believer is expected to be humble, and part of humility is acknowledging the limits of our individual knowledge: both of details of the religion, as well as of the inner workings of other people’s hearts. If you consider yourself a Caller to God, then you should be calling to those things that are unambiguously and centrally part of God’s revealed religion of Islam, and not to your own sect or interpretations of Islam. By all means, let us continue meaningful dialogue, and furthering the education of ourselves and others. But let’s realize the kernel and the priorities, so that we don’t hinder or expel others who are genuinely seeking or attempting to navigate the Path to God.

The author is the Muslim Chaplain at the Massachusetts Institute of Technology and a lecturer at Brandeis University.