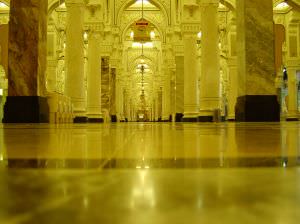 Considering the era in which we live in today, many topics that were once considered “taboo” are now openly discussed and even satirized via mediums such as film, text, classrooms, and of course, the internet. Things that were once considered “embarrassing” or “shameful” to talk about such as sex/sexuality, personal development, mental health, and so on, now constitute the norm of daily inter-personal discussion (at least in most parts of the West and Europe).

What fascinates me, however, is that despite the apparent open-mindedness that has seemed to accompany the modernity and “progress” of the 21st century, there is one topic that puts most people on the edge of their seats. A topic which has those willing to engage in discourse about controversial issues such as teen abstinence or drug-abuse fleeing from their place of discussion – and that topic is RELIGION.

I had not been aware of how uneasy people felt about the “R” word until I, myself, became a little more educated in the area. After taking a number of religious studies courses, I was surprised at how much I did not know – not only about other religions, but my own as well. I began to see how the stereotypes, biases, and misconceptions that I had been holding onto in terms of other religions were simply unacceptable. However, after listening to and participating in various class discussions, I also found that many, many people held stereotypes, biases, and misconceptions about Islam that, too, were completely unacceptable. I then realized that in order to be able to defend the religion of Islam from unwarranted attacks and judgements, I not only had to educate myself about the deen of Islam, but I also had to learn about other religions. I mean, how could I defend Islam without a) knowing about it myself and b) knowing how to counter arguments that stemmed from religious views other than my own? To me, climbing out of my hole of ignorance made practical sense.

And so I embarked on a journey of studying other religious denominations, and even took up religious studies as my minor. After learning about Islam, Hinduism, Buddhism, Christianity, Judaism, Sikhism, Taoism, Confucianism, Indigenous religions, and even some miscellaneous beliefs such as Scientology and the Rastafarian movement, I realized that the lens through which I had been viewing the world around me had been extremely blurred. Although I felt guilty for being so utterly ignorant of other people’s beliefs, I found that the more I learned about other religions, the more my own beliefs in Islam became confirmed. That is not to say that I had doubted Islam, but I suffered from something that most people born into Islam did: the inability to justify and understand why I was a Muslim. Looking back, I realize that when I was approached with questions such as “why do you wear that thing on your head?” or “why don’t you eat pork?”, I’d brush people away with answers such as “it’s my personal choice” or “because it’s part of my religion”. The scary part was that I’d do it without seeing these type of answers as a problem. I’d almost look down at people and even become annoyed at – what I saw as – their audacity for questioning MY beliefs. I mean, who were they to do so?

But alhamdullilah, this line of thinking which I had held onto for years was finally shattered when I started to question myself about my beliefs: why did I wear the hijab? Why, exactly, did I refrain from drinking alcohol or eating pork? Interestingly, questioning myself and finding the answers led me to question why other people of various religious denominations believed the things that they did. I mean to me, Islam made perfect sense – testify that your Lord is One with no partners (whether these “partners” manifest themselves as other deities, statues, people, concepts, ideologies, etc) and testify that the Prophet Muhammad

is His last and final Messenger. So, where and in what way, exactly, did Islam differ from other religions?

As a mission to reach out and learn more, I took what I learned in the academic world and began to apply it to the real world: I began to ask Christians about the historical/textual authenticity of the Bible and Sikhs about why men, and not women, were required to cover their hair. I felt that what I had learned had given me a sort of confidence – the ability to not only answer other people’s questions  about Islam, but to ask them intellectual questions about the beliefs that they held.

However, I began to realize that for many people, this engagement in religious discourse made them feel uncomfortable – even threatened! I inferred this from their change in demeanor (specifically, body language) when the subject of religion was brought up. Interestingly, these same people who had, a few moments ago, been willing to discuss anything from sexual orientation to bodily movements, were now either averting there gaze from my face, coyly looking to the ground, anxiously shifting their weight on their feet, immediately changing the subject, giving me a weird look, or all of the above – and then some.

I couldn’t fully understand why this was – I mean, what was it about the “R” word that made people so uncomfortable? I have, in my own way, tried to come up with some answers to this question. Reasons may include:

1. Stereotypes/biases against the very idea of religion.

Through many mediums, especially the media, followers of various religious groups have been portrayed as extreme/fanatic/irrational/etc. Although their may be an inkling of truth to this, it’s mainly untrue. I’m sure any Christian/Muslim/Jew/etc will tell you that they’re just a normal person trying to live a life of pleasing their Lord.

2. Ignorance – about one’s own views or the views of others.

Although many people profess faith – and some completely deny it – their understanding as to why/why not they believe or disbelieve may be limited. Therefore, people may shy away from religious dialogue due to their general lack of knowledge in the area and the shortage of confidence that accompanies it.

Many people won’t admit it, but they do hold implicit/explicit beliefs about religion/worshipers. This may effect their behavior towards religious discourse in a negative fashion and cause them to dampen or avoid discussing the topic altogether.

Maybe people are surprised when the topic of religion is brought up because it’s something that people, unfortunately, just don’t talk about these days. I say, let’s start a movement & begin to question one another about our beliefs (on intellectual and respectful grounds). Why? Well, why not?

So the question now is: where do we go from here? Most people know religion exists, but they simply don’t want to acknowledge it. I say, discard any predisposed biases you may have towards ANY religion and truly open your mind. Further, regardless of which religion you may or may not follow, sincerely study why you believe in what you do so that you may not only feel more confident in engaging in religious dialogue, but so that you’ll also know how to tackle any pressing questions other people may have about your own beliefs – or lack thereof.

A few years ago, I was probably the type to shut myself off from discussing the topic of religion, but with education came enlightenment and with enlightenment came the realization of how crucial it is to separate faith from blind faith. I now refuse to believe for the sake of believing and instead, have faith in the religion of Islam because the questions posed by my rational, logical, and practical mind have been answered, and continue to be answered. Further, part of freeing myself from blind faith has been through engaging in conversations with others and holding much needed inter-faith dialogues. One must remember, however, that there is a right time and place to do so. Also, one must take into consideration who they are speaking to. I have been fortunate enough to have come across some very open-minded people, Muslim and non-Muslim alike, but it’s not that way all of the time.

Remember, change can be threatening and thus, having one’s beliefs questioned may be the most threatening type of change there is. Regardless, it’s time for us to put our guards down a bit and learn about the world around us. It’s time for us to realize that there are countless beliefs that exist outside of our own and that it’s very important for us to step out of our shells of ignorance and explore the world beyond these homes of comfort.

Finally, it’s time for us to make the topic of religion a norm of daily discussion and something that we look forward to engaging in.

Shaykh al-Ghazali and Laying the Foundations of Da‘wah