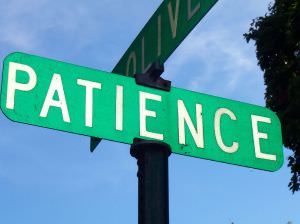 The explanation of this hadith was translated by Abd-Allah

said:  “You will see after me favoritism and things which you will disapprove of.”  They submitted: “What do you order us to do (under such circumstances)?”  He replied, “Discharge your obligations and ask your rights from Allah.” [Bukhari and Muslim].

reported that: A person from among the Ansar said, “O Messenger of Allah! You appointed such and such person and why do you not appoint me?” The Prophet

said: “After me you will see others given preference over you, but you should remain patient till you meet me at the hawd (Al-Kawthar in Jannah).”  [Bukhari and Muslim].

says in his explanation of this hadith: These two ahadith were mentioned by the author in the chapter on patience because they point to it.

As for the hadith of Abdullah Ibn Mas’ud

he has related that the Prophet

said: “You will see after me favoritism”.

‘Favoritism’ means: To withhold something from those who are entitled to it. He

meant that there will govern over the Muslims (some) rulers who will withhold the wealth of the Muslims (for themselves), spending it however they want and preventing the Muslims from having their right from it.

That favoritism and oppression from the rulers is due to them withholding the wealth of which the Muslims have a right to, and they keep for themselves without (sharing it with) the Muslims. But they (the companions) asked: “What do you command us?”  He

“Perform the duties that are upon you,” meaning:  do not let their withholding of the wealth from you prevent you from discharging what obligations you have towards them such as listening and obeying and not starting conflicts and not causing dissension, but rather be patient and listen and obey and do not try to (forcefully) take from them that which Allah has given them.

“Ask Allah for your rights,” meaning: Ask Allah to guide them (the rulers) so that they deliver to you your rights that are upon them. That is from the wisdom of the Prophet

He knew that the souls are meager, and that they won’t be patient upon the one who withholds their rights from them, but he guided (us) to a matter that might have good in it, and that is to discharge what is upon us towards them such as listening and obeying and not disputing the affair and other (obligations).

And in it as well, there is use of wisdom (when dealing) with the issues that might cause instigation, for there is no doubt that the rulers withholding the wealth from the subjects causes the subjects to rebel and ask for their rights, but the Prophet

ordered (us) to be patient upon that, and that we perform what is required upon us, and that we ask Allah for what is ours.

As for the hadith of Usaid Ibn Hudhair

informed that “After me you will see others given preference over you”, but he also said: “you should remain patient till you meet me at the hawd.”

Meaning that if you are patient and do not cause dissention then from the reward of Allah – (in return) for your patience – is that he will give you a drink from his Hawd (fountain), the hawd of the Prophet

This hawd which will be on the Day of Resurrection in a place and time in which the people will be in the greatest need of it because at that place and at that time, on the Last Day, people will be in a state of worry, sorrow, distress, and sweating in the heat which will make them extremely thirsty, so they will go to the hawd of the Prophet

(these two streams will) pour water onto (the Hawd), (the water) will be whiter than milk, and sweeter than honey, and is nicer (fragrance) than the smell of musk, and it has utensils (cups) that are like the stars in the sky in their brightness, excellence, and abundance.  Whoever drinks from it (the hawd) once will never be thirsty after that ever again.

instructed that we be patient even if  we encounter such favoritism, for our patience upon the oppression of the rulers is from the things that causes (one) to pass by the hawd and drink from it.

In these two ahadith there is encouragement to be patient at the injustice of  rulers, but we must know that as the people are they will have (similar) rulers made to rule over them, if they have done wrong in what (affairs that) are between them and Allah then Allah will enable their rulers to gain (power) over them, as Allah said:

“Thus We let some of the wrong-doers have power over others because of what they earn).”  [6:129]

so if the subjects are righteous then Allah will facilitate for them righteous rulers, and if they are otherwise then the case will be the opposite.

And it is mentioned that a man from the Khawarij came to Ali b. Abi Talib

were me and my likes, as for me then my subjects are you and your likes.”  Meaning: From the people who have no good in them, so such a person became a cause for dissension (among the people), inciting the people against Ali bin Abi Talib

and causing them to go out against him, until they killed him.

And it is mentioned that one of the kings of Bani Umayyah, Abdul-Malik bin Marwan heard what the people were saying about him, so he gathered the honorable and respected among the people and addressed them:

“O people, do you want us to be for you like Abu Bakr and Umar?”  They said: “Yes!”  He said: “If you want that then be for us like the subjects of Abu Bakr and Umar!!”  For Allah- Glorified and Exalted- is Wise, He gives power over the people to someone who is appropriate in accordance to their deeds,  if they do wrong then they will be wronged (in return), and if they do good then good will be done to them.

But still there is no doubt that the up righteousness of the ruler is fundamental and that if the ruler is righteous then the subjects will be righteous because the ruler has authority to (be able to) mitigate whoever strays (off the path) and to discipline whoever is wrongful and oppressive.  And Allah (is the One who) gives Tawfeeq.