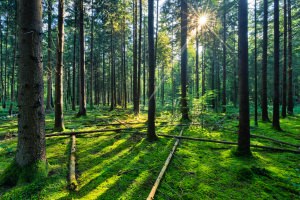 The explanation of this hadith was translated by Abd-Allah

says in his explanation of this hadith:

set this chapter for truthfulness, so he stated: “The Chapter of Truthfulness”, and he mentioned (some) verses which (we) have already talked about.  As for the ahadith, he said: Abdullah bin Mas’ud

The statement “you must be truthful” means adhere to truthfulness where truthfulness is understood as being when the statement exactly matches reality.  For example, if you are asked, “What day is it?” and you say “Today is Wednesday” (and it is actually Wednesday), then this is truthful. However, if you say, “It is Tuesday” then that would be lying.  This was mentioned previously in the hadith of Ka’b Bin Malik

and his two companions who described what indicates the virtue of truthfulness and its good ending (that it leads to); the truthful one will get the (good) ending, and the liar will be the one whose deeds are in vain.  It is mentioned that one of the commoners said, “Lying saves (a person)”, so his brother told him, “Truthfulness is a better savior and better (at saving).”

Know also that a statement may be made by the tongue or by the limbs.

The statement which is made by the tongue is speech, and the statement made by the limbs is action. However, how can lying be through action?  It can be the case if a person performs an outwardly action which is at disagreement with what he hides inside him.  So, for example, the hypocrite is lying because he shows the people that he is a believer – he prays and fasts with the people, he gives charity but he is stingy, and he might even perform Hajj.  So, whoever sees his actions might think him to be righteous, but these actions do not indicate what is hidden on the inside, so it is lying.

“Righteousness” is an abundance of good, and from the names of Allāh is “Al-Barr” (The Beneficent), meaning (the One who is) abundant in good and kindness, glorified and exalted.

“Righteousness” is from the fruits of truthfulness, and the above hadith indicates that righteousness will guide a person who possesses it to Paradise – we ask Allāh to make you and us  of the righteous.  Indeed, Paradise is the purpose of every affair, and that is why the human being is commanded to ask Allāh for Paradise and to seek refuge with Him from the hell-fire:

“Everyone shall taste death. And only on the Day of Resurrection shall you be paid your wages in full. And whoever is removed away from the Fire and admitted to Paradise, he indeed is successful. The life of this world is only the enjoyment of deception (a deceiving thing).” [Surah Aal-‘Imran, 185].

The siddeeq is in the second level of the levels of creation upon whom Allāh has bestowed favors as Allāh says “And whoever obeys Allāh and the Messenger, these are with those upon whom Allāh has bestowed favors from among the prophets and the truthful and the martyrs and the good” [4:69].  The man who strives to speak the truth will be recorded with Allāh as a siddeeq, and it is known that status of a siddeeq is elevated and is not reached except by the unrivaled few from among the people.  In addition, it exists in men and women, as Allāh

“The Messiah [‘Iesa (Jesus)], son of Maryam (Mary), was no more than a Messenger; many were the Messengers that passed away before him. His mother [Maryam (Mary)] was a Siddiqah [i.e. she believed in the words of Allah and His Books (see Verse 66:12)]. They both used to eat food (as any other human being, while Allah does not eat). Look how We make the Ayat (proofs, evidences, verses, lessons, signs, revelations, etc.) clear to them, yet look how they are deluded away (from the truth).” [Surah Al-Ma’idah’, 75].

The most righteous of the siddeeqeen (truthful ones) is the one who is the most truthful from among them, and he is Abu Bakr

when he had called him to Islam, didn’t have any hesitation nor any pause – as soon as the Prophet

called him to Islam he accepted Islam, and believed the Prophet

(at a time) when his people accused him of lying.  Furthermore, he believed him when he

talked about the Isra’ and Mi’raj, but the people accused him of lying and they said, “How can you go, O Muhammad, from Makkah to Jerusalem and come back in one night, and then you say that you went up to the Heaven? That is not possible.”  Then, they went to Abu Bakr

and said to him “Don’t you hear what your companion is saying?”  He said: “What did he say?”  They said: “He said this and that!”  At this, Abu Bakr

said: “If he had said that then he had spoken the truth,” so from that day, he has been called As-siddeeq, may Allāh be pleased with him.

Regarding lying, the Prophet

“Beware” warns us to be wary of lying, which is to say something that is different from reality, regardless of whether it is through speech or action.

If a person asked you “what is today?” and you replied “today is Thursday”, or “Tuesday” (and it was Wednesday) then that is lying because it does not match reality.

Similarly, the hypocrite is a liar because his outward appearance indicates that he is a Muslim, but he is a kaafir, so he is a liar with his actions.

“Such will be the Kafarah (disbelievers in Allah, in His Oneness, and in His Messenger Muhammad

“Nay! Truly, the Record (writing of the deeds) of the Fujjar (disbelievers, sinners, evil-doers and wicked) is (preserved) in Sijjin.And what will make you know what Sijjin is? A Register inscribed.Woe, that Day, to those who deny [(Allah, His Angels, His Books, His Messengers, the Day of Resurrection, and Al-Qadar (Divine Preordainments)]. Those who deny the Day of Recompense.” [Surah Al-Mutaffifin, 7-11].

“And verily, the Fujjar (the wicked, disbelievers, sinners and evil-doers) will be in the blazing Fire (Hell)” [Surah Al-Infitaar, 14].

So lying guides to wickedness, and wickedness guides to hell-fire, we seek refuge with Allāh from it.

The Prophet said “a man will lie”, and in a different narration, “a man will keep telling lies and striving to tell lies until he is recorded with Allāh as a liar”, and lying is from the forbidden things.  Furthermore, some of the scholars have said that it is from the major sins, because the Prophet

warned that the liar will be recorded with Allāh as a liar.

From the greatest lying is what some people do today when they relate a false statement, knowing that it is a lie, in order to make the people laugh.  The Prophet

warned against this in a hadith: “Woe to the one who speaks and lies in order to make people laugh; woe to him, woe to him.”  This is a warning about something which is considered very trivial by a lot of people.

Therefore, all lying is forbidden, and it all guides to wickedness.

However, it was related in a hadith that there are three exceptions to this: During war, when reconciling between the people, and when a woman speaks to her husband or a man speaks to his wife.

Some of the people of knowledge have said though that what is meant by lying in this hadith is tawriyah (deliberate ambiguity or double entendres) and not actual lying.

And they said tawriyah might be called lying, as in the hadith of Abu Hurayrah

said “Ibrahim did not tell a lie except on three occasions.  Two of these occasions were for the sake of Allāh, when he said: “Verily, I am sick” [Surah As-Saffaat, 89], and when he said “Nay, this one, the biggest of them (idols) did it. Ask them, if they can speak!” [Surah Al-Anbiya’, 63]. “The third was regarding Sarah…” (until the end of) the hadith, and he did not lie, but rather he made tawriyah in which he was truthful (about what he had said).

The most severe lying is (for a person) to lie and swear in order to take the people’s money unjustly, such as a person denying a claim made against him concerning a rightful matter and saying “by Allāh I do not owe you anything”, or claiming what is not rightfully his and saying “you owe me this and that” when he is lying.  The person who swears on his claim and lies is making the yameen ghamoos (false oath), which dips the person in sin, and then it dips him in hell-fire, and we seek refuge with Allāh from it.

It has authentically been reported that the Prophet

said “He who swears an oath in which he tells a lie to take the property of a Muslim by unfair means, will meet Allāh while He is angry with him.”  In conclusion, lying is haram, and it is not permissible for a person to lie at all, neither jokingly nor seriously, except in the three exceptional cases mentioned, and in which there is disagreement among the scholars regarding the meaning of the relevant hadith.

Humility in Knowledge – A Forgotten Sunnah