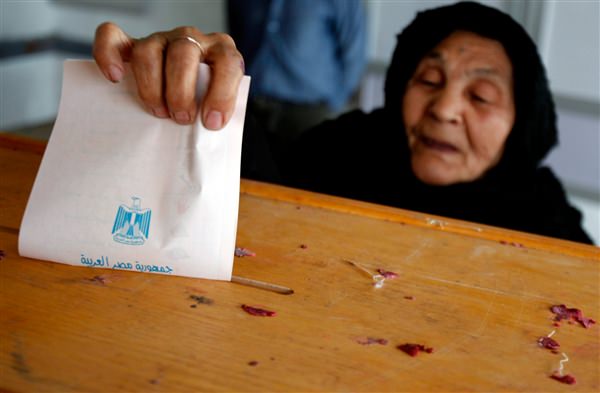 With the choice of an Islamist or a felool for their next president, Egypt’s revolutionaries are dissatisfied and already looking forward to the next uprising.

It is two in the morning, and I wander around a Tahrir Square teeming with activity. Street carts serving chicken liver sandwiches, beans, tea, juice, and sunflower seeds pave the square’s curbs to satisfy Tahrir-goers’ late-night cravings. Hardcore thawar, (revolutionaries) set up camp in and around the square to rest and prepare for the next day’s anti-military rule demonstrations, vowing not to leave until their demands are met. It has nearly been 18 months since the initial uprising that ousted former President Hosni Mubarak, and still, the revolution continues.

Failed Justice for the Revolution’s Martyrs

On June 2, Egyptians watched as Judge Ahmed Refaat delivered a long-awaited verdict that would hold Mubarak, his sons, and some of his closest allies responsible for the death of hundreds of protesters during the revolution that brought his downfall. Mubarak and his Interior Minister, Habib el Adly, were handed life sentences for failing to stop the killings. But when Mubarak’s sons and top security officials were let off the hook, thousands of Egyptians demanding justice angrily descended upon the renowned Tahrir Square once again. As sunset fell, at least a few hundred thousand entered Tahrir to protest against the verdict, while for the next week, the square continued to bustle with protesters.

That night, almost the entire square was grouped into numerous clusters. Instead of lively gossip and teasing, these cliques were engulfed in intensive political debates and discussions. Some people shouted angrily at one another about the innumerable flaws of their presidential runoff candidates (or put forth vehement defenses for them). Others urged their fellow thawar to boycott the elections, while a few delivered impassioned orations about the need for a full revolution revival to anyone who would listen.

What everyone in the square shared that night, however, was a stark dissatisfaction with their candidate options, distain for the country’s current political direction, and outrage that top elements of Mubarak’s security apparatus were let off the hook in the verdict that was supposed to deliver justice to the martyrs of the revolution. Egyptians in the square were confused or cynical; subsequently they turned to their fellow Tahrir-goers as a guiding light.

An Islamist or a Felool

The scene I witnessed in Tahrir on June 2 was a microcosm of the political limbo, that even many non-politically active Egyptians continue to experience from their homes. With over half the Egyptian population having voted for a candidate that will not appear on the ballot on June 16-17, disillusionment with Egypt’s young democratic path is at an all time high. With each remaining presidential candidate comes his own set of inconsistencies with revolutionary aspirations. This weekend, Egyptians will be forced to choose between a conservative Islamist in the Muslim Brotherhood candidate Mohammad Morsi, and a felool (old regime remnant) from the deepest antechambers of the military regime’s old guard, Ahmad Shafiq.

Shafiq’s flaws vis-a-vis the revolution are obvious. Before being installed as prime minister by Mubarak in a failed attempt to appease protesters during the January 2011 revolution, he served as the former president’s aviation minister for nine years. Prior to that he was a member of the Supreme Council of the Armed Forces (SCAF) as Commander of the Egyptian Air Force – position held by none other than Mubarak prior to becoming Anwar el Sadat’s vice president.

Labeled as the quintessential counter-revolutionary candidate by many observers, Shafiq’s agenda will cater as much as possible to restoring the old status quo, maintaining military power over governance, and suppressing the resurging trend of political Islam. His oft-touted campaign promise of bringing “stability and security” back to Egypt in the first 24 hours of his presidency is a potential guise for a fascist-like crackdown on the revolutionary, anti-regime, and Islamist opposition that will inevitably erupt if he wins the election.

How then, could such a regressive anti-revolutionary candidate make it this far in the Egyptian elections? Indeed, Shafiq’s success certainly blindsided many Egyptians, who dismissed his campaign as the SCAF’s feeble attempt to achieve democratic legitimacy.

The answer is dual pronged: First, Shafiq’s appearance on the runoff ballot is not so much a testament to the strength of the counter-revolution as it is a lack of cohesion amongst those who are pro-revolution. The so-called “liberal” candidates scraped together over 50% of the popular vote. However, the liberal vote was split. Amr Moussa and Abdel Moneim Aboul-Fotouh who seemed poised to make it to the runoff at the very least, lost large amounts of their votes to Hamdeen Sabbahi. The populist Nasserist candidate was virtually unheard of a month before the election, as the media shined its limelight on Moussa and Aboul-Fotouh, previously dubbed the “frontrunners.” But after televised debate between the two, many Egyptian liberals reexamined their options and opted for Sabbahi who vowed to restore Egypt’s dignity and champion the cause of the common man. Still, his surge of support was not enough to beat Morsi and Shafiq, two candidates with established political bases – the Muslim Brotherhood and the old guard.

Second, Shafiq capitalized on the fear stemming from prospects of a theocratic state, given the rise of political Islam in Egypt. He is seen as the safest bet for secular and Christian Egyptians who find comfort, given his degree of association with the old regime. Some believe Shafiq is willing to quash the Islamist trend.

Meanwhile, unlike Shafiq, Morsi’s electoral success in the first round was not a surprise. The Muslim Brotherhood developed an apt political know-how while they were forced to function underground in order to survive sixty-plus years of harsh political repression. Over the years, the Brotherhood developed a “parallel Islamic sector” – an extensive network of professionals, intellectuals, social welfare workers and religious activists whose outreach has touched the lives of millions of Egyptians over the years, especially the underprivileged. Now that the Brotherhood functions legally and without the fear of imprisonment, its network has evolved into a full-fledged political machine, able to mobilize thousands of volunteers at short notice. This, coupled with the resurgent trends of Islamic conservatism, makes Morsi and the Brotherhood a political force to reckon with.

Nonetheless, many Egyptians have serious qualms with Morsi and the Brotherhood. The anti-Morsi crowd’s most pronounced fear is that Egypt will take an Iran-like turn towards theocracy under his helm. With ultraconservative Salafis and the Muslim Brotherhood already dominating both upper and lower houses of parliament and the committee that will oversee the drafting of the new constitution, opponents fear that Brotherhood control of the executive branch will extend a carte blanc to Islamists seeking to apply Shari’a law in a strict codified form à la Saudi Arabia. Under the strict application of Shari’a, many Egyptians feel that their personal freedoms will be severely curtailed.

While I was vacationing in a Red Sea resort, a souvenir shopkeeper pulled me aside and begged me to vote for Shafiq for his own sake. He felt that tourists will be turned off by an Islamist tide, and that current historically low levels of tourism will not recover if an Islamic regime bans alcohol.

Members of Egypt’s Christian population – 10% of the country’s 80 million – are terrified that their religious freedoms will diminish and that those carrying out sectarian violence will be emboldened. Morsi exacerbates fears of long-term Islamic rule when he spells out his 25 year Nahda (Renaissance) plan for Egypt’s reformation. The plan outlines the Muslim Brotherhood’s intentions; they do not simply plan on taking office for the next four years, but they are in it for the long haul.

With flaws on both sides of the ballot, Egyptians are torn between two “evils”; should they betray the revolution and empower the old regime, or opt for a man who may usher in a religious era that restricts personal freedoms. Like the confused and disenchanted in Tahrir, many are stumped.

Abanoub Samir, a 21-year old member of the Ultras Ahlawy angrily stated: “screw them both.” When pressed, he said he will end up having to vote for Morsi – as much as he hates him – because he cannot risk empowering the old regime.

Reluctant support is the cornerstone of this election. The outcome of the vote depends not on the size of each candidate’s political base, but on the amount of wary supporters it can drag along with them. Many of Shafiq’s supporters do no like him but they hate Morsi, and vice versa. Indeed, Egyptians are forced to choose between a rock and a hard place.

Asmaa Mahfouz, a prominent pro-democracy activist whose famous YouTube video in January 2011 was credited with inspiring Egyptians to galvanize in Tahrir Square, has boycotted the election for this reason. “We already know Shafiq will win. The SCAF put him in the elections, ran the elections, and now the SCAF will see him through,” she argued. Mahfouz is amongst the growing portion of Egyptians who are boycotting the vote. Analysts have predicted that the run-off will yield the lowest turnout yet.

“It’s a corrupt election by a corrupt regime that never left. There will not be legitimate elections so long as the SCAF remains in power,” claimed Mahfouz. She went on to argue that: “true victory for the Egyptian revolution means taking power from the military regime and installing a civilian authority. The last revolution failed, and we need a new one to oppose the SCAF.”

Dissatisfied and dismayed with their options for a new leader, the aspirations of the revolutionary youth are under siege. Indeed, activists like Mahfouz are already looking ahead to Egypt’s next uprising.

PSSST Ahki (Brother) the Colorado Shooter James Holmes was NOT a Terrorist!