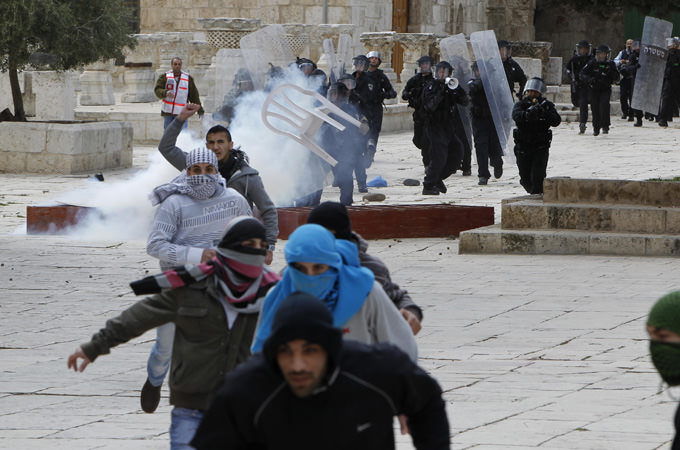 There was unrest at Al-Aqsa mosque all week afters calls from right-wing Jewish websites to push Muslims off the site. Jews hold the space sacred as it is the site of the Temple Mount; they pray below the plaza and are not allowed in the area. Muslims responded by converging at the Mosque to confront a possible take over. Tensions reached their peak and there were clashes between police and Palestinians after Friday prayers. Following are excerpts of what was reported in a different new sources:

Several hundred Palestinians clashed with Israeli police at Jerusalem’s holiest site on Friday, after calls posted on right-wing Jewish Internet sites for Jews to push Muslims from it prompted Palestinians to mass there in resistance.

Anticipating trouble, police officers, as well as Palestinian news photographers, gathered at the site of the expected standoff, the plaza by Al Aksa Mosque and the Dome of the Rock, two of Islam’s holiest shrines, which sit above the remains of two Jewish temples. Tensions have always been high over control of the space, known to Jews as the Temple Mount and to Muslims as the Noble Sanctuary.

Jews pray below the plaza at the Western Wall and are not permitted to engage in religious rituals or prayer in the plaza, but small groups occasionally try to anyway.

A police spokesman said that Jews did not try to enter the plaza on Friday. But some among the crowd of Palestinians threw stones at the police officers at its entrance. Some barricaded themselves in the mosque. The police said they used stun grenades to disperse the crowd. Each side reported about a dozen light injuries. The police arrested four Palestinians.

Israeli police clashed with hundreds of Palestinians throwing rocks after Muslim prayers at Jerusalem’s most sensitive holy site on Friday, while Israeli troops opened fire on protesters at a separate demonstration in the West Bank, killing one Palestinian.

It was not immediately clear what set off the confrontation at the Jerusalem shrine sacred to both Jews and Muslims. However, there have been heightened tensions in recent days, with rumors circulating among Palestinian activists that far right Israelis are trying to gain entry to Muslim-controlled areas at the site. The rumors were false, according to Israeli police.

Violence has repeatedly erupted in the past at the Al-Aqsa Mosque compound, which sits atop the remains of the two biblical Jewish temples. It is the most sacred site in Judaism and is Islam’s third-holiest site.

The shrine looms large in the rival narratives of Israelis and Palestinians, and any perceived attempt to change the delicate division of control there quickly sets off protests.

Later in the day, a Palestinian died of wounds after being shot by Israeli troops during a demonstration near Ramallah in the West Bank. The Israeli military said Palestinians protesting the events in Jerusalem threw rocks and firebombs at soldiers stationed nearby, prompting a soldier to open fire.

Four people were arrested in clashes near the al-Aqsa mosque after Israeli police officers entered the compound where the mosque is situated and used stun grenades to disperse stone-throwing rioters, an Israeli police spokesman said.

Witnesses at al Aqsa said police had also fired tear gas, forcing a number of women to run for cover inside the adjacent Dome of the Rock.

“We were praying when they started shooting tear gas towards us,” 58-year-old Umm Mohammad told the AFP news agency by telephone from inside the Dome of the Rock.

“At first, they were shooting at the Al-Aqsa mosque but we hid in the Dome of the Rock, and now they have started firing tear gas and sound bombs towards the gates,” she said.

“Women were terrified and screaming at first, but we got over it and started shouting ‘Allahu Akbar’ (God is greatest),” she said.

The clashes followed nearly a week of unrest at the walled complex.

In another outbreak of violence in the southern West Bank city of Hebron, soldiers clashed with demonstrators who participated in two separate protests, and soldiers arrested four people, an Israeli military spokesman said.

Why Do We Need Discussions On Disability At Our Mosques