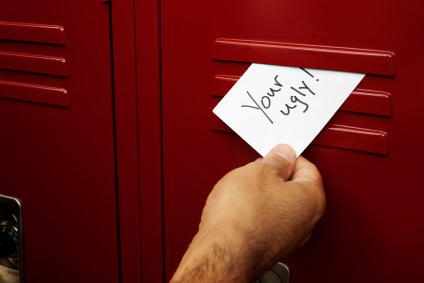 Noora runs into the house and slams the door behind her.  She bounds up the stairs and her mother hears her bedroom door slam.  She audibly sighs sadly thinking to herself, “She had another bad day at school.  I wish she would talk to me about it.”  Noora curls up on her bed and cries quietly wondering what she did to deserve what she goes through at school everyday.  Sometimes she even finds herself wishing she could just get a physical “beat down” rather than suffer through the daily emotional torment of being teased, ostracized and singled out for abuse.  She feels as though her mother won’t understand what she’s going through and she also doesn’t want to disappoint her by confessing that she just doesn’t know how to handle the bullies.  She feels hopeless and she doesn’t know to whom to turn so she cries quietly in her room, and each day holds in more and more of the torment she faces.

Parents often feel completely powerless as they witness their child’s tears day-after-day, as much a part of the afterschool routine as homework.  Bullying has reached a new peak in our society and with tragedies such as the shooting at Columbine, bullying has received a great deal more attention than it used to. With the advent of technology, bullying no longer occurs exclusively within the walls of schools.  Rather, social media has provided another opportunity to bullies who seek to demean others.  Home is no longer a safe haven for victims of bullying; a Facebook status can hurt just as much, if not more, than hearing the typed words spoken aloud.

The Victims of Bullying

Being the victim of bullying can evoke a great deal of shame in children and teens (and in adults as well, since bullying is not an epidemic that exclusively targets children).  Therefore, your child may not confide in you and may go through great pains to hide the fact that s/he is being bullied.  The signs may not be as visible as a black eye; although children are often physically intimidated, bullying can be also be targeted in a way that leaves psychological and emotional bruises.  Some things to keep a lookout for, which may signal that your child is being bullied includes (but is not limited to): damage to personal belongings, unexplained injuries, a decline in academic performance, physical complaints (i.e. stomach aches, headaches, tiredness, etc.), reluctance when going to school or riding the bus, few friends, or a noticeable change in sleeping or eating habits.

There are certain qualities that may make some children more susceptible to bullying.  These include the following characteristics: cautious, sensitive, quiet, withdrawn, shy, anxious, insecure, low self-esteem, unhappy, lack of a close friend, relate better to adults than peers, physically weaker than peers.  Bullying is a cycle, so these characteristics can be just as much a consequence as a partial cause of being victimized.  There is also another subset of people within this bullying cycle who are characterized as bully/victims, who are both bullies and victims of bullying simultaneously.  Bully/victims tend to experience a greater variety of symptomology including both internalized (anxiety, depression, suicidal thoughts) and externalized (hyperactivity, rule-breaking) issues[2].

Although the focus of prevention and interventions are often on victims of bullying, it is important to provide support to bullies as well.  As the Prophet (peace be upon him) said,  “Help your brother, whether he is an oppressor or he is oppressed.” The Prophet was asked: “It is right to help him if he is oppressed, but how should we help him if he is an oppressor?” He replied: “By preventing him from oppressing others.” (Ṣahīh Bukhāri, Volume 3, Ḥadīth 624)

From this ḥadīth, we learn the importance of helping those who are oppressed but, even more profoundly, the need to assist oppressors by stopping them from committing this infringement on the rights of others.  Bullies are often misconstrued as people who simply take pleasure in the pain of others.  However, research has found that some are quite complex and somewhat of a mystery.  Many research studies have found that bullies are more likely to exhibit behavioral issues including aggressiveness, hyperactivity, attention deficits and conduct problems.  However, contrary to what is normally considered of bullies, one research study found that they suffer from depression, anxiety, psychosomatic disorders, and eating disorders to the same extent as those who were victimized by their bullying[3].  Some things that may signal that your child is bullying others include: being aggressive with others, gets sent to detention often, has unexplained new belongings or extra money, quickly blames others, refuses to accept responsibility for actions, and has a need to win or be the best at everything.

Interactions between individuals, from an Islamic point of view, are governed by the fundamental right of sanctity of life, honor, and property.  Therefore, anything that compromises these rights should be stopped.  In Sūrat’l- Ḥujurāt (49:10-12), Allah says, “Verily, the believers are brothers…

These verses emphasize the non-physical face of bullying.  Verbal and emotional bullying can have even greater and longer-lasting negative effects on the victims than physical bullying.  Many of us may have grown up asserting the maxim, “sticks and stones may break my bones, but words will never hurt me,” however, we soon realize that sometimes words can hurt more than anything else.

According to Rachel Simmons’s Odd Girl Out: The Hidden Culture of Aggression in Girls[4], this type of bullying is particularly common among girls and often goes unnoticed by non-participants (such as teachers and parents).  Due to the expectation of girls to be sweet, nice and caring, direct aggression is deemed unacceptable in them.  However, girls are just as likely as boys to experience anger, a natural human emotion, so they engage one another in nonphysical, alternative forms of aggression.  This includes:

Rather than using physical intimidation as a weapon, relationships are used for leverage.  What could be worse than the threat of loneliness and social isolation as you wander friendlessly through the halls of school?  Hearing lies spread about you to cause you to lose your friends and fall into a downward spiral of lowering self-esteem?  One of the issues inherent in these forms of alternative aggressions is the fact that they can easily be committed under the radar of others.  Teachers are often caught unaware when their students speak with them about this type of bullying and don’t know how to deal with it since it is not easily spotted.  When engaging in covert aggression, the bullies often seem like the type of people who would never mistreat someone; it’s the perfect disguise for accomplishing as much damage as possible while ensuring their actions are undetectable to others.

Girls in this type of situation often have nowhere to turn; they may feel too ashamed to speak to their parents or teachers about the torment they’re enduring because they may feel as though they have failed at a fundamental rite of passage – making friends.  There is also a great deal of uncertainty regarding these alternative aggressions; girls may question, “Did she just bump into me on purpose?;” “Did she roll her eyes at something I said?;” “Is that note she’s passing about me?” It’s easy to know when someone gives you a black eye, but if you’re uncertain whether others are shutting you out or teasing you behind your back, it becomes much more difficult to discuss it with others.  By the same token, many girls withstand emotional abuse from their close friends in order to maintain the inclusion as a part of a group; they fear that the creation of any conflict (including voicing their concerns) will cause them to lose a relationship.  Due to this, anger continues to simmer and issues pile up and are rarely addressed.

It is incredibly important to arm our children, our students, and ourselves with the proper methods of coping with bullying.  This is not simply a rite of passage that children must endure. Furthermore, the issues brought about by bullying can quickly, and dangerously, spiral out of control.  In the next segment, practical tips and possible solutions will be offered to promote healthy relationships.