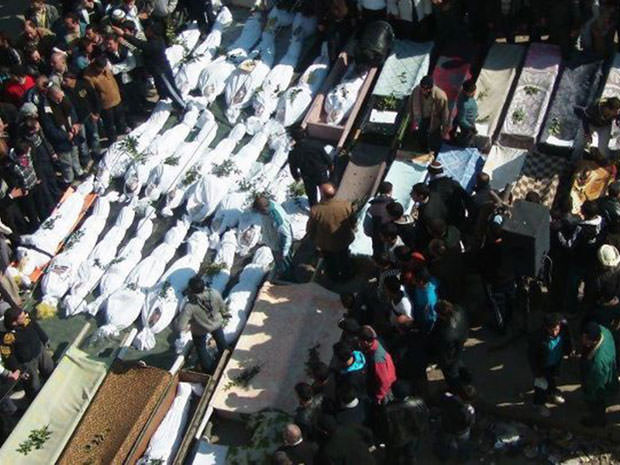 Western and Arab nations mounted the biggest diplomatic push in weeks to end Syria’scrackdown on the opposition on Friday, but the talk in a marble-lined Tunisian hotel risked being overtaken by the increasingly vicious armed conflict on the ground.

Foreign ministers from more than 50 countries in Tunis for the inaugural “Friends of Syria” meeting marshaled international condemnation of Syrian President Bashar al-Assad and ratcheted up the pressure on him to step dcown.

They met against the backdrop of a surge in government attacks on the city of Homs, an opposition stronghold, and mounting world outrage over violence that has killed thousands of people during the uprising.

U.S. Secretary of State Hillary Clinton warned Assad — and his backers inside Syria and abroad — that they will be held to account for the crackdown on opponents and what she described as a humanitarian catastrophe in Syria.

Addressing her comments to Russia and China, which vetoed tough action on Syria in theUnited Nations, she said: “They are setting themselves not only against the Syrian people but also the entire Arab awakening.”

“It’s quite distressing to see permanent members of the Security Council using their veto when people are being murdered – women, children, brave young men — houses are being destroyed. It is just despicable.”

“I am convinced Assad’s days are numbered, but I regret that there will be more killing before he goes,” she said.

Diplomatic moves though are hamstrung by the fact that, so far at least, there is little appetite for military intervention in Syria and attempts to ease Assad out via the United Nations Security Council have been stymied by Russian and Chinese vetoes.

Beijing and Moscow declined invitations to attend the meeting in Tunisia.

In a tacit acknowledgement that the scope for pressuring Assad through diplomacy is limited, some of the delegates at the conference — especially Gulf states long opposed to Assad — pressed for an international peacekeeping force in Syria and favored arming the Syrian rebels.

The Syrian opposition, meanwhile, appeared to be taking matters into its own hands, saying it was supplying weapons to rebels inside Syria while Western and other states turned a blind eye.

Another hawk, Qatar’s Sheikh Hamad bin Jassim al-Thani told the Tunis meeting an Arab force should be created to open and protect humanitarian corridors between opposition strongholds and Syria’s neighbors.

Syria’s President Bashar al-Assad has called a constitutional referendum that would effectively end nearly 50 years of single-party rule, according to state media, amid assaults by security forces on Hama and other opposition strongholds.

A day after rejecting UN allegations of crimes against humanity, Assad called the referendum for February 26.

The proposed charter drops Article 8, which declared the ruling Baath Party as the “leader of the state and society”, allowing for a multi-party system, state television said on Wednesday.

The president, who must be a Muslim man, can serve a maximum of two seven-year terms, although it is unclear if this would apply to Assad, who is already in his second term.

In April, Assad ended emergency rule, in force since 1963 when the Baathists took power in a coup d’etat. But he has repeatedly promised reforms that have failed to materialise since the uprising erupted in March.

The 46-year-old Assad, who succeeded his late father Hafez in 2000, has said the constitution would usher in a “new era” for Syria, the SANA state news agency said.

“When the new constitution is approved, Syria will have passed the most important stage” of reforms, bringing a “brilliant future for next generations,” Assad was quoted as saying. Read rest here.

February 10th, 2012: Bombs hit the city of Aleppo; the second city to face escalating violence following the shelling of Homs

The broadcaster quoted the health ministry as saying that 28 people were killed and more than 200 others wounded, including soldiers and civilians.

“The number of casualties from the two car bombs in Aleppo has risen to 28 dead and 235 wounded,” the ministry said.

Mangled, bloodied bodies as well as severed limbs lay on the pavement outside the targeted buildings, as shown in live footage on Syrian television

Arif al-Hummoud, a commander of the Free Syrian Army, a name used by various armed groups, told Al Jazeera that opposition fighters had carried out an attack but were not responsible for the bombings.

“A group from the Free Syrian Army attacked a branch of the military security and a security unit in Aleppo with only RPGs and light weapons,” he said.

“The tanks entered the neighbourhood of Inshaat overnight,” said Rami Abdel Rahman, head of the Syrian Observatory for Human Rights.

He said troops were still deploying to the area early Friday – the seventh day of a flaying attack on the city which is the epicentre of the rebellion against Assad.

Activists told the Reuters news agency that the rebels fear the tank reinforcements are a prelude to a major push to storm residential areas – where hundreds of thousands of people are trapped.

Outgunned rebels loosely grouped under the Free Syrian Army have been preparing to counter the onslaught.

A spokesman for the rebel army said it was difficult to predict when a major attack would come but claimed Assad did not have sufficient loyalist forces to control the city.

“Assad’s forces are relying on shelling because they do not have the numbers. We are talking about large residential areas with a big population they would have to subdue,” Major Maher al-Naimi said from Turkey.

Naimi said the Free Syrian Army will defend the city “to the last drop of its blood”.

Read more at The Telegraph

Armed forces loyal to President Bashar Assad barraged residential buildings with mortars and machine-gun fire, killing at least 30 people, including a family of women and children during a day of sectarian killings and kidnappings in the besieged Syrian city of Homs, activists said on Friday.

Video posted online by activists showed the bodies of five small children, five women of varying ages and a man, all bloodied and piled on beds in what appeared to be an apartment after a building was hit Thursday in the Karm el-Zaytoun neighborhood of the city. A narrator said an entire family had been “slaughtered.”

The video could not be independently verified.  Heavy gunfire erupted for a second day on Friday in the city, which has seen some of the heaviest violence of the 10-month-old uprising against Assad’s rule. Activists said at least four people were killed. In an attempt to stop the bloodshed in Syria, the UN Security Council was to hold a closed-door meeting Friday to discuss the crisis, a step toward a possible resolution against the Damascus regime, diplomats said. The UN says at least 5,400 people have been killed in the government crackdown since March, and the turmoil has intensified as dissident soldiers have joined the ranks of the anti-Assad protesters and carried out attacks on regime forces.

Details of Thursday’s wave of killings in Homs were emerging from an array of residents and activists on Friday, though they said they were having difficulty because of continuing gunfire.

“There has been a terrifying massacre,” Rami Abdul-Rahman, director of the British-based Syrian Observatory for Human Rights, told the AP on Friday, calling for an independent investigation of Thursday’s killings. Read rest in Today’s Zaman.

Dubai: More than 110 people were killed on Thursday night and Friday as the Syrian government forces pounded the restive cities of Hama and Homs amid violence spiraling out of control.

The region watched in shock as a video posted online by activists showed the bloodied bodies of five small children, five women of varying ages and a man, in the Karm Al Zaytoun neighbourhood of Homs.

“The violence in Syria increased in a significant way between January 24 and 27,” head of the Arab monitoring mission General Mohammad Ahmad Mustafa Al Dabi said as dozens of tanks were deployed in Douma, a suburb of Damascus. – Gulf News

SAQBA, Syria — If the scene here on Friday was anything to judge by, the armed opposition to the Syrian government was making inroads and had won control of this town at the doorstep of the capital, Damascus, and perhaps of several other neighborhoods, signaling an escalation of violence in this beleaguered country.

At a funeral for one of the more than 5,400 victims of Syria’s unfolding civil war, fighters from the opposition Free Syrian Army kept watch, their faces covered with scarves and balaclavas as they stood at the edge of a square, carrying assault rifles and grenade launchers. Thousands of demonstrators marched behind the coffin beneath the green, white and black banner of the opposition — not the Syrian government’s flag. Suspected state security agents were grabbed by the crowd. Read rest here.

Omar, who is originally from Homs but who is living in exile in Istanbul told me: ‘This is our right … It is our right to take up arms and we are not going to shy away from this any longer. We are being killed. We waited for any action from the Arab League and the United Nations and none was forthcoming. All they have been doing is stalling and that has given the regime time to crush the revolution,’ he said.

“Omar explained that military councils are now being set up in governorates across Syria. It is part of efforts to organise a command structure. Councils that will be made up of civilians as well as army defectors. ‘Yes, civilians who want to hold weapons are joining our struggle,’ he said.

Israel is preparing to receive Syrian Alawite refugees on the occupied Golan Heights if the Bashar al-Assad government collapses, Israel’s army chief of staff has said.

It is the first time that a senior Israeli official has raised the possibility that members of the Alawite minority, which includes the Assad family, could seek refuge in Israel in order to escape an expected backlash in the event the government crumbles.

“On the day the Assad regime falls, it is expected to harm the Alawite clan. We are preparing to receive Alawite refugees on the Golan Heights,” Lieutenant-General Benny Gantz told MPs at the parliamentary committee on foreign affairs and defence on Tuesday, in remarks communicated by a spokesman. Read rest here.

In Police Training, a Dark Film on U.S. Muslims