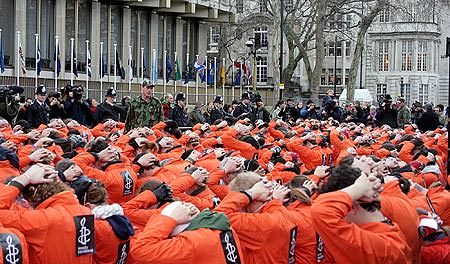 On the second day of his inauguration, President Obama signed executive orders calling for the closure of Guantanamo Bay within a year. Three years later and as his first term approaches an end, the notorious detention facility, illegal by international standards, remains open with no signs of a closure.

Guantanamo Bay violates every possible standard laid out for an imprisonment facility; hence the rationale for building it on a naval base in Cuba. It denies prisoners protections guaranteed by the Geneva conventions, holds them indefinitely without laying charges and effectively bars them from having any chances at a fair trial.

Injustice and lies are the foundational pillars that hold up Guntanamo Bay. Prisoners at the facility are subjected to unprecedented forms of torture. This includes solitary confinement, forced feedings, sexual abuse, waterboarding and beatings. Many inmates have tried to commit suicide; six so far have succeeded. Lakhdar Boumedine, who went on a hunger strike and was held for seven years without explanation, recalled: “Twice each day my captors would shove a tube up my nose, down my throat and into my stomach so they could pour food into me”.

Murat Kurnaz of Germany was captured while in Pakstian studying the religious sciences and wrongly detained for five years. He explained: ‘There were more beatings, endless solitary confinement, freezing temperatures and extreme heat, days of forced sleeplessness”. An FBI agent once observed that, “on a couple of occasions, I entered interview rooms to find a detainee chained hand and foot in a fetal position to the floor, with no chair, food or water. Most times they had urinated or defecated on themselves and had been left there for 18, 24 hours or more”. What is sickening is that abuse at other U.S. detention facilities, such as Abu Ghraib and Bagram, is far worse.

Many of the ‘war combatants’ at the facility have been innocent civilians with no evidence of terrorist activities. They were simply at the wrong place at the wrong time and were caught while fleeing the invasion of Afghanistan. The Tipton Three and many others fall in this category. Some were simply handed over to the Americans based on shady evidence in return for thousands of dollars. Kurnaz was an example of this.

Since most of the inmates at the facility are Muslims, religious persecution has been a complaint as well. There have been horror stories of Qurans being defaced and flushed down toilets. Prisoners have been reprimanded for praying in congregation. Some even reported attempts by guards to get them to renounce their religion.

Civil liberty groups rejoiced as Obama came into office, but his efforts to actually shut down Gitmo are laughable. The President has since signed executive orders that formalize the indefinite detention of prisoners at the facility. To top up the Patriot Act, he also added new provisions in the National Defense Authorization Act that codify the indefinite detention of American citizens suspected of terrorism. The NDAA also forbids the government from using money to build a new prison or to bring detainees to the U.S., even to face trial. This virtually ends any possibility of shutting down the prison and effectively builds on the detention scheme laid out by the Bush administration.

This establishment creates a two tiered justice system; one for the bad and one for the worst. The irony is, many times the evidence against the latter is so poor that it is insufficient to lay charges or bring them to trial. Guantanamo Bay is an apparatus that gives Americans satisfaction that the perpetrators of terrorism are being punished and their country is secure. This comes at the high cost of sacrifices in human rights, civil liberties and rule of law, not to mention the millions of tax dollars spent on it.

Once the beacon of freedom, liberty and justice; America is slowly losing her status as the bastion of democracy. Illegal wars, extra judicial killings, arrests of innocent civilians, opportunist and hypocritical foreign policies all add to the abuses going on at Guantanamo Bay. Ten years past 9/11 and after the killing of Osama Bin Laden, there are no signs of an end to this disgraceful institution.

More information:
Guantanamo: By the Numbers
Notes From a Guantánamo Survivor